Policy Basics: Where Do Our State Tax Dollars Go?

Understanding where state tax dollars go ― and the trends in state spending ― can help state policymakers make good decisions about how to pay for important services now and in the future.

States help educate the nation’s children, build and repair its roads and bridges, provide health coverage to low-income families and their children, and much more. Many of these services are essential to building strong, healthy communities and the nation’s long-term economic vitality.

By far the largest areas of state spending, on average, are education (both K-12 and higher education) and health care.

In total, the 50 states and the District of Columbia spent $1.2 trillion in state revenues in fiscal year 2016, according to the most recent survey by the National Association of State Budget Officers. (This figure does not include the federal funds that states also spent that year.)

By far the largest areas of state spending, on average, are education (both K-12 and higher education) and health care. But states also fund a wide variety of other services, including transportation, corrections, pension and health benefits for public employees, care for persons with mental illness and developmental disabilities, assistance to low-income families, economic development, environmental projects, state police, parks and recreation, housing, and aid to local governments (see chart).

As a share of state spending, education has remained fairly constant over the last decade. The share of state budgets devoted to Medicaid has grown, the share devoted to corrections and transportation has fluctuated some, and the share for cash assistance to low-income families has declined.

Most State Dollars Go Toward Education and Health Care

Three areas of spending make up over half of state spending, on average:

States are one of the main funders of the nation’s public elementary and secondary schools, which some 51 million students — nine out of ten enrolled school-age children — attend. More than one-fourth of state spending on average, or about $316 billion, goes toward public education. States generally provide grants to local school districts (or to cities or counties, where those entities are responsible for administering schools) to fund schools, rather than paying teacher salaries and other school costs directly. Local governments are the other primary funder of public schools. The federal government provides only about 8 percent of public school revenues.

States play a large role in funding higher education through their support of public community colleges, university systems, and vocational education institutions. This support accounts for about 14 percent of state spending, or some $167 billion.

Along with the federal government, states fund health insurance for low-income families through Medicaid and the Children’s Health Insurance Program. These programs provide health coverage or coverage for long-term care to roughly 74 million low-income children, parents, elderly people, and people with disabilities in a typical month. Together, they constitute about 17 percent of state budgets, or about $209 billion.

States spend the remainder of their budgets on a wide variety of programs.

States are one of the main funders of the nation’s public elementary and secondary schools, which some 51 million students — nine out of ten enrolled school-age children — attend.

State funding for transportation totals some $69 billion, accounting for around 6 percent of state spending, on average. These funds are used primarily to build and repair roads and bridges and for public transit systems.

Prisons, juvenile justice programs, and parole and other corrections programs make up about 5 percent of state budgets, or $56 billion.

Cash assistance to low-income individuals through Temporary Assistance for Needy Families and some smaller programs, such as general assistance, makes up only a tiny share of state spending — about 1 percent or $11 billion.

Comparable national data do not exist for the individual areas of spending that make up the remaining 32 percent of state budgets. But some of the larger items in this “Other” category are contributions to public employees’ pension and health benefits and general aid to local governments.

The Spending Mix Varies From State to State

Though the spending mix varies from state to state, tax dollars raised in states fund essential services — and tax cuts at a time when revenues are weak place those services at risk.

The figures above show how states spend their tax dollars on average for the entire country. But the specific mix of spending varies from state to state, depending on such factors as how the state and its localities share funding responsibilities for public services and how much state policymakers choose to invest in health care, education, and other areas.

In some cases, this variation is significant. For example, South Dakota spends 16.7 percent of its budget on K-12 education, while Vermont, at the other end of the spectrum, spends nearly 48 percent. Similarly, Medicaid makes up only 8 percent of the state budget of Wyoming but 27 percent in Missouri.

Though the mix varies from state to state, tax dollars raised in states fund essential services — and tax cuts at a time when revenues are weak place those services at risk. 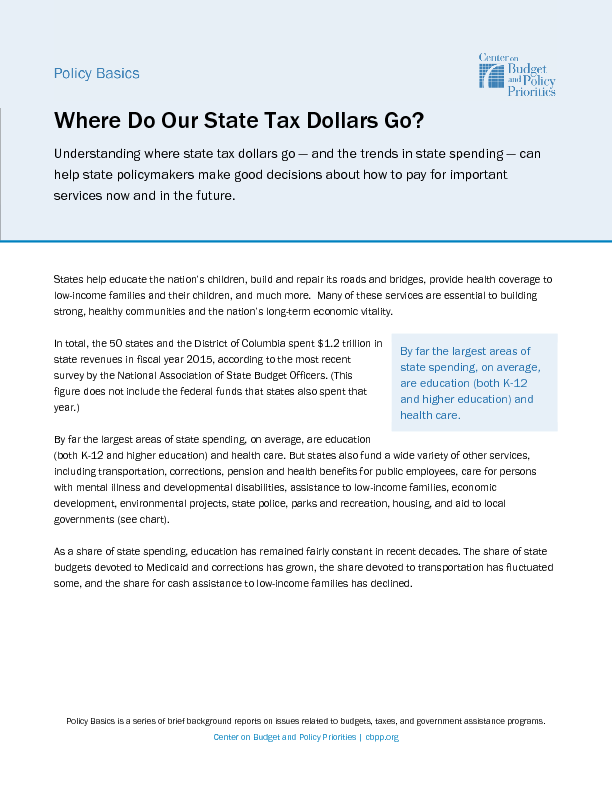