Social Security Does Not Need a “Bailout”

Alarmists’ Claims Are Unjustified, But Action is Needed to Ensure Long-Term Solvency

In recent months, a few commentators have sounded an alarm about the recession’s impact on Social Security’s near-term prospects, which may lead some people to think that the program faces financial problems in the next several years. Fortunately, that is not the case. Social Security continues to run annual surpluses and remains capable of paying scheduled benefits in full for nearly three decades. 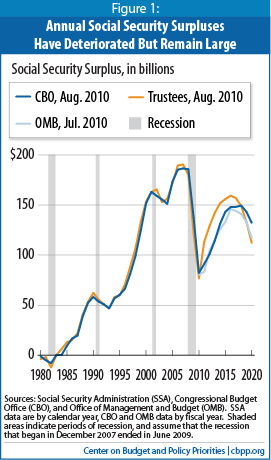 The deep recession has indisputably affected the Social Security system’s finances, as is visible in the latest projections by the Social Security trustees and by the independent Congressional Budget Office. But both organizations estimate that, under current trends, the program can continue to pay full benefits from the trust funds until 2037. Thus, Social Security faces no immediate threat.

Nevertheless, Congress and the Administration should act sooner rather than later to restore Social Security’s long-run solvency. Prompt action would allow changes to be phased in gradually and afford people ample time to adjust their financial plans.

Despite some media reports[1] that Social Security is “running in the red” and will need a “bailout” soon, the numbers say otherwise:

Policymakers Will Need to Act Soon to Shore Up Disability Program

It is expected, however, that lawmakers will act before then to reallocate some payroll tax revenue between the two Social Security trust funds, as they often have done in the past. That would enable the combined trust funds to last for nearly three decades. Congressional action will be needed to extend the combined funds beyond that and restore long-term solvency to the program.

Social Security outlook more than those previous downturns, but it has not erased the trust funds’ surplus or endangered the program’s ability to pay currently promised benefits in the near term.

The trust funds’ condition thus differs sharply from the situation in early 1983 — another period that followed a deep recession. Then, not only did the program run deficits, but the funds’ balance skated dangerously close to zero, and benefits were imperiled until Congress stepped in with a rescue package.[3] In contrast, today the funds are running annual surpluses and own over $2.5 trillion worth of securities.

Since the mid-1980s, the Social Security trust funds have steadily collected more in payroll taxes and other income than they have needed to pay benefits and administrative costs. They have used that excess to purchase Treasury bonds — over $2.5 trillion worth at the end of fiscal 2009, bearing an average interest rate of 4.7 percent. CBO expects the funds to earn $120 billion in interest income in 2010.

Excluding interest, the Social Security surplus is indeed negative in 2010 through 2013 in CBO’s latest projections. Put another way, in those years Social Security will pay out more in benefits than it will collect in payroll and income taxes.

That matters to the Treasury; when Social Security generates less extra cash, the government has to tap the credit markets to borrow more. The slump in payroll-tax revenues is just one symptom of the severe economic downturn; from 2008 to 2009, for example, Social Security revenues fell by 1 percent, while all other revenues fell by a stunning 22 percent.[4] Investors accept that today’s large deficits result partly from cyclical factors, and — so far — have willingly lent to the Treasury at historically low interest rates. Economic recovery will bolster the overall budget including Social Security. Late in the decade, however, the Social Security surplus will deteriorate again, as demographic pressures accelerate with the retirement of the baby boomers.

From Social Security’s standpoint, the trust funds will continue to grow as long as there is a surplus from the program’s tax revenues and interest income combined. In brief, commentators who focus on Social Security’s cash flow excluding interest are describing the program’s impact on the Treasury’s need to raise cash in the private credit markets. That is an important issue, but it has little significance for Social Security’s ability to pay benefits in the years ahead.

The Social Security Board of Trustees released its annual report on August 5.[5] The Social Security actuaries and CBO do their projections independently; they often differ in detail but generally tell a similar story. The trustees’ projections extend for 75 years to help put short-term fluctuations (like the current recession) into perspective.

Three key dates often receive attention. In this year’s report, those are:

It is important to remember that neither the first nor the second “key date” has any programmatic significance, although they help to illuminate Social Security’s effect on the overall budget.

The fact that Social Security can pay full benefits for nearly another three decades does not mean that policymakers should wait that long to address program solvency. To the contrary, they would do far better to address the challenge sooner rather than later, by carefully crafting a package that spreads sacrifices fairly across generations and income groups and allows those affected ample notice so that they can adjust their financial plans accordingly.

Social Security’s imbalance is manageable in size and poses a far less thorny challenge than the relentless growth in health-care costs. [8] And the possible solutions are well known. Various organizations have laid out options for fixing the Social Security system with tax increases, benefit reductions, or some blend of both.[9] Some also urge carefully targeted benefit enhancements to improve the system’s adequacy for vulnerable recipients. Although there is no imminent crisis in Social Security, tackling the problem soon could enable a fair, balanced solution while assuring creditors that the United States is getting its fiscal house in order.

[3] That success is often credited to a commission headed by economist Alan Greenspan, but a recently released portion of a memoir by Robert M. Ball (a member of the commission and a former Commissioner of Social Security) makes clear that the real impetus for the 1983 reforms was the commitment of President Reagan and House Speaker Tip O’Neill to work out a bipartisan compromise that would extend Social Security solvency. Not only did they establish the commission and charge it to produce a balanced package of reforms — including both tax increases and reductions in benefits — but when the commission deadlocked, their emissaries worked out an agreement on a package and persuaded the commission to adopt it. See Jackie Calmes, “The Bipartisan Panel: Did It Really Work?,” New York Times, January 18, 2010.

[4] “All other revenues” consist of individual and corporate income taxes, payroll taxes other than for Social Security, and other sources such as excise and estate and gift taxes. Of the 22 percent drop between 2008 and 2009, about 4 percentage points stemmed from tax cuts enacted in the American Recovery and Reinvestment Act (ARRA).

[5] The 2010 Annual Report of the Board of Trustees of the Federal Old-Age and Survivors Insurance and Federal Disability Insurance Trust Funds , http://www.ssa.gov/OACT/TR/2010/index.html.

[6] Congressional Budget Office, The Long-Term Budget Outlook, June 2010 (revised August 2010). 2037 is the expected date of trust-fund exhaustion under CBO’s “alternative fiscal scenario,” which assumes that most of the tax cuts that were enacted in 2001 and 2003 (and which are slated to expire after 2010), with the exception of those that exclusively benefit upper-income taxpayers, will be extended. (In contrast, assuming that all of the tax cuts — including the so-called “middle class” provisions — expire on schedule would slightly boost revenues to the trust funds and thereby stave off depletion until 2039, in CBO’s estimate.)

What the 2010 Trustees’ Report Shows about Social Security