The Office of Management and Budget today released a report estimating that revenues for the current fiscal year will be higher, and the deficit lower, than the administration and the Congressional Budget Office projected five months ago.  OMB now estimates that the deficit for fiscal year 2007 will be $205 billion, down from the $244 billion estimate in the President’s budget in February.  The administration and its supporters are portraying the new estimates as important evidence the President’s tax and budget policies are “working” by boosting the economy, generating more revenue, and improving the budget outlook.

Unfortunately, the reality is different.  Careful analysis of the Mid-Session Review data and other data about the budget and the economy shows that:

The Facts About the Mid-Session Review and the Budget

The Mid-Session Review projects a deficit for the current year (fiscal year 2007) of $205 billion.  This is $39 billion less than was estimated in the budget President Bush submitted to Congress on February 5.[2]

OMB now projects that spending will be $6 billion lower this year than it projected in February, which contributes to the lowering of the deficit estimate.  But the main reason for the decline in the projected deficit is the increase in projected revenues, relative to OMB’s February estimate.  At that time, the President’s budget estimated that revenues in the current year would total $2,540 billion.  The Mid-Session Review estimates revenues will total $2,574 billion, an increase of $34 billion.

The administration is portraying this increase in revenues as a surprise that provides new evidence the 2001 and 2003 tax cuts are boosting economic growth and revenues.  The facts do not support the administration’s position, however, as is explained below.

A Mid-Session Improvement in Budget Estimates Is Not a Surprise

This marks the fourth straight year that OMB has substantially reduced its estimate of the deficit for the current year in its Mid-Session Review.  It is easy to understand how an administration likes to be able to report during the course of a year that the budget outlook is improving; it is much easier to take credit for an “improving” outlook than to explain why things are not turning out as well as predicted.

CBO also has reduced its estimate of the current-year deficit during the last few years.[3]  Given the complexity of the nearly $2.8 trillion federal budget and the thousands of factors that affect the levels of expenditures and revenues in any given year, it is not surprising that the estimated deficit for the current fiscal year can change by billions of dollars as the year progresses.

It is important to recognize that this is not a phenomenon unique to the past few years.  Data published by CBO indicate that from fiscal year 1981 through 2006, the estimates that CBO made early in the calendar year of the surplus or deficit for the current fiscal year (generally an estimate made in January for the current fiscal year) were off by an average of 3.7 percent of actual revenues for that year.  (This excludes changes in the deficit caused by legislation enacted after the initial estimates were produced.)[4]  That is equivalent to being off by $89 billion in 2006.

There is nothing unusual in OMB or CBO changing its estimate of the deficit for the current year by the $39 billion reestimate contained in the Mid-Session Review (which is equal to 1.5 percent of projected revenues for 2007).  Nor should it be a surprise that the reestimate will show an improvement in the deficit for this year.  CBO’s analysis of its past errors in forecasting deficits and surpluses makes clear that there is a tendency to overestimate deficits (or underestimate surpluses) at this point in the business cycle, several years into an expansion.[5] 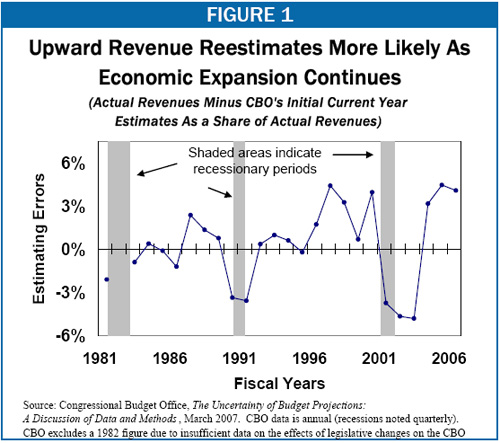 The same is true of revenues.  CBO’s data show that over the past quarter century, CBO has underestimated or overestimated current-year revenues by an average of 2.8 percent of actual revenues, which is equivalent to $68 billion in 2006.  Furthermore, there is a tendency to underestimate revenues as an economic recovery grows longer, as can be seen below in Figure 1.[6]  Thus, the $34 billion reestimate of revenues (1.3 percent of projected revenues for 2007) in the Mid-Session Review should be a surprise only to those who have not been paying attention to the recent or longer-term history of revenue estimating.

The administration and proponents of the President’s 2001 and 2003 tax cuts have sought to portray virtually every recent increase in revenues and the deficit outlook as evidence that “the tax cuts are working” — that is, that the tax cuts have spurred economic growth and boosted revenues well above what had been anticipated.  In their less careful statements, they seem to suggest the tax cuts are paying for themselves.[7]

In reality, economic and revenue data indicate that the tax cuts have not provided any special boost to the economy or revenues:

Virtually all budget analysts, including those in the administration, agree that current tax and spending policies are not sustainable in the long run — that the retirement of the baby-boom population and the growing per-person cost of providing health care in the United States will push up the cost of programs such as Social Security, Medicare, and Medicaid faster than revenues will grow, resulting in rapidly rising deficits and debt in the decades ahead.[14]

Although the Mid-Session Review estimates that the deficit for 2007 will be smaller than the administration projected earlier this year, the deficits projected for 2008 through 2012 are somewhat ($137 billion) higher than what was forecast in the President’s budget in February.  More importantly, the Mid-Session Review contains no information that would indicate any change in the conclusion that today’s budget policies are not sustainable.  The increase in revenues in 2007 in no way suggests that revenues are likely to grow enough in coming decades to cover the cost of providing promised benefits and services.  It remains the case that it will take major changes in tax and spending policies, as well as fundamental reforms in the nation’s health care system that allow Medicare and Medicaid costs to be constrained in a reasonable fashion, to bring future deficits under control.

Without the Tax Cuts the Budget Would Be in Surplus

The Mid-Session Review estimates there will be a federal budget deficit of $205 billion in 2007.  The administration is crowing that this is $39 billion lower than it estimated in February.  The administration ignores the fact that the budget would be in balance this year if it were not for the cost of the tax cuts enacted since 2001 (see Figure 3).

Based on Joint Committee on Taxation estimates, the total cost of the tax cuts enacted since January 2001 is $300 billion in 2007, taking into account the increased interest costs on the debt that have resulted from the deficit-financing of the tax cuts.  This means that even with the spending for the wars in Iraq and Afghanistan and the response to Hurricane Katrina, there would be a federal budget surplus of nearly $100 billion this year if the tax cuts had not been enacted, or if the costs of the tax cuts had been offset.  Finally, while supporters of the tax cuts claim that positive economic effects have lowered the tax cuts’ cost, the non-partisan Congressional Research Service concluded in a September, 2006 report that “at the current time, as the stimulus effects have faded and the effects of added debt service has grown, the 2001-2004 tax cuts are probably costing more than expected” (emphasis added).[15]

[3] In its June 6, 2007 Monthly Budget Review, CBO has indicated that the deficit estimate for 2007 in its upcoming August Budget and Economic Outlook: An Update will also be significantly lower than it had projected in January.

[5] This tendency is offset to a large degree over time by a tendency to underestimate deficits as an economic expansion draws to a close and in the early years of an economic recovery.

[6] Overestimates at other points in the business cycle tend to offset this tendency; the arithmetic mean of CBO’s revenue errors for the current fiscal year, measured over the period since 1981, is only 0.3 percent of actual revenues.   As an example, the initial underestimates of revenues in each of the last three years — 2004, 2005, and 2006 — followed three years of sizable overestimates of revenues in 2001, 2002, and 2003.  Federal revenues actually declined in nominal terms for three years in a row in 2001, 2002, and 2003, marking the first time this had occurred since the 1920s.

[7] Despite statements by the President and Vice President that seem to suggest the tax cuts actually increased revenues above what would have happened without the tax cuts, even the administration has concluded that the economic feedback from the tax cuts could in the long run boost revenues by no more than 10 percent of the “static” estimate of the cost of the tax cuts, assuming the tax cuts are fully offset by reductions in spending.  This is a very far cry from the tax cuts paying for themselves.  See Jason Furman, “Treasury Dynamic Scoring Analysis Refutes Claims by Supporters of the Tax Cuts,” Center on Budget and Policy Priorities, revised August 24, 2006.

[10] Proponents of the capital gains and dividend tax cuts enacted in 2003 argue that those cuts have provided the real economic impact and, therefore, that it is the performance of the economy since 2003 that matters.  Even since 2003, however, growth in GDP, wages and salaries, and employment have been below average for a post-World War II recovery.

[11] See, Aviva Aron Dine, “The Effects of the Capital Gains and Dividend Tax Cuts on the Economy and Revenues: Four Years Later, a Look at the Evidence,” Center on Budget and Policy Priorities, July 10, 2007.