The number of jobs grew by 96,000 in September. This is one-third the job growth of 300,000 per month that would have been achieved if job growth had occurred at the rate that is average for a recovery, according to the definition of average used by the chairman of the President’s Council of Economic Advisers. This continues a pattern predominant during the past year of job growth; with few exceptions, this growth has lagged behind — and usually well behind — the pace of job growth typically associated with a recovery period. 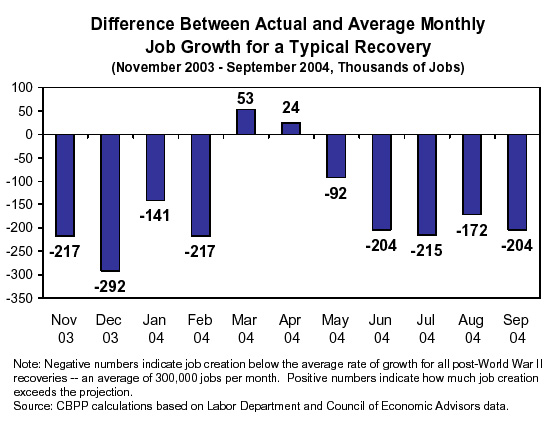 A Rise in Long-term Unemployment

[3] BLS made a preliminary estimate that “total nonfarm payroll employment will require an upward revision of approximately 236,000, or two-tenths of one percent, for the March 2004 reference month.” If this preliminary estimate is accurate, then monthly job growth averaged about 20,000 higher than reported over the 12-month period preceding March 2004. This would translate into job growth averaging 157,000 from November 2003 through September 2004, little different from the 148,000 figure used above. (Again, the 148,000 figure reflects the official data now available.)