House Budget Committee Chairman Paul Ryan’s budget plan includes cuts in SNAP (formerly known as the Food Stamp Program) of $133.5 billion — more than 17 percent — over the next ten years (2013-2022),[1] which would necessitate ending assistance for millions of low-income families, cutting benefits for millions of such households, or some combination of the two.  Chairman Ryan proposed a similarly deep SNAP cut last year.

While Chairman Ryan has outlined some key features of his proposal as it affects SNAP — in particular, converting SNAP to a block grant beginning in 2016 — he has provided little information on how the cuts would be achieved or their timing over the ten-year period.[2]  And the total cuts under the Ryan plan could turn out to be somewhat larger than $133.5 billion.[3]

Since more than 90 percent of SNAP expenditures are for food assistance benefits for low- income households, and most of the remaining funds go for necessary state administrative costs to determine program eligibility and operate the program properly, policymakers couldn’t possibly achieve cuts of this magnitude without substantially scaling back SNAP eligibility or reducing benefits deeply, with serious effects on low-income families and individuals.[4][5]  Table 1 provides state-by-state estimates of the potential impact in each state.

Of course, policymakers could shield some households from such deep cuts, but then other households would need to bear even larger cuts in order to produce the $133.5 billion in savings.

While Congress might not seek to hit the Ryan targets through eligibility cuts or benefit cuts alone, these examples illustrate the magnitude of the proposed funding reductions that would have to be made.  There would not be a lot of other places to go to achieve the required cuts; as noted, more than 90 percent of SNAP expenditures are for food assistance benefits for low-income households.

Chairman Ryan says that “this program cannot continue to grow at its current rates.”[9]  But the recent growth in SNAP expenditures is temporary and primarily a result of the depth of the recent recession, not a sign that the program is growing in a “relentless and unsustainable” [10] way.   Moreover, the program does not contribute to the nation’s long-term budget problem because it is projected to grow no faster than the economy over time.  As Figure 1 indicates, CBO’s latest projections show that once the economy fully recovers, SNAP is expected to return essentially to pre-recession levels as a share of the Gross Domestic Product. 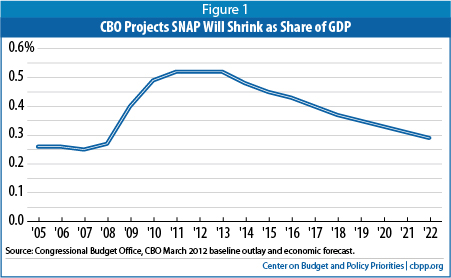 The most recent SNAP data on the number of participants (through December 2011) are consistent with continuing (though disappointingly weak) recovery, which also is reflected in the CBO forecast.  The rate of growth in the number of SNAP participants rose substantially during the recession and peaked in the fall of 2009.  But in recent months the rate of growth has slowed to a path that suggests the caseload may start to decline in the near future.  (See Figure 2.) 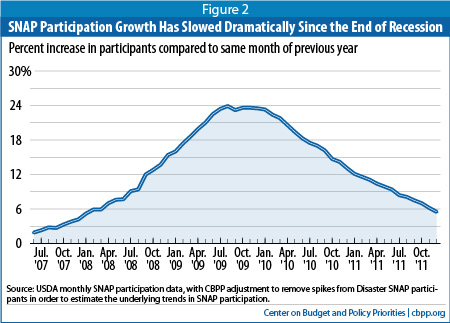 Chairman Ryan’s budget documents also criticize longstanding bipartisan efforts at both federal and state levels to increase SNAP participation among eligible low-income households.  The current and previous two Administrations and governors from across the political spectrum have sought to boost participation among low-income individuals who are eligible for SNAP but not participating.  These efforts have largely aimed at working-poor families and low-income elderly people, the two eligible groups with the lowest participation rates:  57 percent and 34 percent, respectively.  Chairman Ryan suggests that one benefit of capping SNAP funding would be to halt such efforts by inducing states to cease working to connect eligible low-income people to SNAP.

The Ryan budget documents assert that Congress could achieve the required savings by capping federal funding for SNAP and “freeing states to come up with innovative approaches to delivering aid to those who truly need it,” through a block grant.  That description leaves the mistaken impression that the program is not serving a population that is overwhelmingly poor and that savings could be achieved without causing significant harm to millions of vulnerable Americans.

Unlike most means-tested benefit programs, which are restricted to particular categories of low-income individuals, SNAP is broadly available to almost all households with very low incomes.  As a result, cutting SNAP would affect broad swaths of the low-income population.  Currently, 46.5 million people receive SNAP assistance to help them buy food for their families.  Census data show that in 2010 (the latest year for which these data are available), 46.2 million Americans lived below the poverty line, and 63 million lived below 130 percent of the poverty line, SNAP’s gross income limit.[11]

SNAP cuts of the magnitude that the Ryan budget proposes would almost certainly lead to increases in hunger and poverty.  Research conducted by USDA has found that 80 percent of SNAP benefits are redeemed in the first two weeks of the month and 97 percent of benefits are redeemed by the end of the month.  Emergency food providers report that more people ask for help in the latter half of the month, after their SNAP benefits have run out.  A cut of the magnitude that the Ryan budget calls for would mean that a typical household’s SNAP benefits would run out a number of days earlier, placing greater strain on household finances (and on emergency food providers) and significantly increasing the risk of hunger.

Deep SNAP cuts also would cause more families and individuals to fall into poverty and cause poor families to fall deeper into poverty.  Currently, the program helps lessen the extent and severity of poverty; Census Bureau data on disposable family income that include the value of food stamps and other non-cash benefits and taxes, as well as cash income, show that:

The Ryan SNAP cuts would thus have a sharp, adverse effect on millions of the lowest-income Americans.  Moreover, these cuts would not occur in isolation.  The Ryan budget contains steep cuts in other low-income assistance programs as well, compounding the effects of the SNAP cuts.  Many vulnerable families would lose health coverage, housing assistance, and other important supports such as child care at the same time they faced cuts in their SNAP benefits.

Cuts Could Be Even Larger if Economy Is Weaker Than Expected

As noted, Chairman Ryan’s budget calls for block-granting SNAP in 2016. Under a block grant structure, the program would lose its ability to respond automatically to the increased need that results from rising poverty and unemployment during economic downturns. Annual federal funding would remain fixed, regardless of whether the economy was in a recession or how severe a downturn was. As a result, the House Budget Committee staff’s estimate that the Ryan plan would cut SNAP by $133.5 billion over ten years may understate the magnitude of the cut — the cuts would be still more severe if the economy performs less well over the coming decade than CBO currently projects.

In addition, the Ryan budget would require the House Agriculture Committee to produce $33 billion in savings over the 2013-2022 period via reconciliation instructions. It is not clear whether these cuts would be in addition to the recommended $133.5 billion in SNAP cuts. The House Agriculture Committee could produce savings from any combination of mandatory programs under its jurisdiction, including farm, conservation and nutrition programs. As a result, the net impact of the Ryan budget on SNAP could be even larger than the recommended $133.5 billion in cuts.

[1] House Budget Committee staff provided this figure verbally in response to a question from Rep. Chris Van Hollen during the mark-up of the proposed budget resolution on March 21, 2012.

[2] House Budget Committee, The Path to Prosperity:  A Blueprint for American Renewal, March 20, 2012, page 39.  During the mark-up, House Budget Committee staff mentioned two policies in addition to the block grant: “expanded categorical eligibility” and “heat and eat.”  These would yield a very small share of the $133.5 billion in savings, as they would be in effect only for fiscal years 2013 through 2015.  By 2016, the block grant presumably would supersede these policies.

[4] More than 90 percent of SNAP expenditures are for food assistance benefits for low-income households.  The remainder goes to the federal share of state administrative costs for the program, block grants for nutrition assistance in Puerto Rico and American Samoa, employment and training and nutrition education services for SNAP households, funds for commodities for The Emergency Food Assistance Program (TEFAP), and funding for the Food Distribution Program on Indian Reservations (FDPIR).  For purposes of this analysis, we assume those other activities would bear a proportional share of the cuts.  As a result, we assume that SNAP benefits would need to be cut by $121.5 billion over the period.  This is a conservative estimate of the share that would come from benefits; in the past, Congress has favored these other activities and not looked to them for large budget cuts.  In addition, during the Budget Committee mark-up committee staff indicated that under a block grant, states could cut benefits in order to fund other activities, such as job training.  So the cut to SNAP benefits could be deeper than this analysis assumes.

[5] All estimates use CBO’s March 2012 baseline assumptions.  These estimates do not separately take into account the two policy proposals that House Budget Committee staff indicated were included in the $133.5 billion (see footnote 2).  Rather, they are intended to be illustrative of the size of the cuts that would be required.

[6] These estimates are relative to CBO’s participation projections.  This assumes the cut would go into effect in fiscal year 2013 (i.e., starting this October) and would be proportional to projected SNAP spending in each year (as estimated by CBO), and that the individuals who would be cut would otherwise have received the average benefit.  Under these assumptions, the reduction in the number of beneficiaries would be somewhat smaller than 8 million in later years, because CBO assumes that the number of people participating in SNAP will decline as the economy recovers more fully.

[7] See USDA’s estimates of the monthly cost of the Thrifty Food Plan at:  http://www.cnpp.usda.gov/usdafoodcost-home.htm.

[8] To estimate an across-the-board cut, we reduced the size of maximum benefits relative to the TFP by 12 percent each year.  Because benefits are temporarily set at higher levels (113.6 percent of the June 2009 TFP) as a stimulus measure, this would result in two benefit cuts, one in October 2012 and another in November 2013 when the benefit increase from the Recovery Act is scheduled to expire.  There are other alternatives for timing across-the-board cuts.

[11] Under federal rules, a household’s monthly income must be at or below 130 percent of the poverty line — or roughly $1,980 a month (about $23,800 a year) for a family of three in 2011 — to qualify.  There are some exceptions; for example, households with seniors and people with disabilities are not subject to the gross income test but must have net income (after deductions for certain necessary expenses) at or below 100 percent of the poverty line.  States have some flexibility to lift the gross income test for certain other households, while some categories of people are not eligible for SNAP regardless of how low their income and assets may be — such as strikers, certain legal immigrants, and all undocumented immigrants.  Unemployed childless adults may receive SNAP benefits for only three months out of every three years, except in areas with high unemployment.