The Deficit Reduction Act signed by the President in February contains a new mandate requiring the 50 million U.S. citizens who receive Medicaid coverage, as well as all future citizen applicants for Medicaid, to prove their citizenship by providing documents such as birth certificates or U.S. passports. In January, the Center on Budget and Policy Priorities released an analysis of a nationally representative survey, conducted by Opinion Research Corporation, that found that 3.2 to 4.6 million U.S.-born low-income citizens on Medicaid would face serious problems because they did not have a birth certificate or passport readily available.[1]

Interim final regulations issued by the Centers for Medicare and Medicaid Services (CMS) on July 12 make two significant improvements in the new documentation requirement.[2] First, elderly and disabled citizens who are enrolled in both Medicare and Medicaid or are enrolled in Medicaid because they receive Supplemental Security Income (SSI) benefits will not be subject to the new requirement. Second, the regulation clarified that states may use computerized matches of state vital records databases to check whether beneficiaries or applicants were born in the United States and therefore are native-born citizens; the earlier guidance appeared to discourage such matching. These improvements, however, do not resolve all the difficulties created by the new requirement.

This paper reexamines our prior estimates in light of the CMS regulations. It finds that: 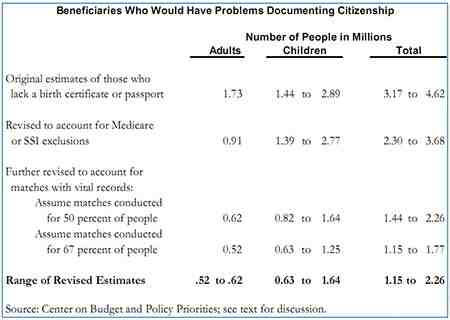 Up to 1.6 Million Citizen Children and 600,000 Citizen Adults Could Be Affected

The policy changes announced by CMS reduce but do not eliminate the problems that the new requirement will create for Medicaid beneficiaries and applicants. Between 1.2 and 2.3 million U.S.-born citizens, including about 600,000 to 1.6 million children and 500,000 to 600,000 adults, may have serious problems getting or retaining their Medicaid coverage because they lack a birth certificate or passport and their citizenship cannot be ascertained through a cross-match with vital records data (or is not so ascertained because their state is not conducting cross-matching). Many may eventually secure their documents but may experience serious delays in receiving Medicaid coverage because of the additional time, effort, and expense imposed; the regulations do not permit states to provide applicants with Medicaid coverage for needed health care services while they attempt to obtain the needed documents.

Those most likely to encounter problems under the revised policies are low-income children and parents who are citizens and otherwise eligible for Medicaid, but who lack a birth certificate or passport. For example, a U.S.-born pregnant woman and her child who become homeless due to flooding and are currently residing in a different state than their state of birth may be unable to get Medicaid coverage because they lost their documents, or they could face substantial delays in getting coverage as they struggle to obtain citizenship and identity documents. A U.S.-born child placed in foster care due to child abuse may be barred from Medicaid coverage because the child welfare agency cannot locate her birth certificate.[3]

In addition, while most disabled Medicaid beneficiaries will be exempt from the new requirement because they are on SSI or Medicare, an estimated 750,000 people with disabilities are not exempt and will be required to provide documentation. This group includes non-elderly citizens with serious physical or mental disabilities whose incomes are just above the SSI income limit, persons in home- and community-based care, and some persons in nursing homes or other facilities.[4]

The above estimates are conservative. They do not include additional complications that may arise because some individuals lack additional documents required to prove their identity, such as driver’s licenses or state-issued identification cards. Under the new requirement, individuals who cannot provide a passport (or a few other documents) must provide proof of their personal identity as well as their citizenship. Thus, an individual providing a birth certificate must also provide proof of identity.

These estimates are based on adjustments of the estimates reported in our January paper. Briefly, that paper used data from a nationally representative survey of 2,026 adults that asked persons who were born in the United States whether they or their children had a U.S. passport or birth certificate at home. The percentages of low-income people without these documents were applied to Census data on the citizenship status of Medicaid beneficiaries and national Medicaid enrollment data. The original estimates (and the adjustments made here) are summarized in a table on page 2.

For this revised analysis, we began by estimating the number of U.S.-born citizens on Medicaid who would be excluded from the new citizenship documentation requirement because they are enrolled in Medicare or SSI. The SSI exclusion does not apply in 11 states that use their own eligibility criteria in lieu of federal criteria (the so-called “209(b) states”). But the CMS regulations published on July 12 clarify that states may check citizenship for these individuals using the Social Security Administration’s automated SDX (State Data Exchange) database. We assume that all elderly citizens and disabled citizen beneficiaries on SSI would effectively be excluded from the new requirement because of these modifications.[5] Accordingly, we excluded elderly and most disabled beneficiaries from the base of those required to submit documentation, based on 2003 Medicaid Statistical Information System (MSIS) data, and we used data from the January survey to estimate the number of remaining individuals who lack a birth certificate or passport. This reduced the number of adults without documents by about 820,000 and the number of children without documents by about 50,000 to 100,000.

Next, we assessed the potential impact of checking citizenship status through cross-matches with automated state vital records databases. Citizenship can be determined through a cross-match only for individuals who were born in that state, since states lack the ability to conduct automated vital records matches for out-of-state births. We analyzed data from the Census Bureau’s American Community Survey for 2004 to see what percentage of low-income (below 150 percent of the poverty line), native-born, non-elderly, non-disabled adults and children lived in the state in which they were born.[6] At the national level, 86 percent of low-income U.S.-born children and 67 percent of low-income native-born adults live in the state where they were born. The percentage of state-born adults and children varies considerably from state to state.

Since data matching sometimes fails due to technical problems (e.g., transposed numbers or letters, typos, etc.), we assumed that matches would succeed 95 percent of the time. That is, in practice it might be possible to determine citizenship for 82 percent of U.S.-born children and 64 percent of U.S.-born adults. The effectiveness of matching could be lower, depending on how aggressively a state uses this approach, whether it conducts matches for those renewing their Medicaid coverage as well as new applicants, how easy it is to conduct data matches, what types of matching algorithms are used, and other factors.

The biggest obstacle to the use of vital records data may be whether states are willing or able to conduct data matches. In some cases, a state may be unable to conduct matches because of gaps in its Medicaid or vital records data system. In other cases, a state may have administrative barriers or policy objections to the use of data matches. Based on very preliminary information about a number of states’ implementation plans, we estimated that half to two-thirds of Medicaid beneficiaries will be subject to vital records matches; this is likely a generous estimate.

[3] Pat Redmond, “Children in Foster Care May Have to Delay Health Care Because of Federal Regulations on Citizenship Requirement,” Center on Budget and Policy Priorities, July 7, 2006.

[4] In general, those under 65 are not eligible for Medicare. For example, non-elderly people with disabilities who get Social Security Disability Insurance only become eligible for Medicare after a two-year waiting period and typically get their health insurance through Medicaid.

[5] Some disabled Medicaid beneficiaries are not excluded because they are not on Medicare or SSI. Using Medicaid Statistical Information System data for 2003, we estimate that about 750,000 disabled Medicaid beneficiaries do not receive either Medicare or SSI and would still need to present documentation of citizenship. This includes individuals in medically needy, poverty-related, and other Medicaid eligibility categories.

[6] We appreciate the contribution of Arloc Sherman of CBPP, who tabulated these data.