Kansas is seriously considering a new, unprecedented state income tax break — at a huge cost to the state budget — that would benefit large corporations and passive investors, and reward tax avoidance, while failing to meet its stated objective of job creation.  The tax break was first proposed by Governor Brownback earlier this year, and since has been incorporated — in slightly different forms — into bills passed by the state House and Senate.

The new tax break would benefit large corporations and investment vehicles more than the small business job creators the governor and legislative advocates claim they are trying to help.  At the same time, the proposals would cost the state, at a minimum, $245 million or more in annual tax revenue that the state otherwise could be using to strengthen its economy.  (The primary difference among the proposals is that under the House bill, the full revenue impact would not occur until 2018, while it would hit all at once under the Brownback and Senate plans.)

Whenever it takes effect, this provision would:

A New Tax Giveaway for Companies, Including Many That Are Very Large

Contrary to claims that this proposal would target small businesses, it would actually give a major new tax break to many large companies organized as partnerships, Subchapter S corporations, and limited liability companies (LLCs).  These types of businesses are known, collectively, as “pass-through entities” because their income is exempt from taxation at the business level and instead passed-through for tax purposes to individual owners.[1]  Pass-through entities’ profits therefore are normally taxed on personal income tax returns.  The pending legislation would eliminate this taxation, along with ending the taxation of profits earned by individual or “sole” proprietorships.

Pass-through entities are relatively easy to establish, and many small businesses organize themselves that way.  But a lot of large businesses do, too.  Tax experts have cautioned that — in the words of one former Bush Administration economic advisor and Congressional Budget Office acting director who now heads the nonpartisan Tax Policy Center — “lawmakers should take care not to assume that all pass-throughs are small businesses.” [2]

The data show that:

As the data above show, this claim that this plan is targeted at small businesses is exaggerated and misleading.

In separate legislation, each house of the Kansas legislature has passed a full tax exemption for pass-through entities. The Senate version would exempt all of the state’s nearly 200,000 pass-through entities from income taxation at once, beginning January 1, 2013. The House’s bill would phase in this unprecedented tax break over five years. In tax years 2013 to 2015, each taxpayer could exempt up to $100,000 in non-wage business income. The exemption cap would rise to $250,000 in 2016 and 2017.  By 2018, all pass-through profits in Kansas would go untaxed.

To boost the economy, a tax subsidy must target businesses that are likely to create jobs.  The pending legislation fails this test in several ways. 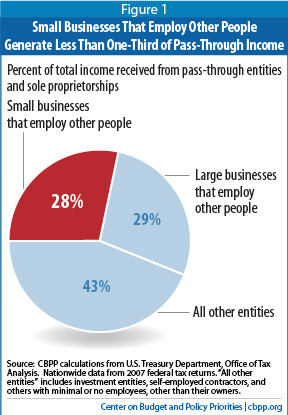 For one thing, a large share of pass-through entities and sole proprietorships either aren’t businesses in any economically meaningful sense or don’t have significant job-creation potential.  For example, in many cases a sole proprietorship is used to establish an individual as a self-employed contractor to a single firm, little different from an employee and with no intention to hire anyone else.  Many pass-throughs are used purely as investment vehicles, again, with no employees.  A study by the nonpartisan research staff of the U.S. Department of Treasury found that 88 percent of the owners of pass-through entities and sole proprietorships own businesses that spend less than $10,000 on payroll or contract labor. [4]

In fact, small-business employers would get only a small slice of the benefit from this tax break.  The Treasury study found that only 28 percent of all pass-through income is generated by small businesses that spend at least $10,000 on labor — the small-business employers that the governor claims to be targeting for assistance.  Another 29 percent is generated by large businesses with employees.  The largest share of pass-through income, 43 percent, is generated by entities that aren’t true businesses and/or don’t have employees (other than the owners).  (See Figure 1.)

Yet, all of this income would be exempt under the Kansas legislative proposals, without any requirement that beneficiaries create — or even maintain — a single job.

Moreover, while small businesses are sometimes described as the engine of the economy, that doesn’t mean all small businesses create jobs.  In fact, many don’t.  As the Federal Reserve Bank of Kansas City notes:

The attribution of the bulk of net job creation to small businesses arises largely from relatively large job losses at large firms, not to especially robust job creation by small firms. More importantly, data show that, on average, large businesses offer better jobs than small businesses, in terms of both compensation and stability. Further, there is little convincing evidence to suggest that small businesses have an edge over larger businesses in innovation.[5]

New research shows that small businesses are mainly skilled craftspeople, lawyers, doctors, real estate agents, shopkeepers, and restaurateurs. These businesses provide relatively standardized goods and services for existing customer bases. They are responsible for little innovation. Once they are established, they do not grow. Moreover, they do not want to grow. One major reason for this is that many small business owners are motivated by non-pecuniary benefits such as wanting a flexible schedule or to be their own boss.[6]

There is an exception: Some young small companies are responsible for a lot of innovation and job creation, although these are often economically risky and short-lived jobs.  As a recent study by economists at the University of Maryland and the U.S. Census Bureau points out, “Policies that favor various simply defined classes of businesses (e.g., by size) and ignore this fundamental dynamic [i.e., the distinction between young, fast-growing firms and more mature small businesses] will likely have limited success.”[7]  This point is particularly applicable to the proposed new tax break.  By definition, all businesses start as small businesses; in the process of becoming large businesses, they add jobs.  But the proposed tax break is poorly targeted to those young, fast-growing small businesses, for the following simple reason.  In those early stages of growth, fast-growing firms tend to make relatively little profit because they are plowing their receipts back into additional plant and equipment, R&D, marketing and hiring more workers.  Because the businesses earn little or no profit, the owners would get little or no benefit from the proposed tax break.  In other words, mature small businesses that aren’t creating jobs will get the tax break; younger small businesses that are creating jobs won’t benefit.

Finally, it is worth noting that the exemption would eliminate Kansas taxes on many owners of Kansas pass-through entities who don’t reside in Kansas.  Kansas will lose the revenue, but these owners will not even have a hypothetical incentive to create jobs in the state because the profit will still be taxed by their home states in most cases.[8]

While Governor Brownback and legislative leaders are touting the proposal as a way to energize business and create jobs, it could have the opposite effect.  The lost revenue from the exemption would make it harder for Kansas to maintain its schools, roads, and other resources necessary for economic growth.  Internal Revenue Service data show that profits from pass-through entities and sole proprietorships (minus losses) represent about 8 percent of the Kansas personal income tax base.  This suggests that the exemption could cost the state 8 percent of its income tax receipts — $245 million in fiscal year 2013.  To place this potential revenue loss in context, $245 million comes close to the governor’s proposed spending on corrections ($269 million), and is equal to his proposed budget for the University of Kansas and the University Kansas Medical Center combined ($247 million).

The actual revenue loss would likely be even greater, in part because the tax change would create incentives for taxpayers to reclassify other income as pass-through income.

The plan to exempt pass-through income from taxes is part of a broader effort to make Kansas’ tax code, in the Governor’s words, more “level.” But, as with the claim that the proposal targets small businesses, the rhetoric doesn’t match the reality.

This approach is not only inequitable but also could create some incentives and opportunities for tax avoidance.  It could prompt some taxable C corporations with relatively few owners to reorganize as pass-through entities even if they had no intention to create additional jobs.  It would also tempt taxpayers to reclassify their income or change how they use it.  For instance, a business owner might choose to pay himself less salary and give himself more “profits.”

These are just a few examples of possible avoidance strategies that the new tax break will enable.  Since no state has ever offered this provision, it is hard to know what other avoidance strategies may be possible, but there is little reason to doubt that tax lawyers and accountants will seek to exploit it — that is, to use it to identify additional opportunities to avoid paying taxes on income, particularly investment income, that they would otherwise owe.  Of course, only those taxpayers who can afford high-priced lawyers and accountants will benefit from this.

In the end, there is little economic rationale for changing the tax treatment of pass-through income.  These businesses already have enormous tax advantages due to their immunity from corporate income taxes, even in cases in which they actually are corporations (S corporations) or enjoy virtually all the benefits of corporations (LLCs).  The major beneficiaries of such a giveaway are unlikely to be the small businesses and job creators that Governor Brownback or legislative leadership say they are intent on helping.  Instead, the benefits would flow in great measure to large, established businesses, some of which don’t even have employees.  The state would lose a considerable amount of money that could be used to invest in proven and reliable ways to bolster Kansas’ economy: improving schools and colleges and supporting families to ensure a skilled, competent workforce, creating a more reliable transportation system, and strengthening other public assets that make the state an attractive place to work and live.

[1] Corporations that are taxable at the corporate level are called “C corporations.”

[8] The reason is this:  Under current law, non-resident owners of Kansas businesses get a credit against their home state taxes for the Kansas taxes they pay on their pass-through income.  No longer paying Kansas taxes on that income would mean they would no longer get the credit and would pay home-state taxes on the full amount.