In One-Fourth of Middle-Income, Privately Insured Families, Someone Loses Coverage Within Four Years

In about one-quarter of middle-income families with private health coverage, a family member lost coverage at some point between 2004 and 2007, analysis of Census Bureau survey data reveals. Nearly all of these family members ended up uninsured, often for several months. While the survey only extends through 2007, these problems have almost certainly worsened due to the recession. Enactment of comprehensive health reform that provides affordable, meaningful insurance options, particularly for those losing access to employer-based coverage, would help protect many such families in the future from the financial and health consequences of being uninsured.

Analysis of data from the Census Bureau’s 2004-2007 Survey of Income and Program Participation (SIPP) shows: [1]

This analysis is the first to examine patterns of insurance loss for families, rather than individuals. Earlier studies confirm, however, that a large share of individuals lack insurance over time.[3] Other data sources also show patterns of lost coverage for 2006-2007 that are similar to those in the SIPP data.[4] 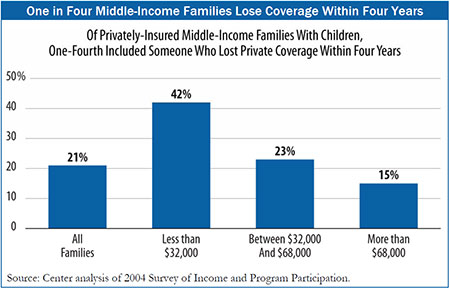 Private Coverage Likely Even More Precarious Now Due to Recession

Most working-age Americans who have health insurance rely on private insurance — the vast majority through their employers — to cover themselves and their families. This coverage is becoming increasingly unreliable, however. Since 2001, the proportion of firms that offer coverage to their employees has declined from 68 percent to 60 percent, and average annual premiums for employer-based insurance have more than doubled over the last decade.[5]

Moreover, the 2004-2007 SIPP data likely paint a rosier picture than what is actually happening today. The number of families losing private coverage and becoming uninsured has almost certainly increased as the economy and unemployment have worsened.[6] Since the recession started, the unemployment rate has nearly doubled (from 5.0 percent in December 2007 to 9.7 percent in February 2010), and more than 8 million jobs have been lost.[7] Urban Institute researchers estimate that with every percentage-point increase in the national unemployment rate, 1.1 million people become uninsured (and another 1 million people enroll in Medicaid or the Children’s Health Insurance Program).[8]

Gaps in insurance coverage can have serious impacts on families’ health. Studies have shown that people who are uninsured for even short periods of time often forgo needed care.[9] This can result in poor health outcomes, such as by delaying a diagnosis until the disease is more serious and requires more drastic treatments.[10]

The finding that many families with private coverage are unable to count on it over time underscores the need for comprehensive health reform. In addition to covering more than 30 million uninsured Americans, the health reform legislation that Congress is now considering would help families that lose private coverage in the future by providing new coverage options through a new insurance exchange, instituting substantial health insurance market reforms, and furnishing many families with help affording coverage.[11]

[1] Center on Budget and Policy Priorities analysis of the 2004-2007 Survey of Income and Program Participation (SIPP). In this analysis, family members who switch directly from private insurance to Medicare, typically at age 65, are counted as if they were privately insured.

[2] The figures in this analysis may be conservative due to data limitations. On the advice of Census Bureau staff, we excluded loss of insurance coverage in the first 24 months of the survey for children younger than 15 years due to data problems in the 2004-2007 SIPP Panel, which reduced our estimates of lost coverage. Without this exclusion, the share of middle-income, privately insured families losing coverage would likely increase from about one-fourth to about one-third. In addition, data from the earlier 2001-2003 SIPP panel, which according to Census staff are not affected by these problems, show that more than one in three middle-income, privately insured families lost private coverage during the three-year study.

[3] One study using data from the 2006-2007 Medical Expenditure Panel Survey (MEPS) found that 32 percent of the non-elderly population was uninsured at some point during the two-year period. Jeffrey Rhoades and Steven Cohen, “The Long-term Uninsured in America, 2003-2006: Estimates for the U.S. Civilian Non-Institutionalized Population Under Age 65,” Agency for Healthcare Research and Quality, August 2008. SIPP data produce similar results.

[4] A Center analysis of the 2006-2007 MEPS found that 19 percent of middle-income, privately insured families lost coverage over those two years. MEPS data are not available for the full four years covered by SIPP, but an analysis of just the 2006-2007 SIPP data yields a comparable figure of 18 percent.

[6] The 2004-2007 SIPP figures are likely to be conservative because of some data limitations. Our analysis does not count the loss of private insurance among children age 0-14 during the first two years of the survey, because of a possible problem identified by Census Bureau staff in the processing of the survey data for young children during those months.