In light of the still tenuous nature of the economic recovery, President Obama’s budget request of $266 billion for temporary provisions to support and speed economic recovery is necessary, reasonably sized, and well targeted.[1] Some news outlets, focusing on the budget’s $100 billion for a new “jobs initiative,” have reported that the budget proposes only $100 billion for temporary, economy-boosting measures. But, in addition to the funds for the new jobs initiative, the budget includes $166 billion in temporary extensions of some provisions of the American Recovery and Reinvestment Act (ARRA), which are contributing to economic recovery but will soon expire. (See Table 1.)

The size of the President’s request — $266 billion — is consistent with recent estimates by a number of economists of the magnitude of a needed recovery package. For example, economist Mark Zandi of Moody’s Economy.com recently called for additional measures of about $250 billion. [2] The temporary tax cuts and expenditure increases included in the budget appear well designed to help ensure that the economy averts a double-dip recession and attains (and sustains) a reasonable rate of economic and job growth.

Among the expiring provisions that the President proposes to extend is one that temporarily increases the federal share of state Medicaid costs to help states meet the increased need for Medicaid as people lose their jobs and health care coverage. To make the recovery package as effective as possible, Congress also should devote part of the funding for the jobs initiative to helping states avert layoffs in education and other public services.

The President’s budget does not detail the specific provisions that its new jobs initiative should include. As Congress crafts a package to sustain and create jobs, it should consider using part of the funding to extend ARRA’s State Fiscal Stabilization Fund, which is helping states maintain education and other services such as public safety and law enforcement during the recession.

The stabilization fund has a proven track record of protecting and creating jobs. The Department of Education found that it had enabled states to save or create 318,000 jobs through September 30 — 255,000 jobs in education and 63,000 jobs in other areas. [3]

Dedicating some of the jobs-initiative funding to the stabilization fund would produce high “bang-for-the-buck” results. If Congress provides no additional federal support, states’ efforts to balance their budgets could reduce Gross Domestic Product by 0.9 percent in state fiscal year 2011, costing some 900,000 jobs.[4]

Economic forecasters and the non-partisan Congressional Budget Office have credited ARRA for ending the recession sooner than it otherwise would have, keeping unemployment from rising even higher than it has, and helping cushion the impact of the downturn for those hardest hit. [5] Continuing these effective policies, many of which are scheduled to expire in coming months or by the end of 2010, would boost the economy at a time when analysts agree it will continue to need significant help.

[3] Total education funding through ARRA, including both fiscal relief and programmatic funding, is estimated to have created or saved 326,593 education jobs. US Department of Education, “American Recovery and Reinvestment Act Report: Summary of Programs and State-by-State Data,” November 2, 2009. 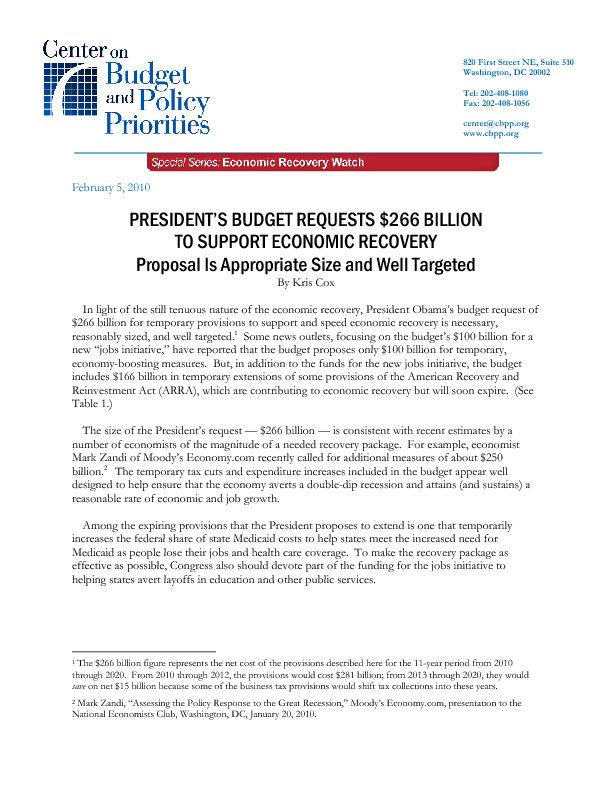