In the escalating battle over the domestic appropriations bills for fiscal year 2008, the President and senior Administration officials have charged that congressional Democrats plan an irresponsible increase of $205 billion over the next five years in discretionary spending (i.e., spending on programs funded through the appropriations process).  Yet this claim — which the President repeated in his press conference today — is false.  It is based on misuse of budget numbers, including the use of a large gimmick that distorts the numbers in the President’s budget.  The facts are as follows: 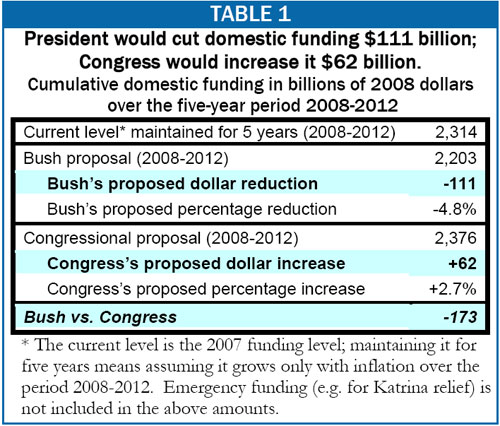 The Rhetoric and the Reality

In fact, the only large increases on the table are those the President himself has put forward for defense and international programs.  The President has proposed increasing the Pentagon other military programs and international programs by $42 billion in 2008 (after adjusting for inflation) and by $252 billion over five years.  These increases — which amount to nearly 10 percent by 2012 (9.4 percent to be precise) — are in addition to the large sums being devoted specifically to activities in Iraq and Afghanistan.  There has been little public debate about whether ongoing defense programs that are unrelated to activities in Iraq and Afghanistan require such rapid increases.  The Congressional budget plan accepts all of those military increases and most of the international increases.[1]

In the domestic arena, what the President seeks are $12 billion in cuts in for 2008 and $111 billion in cuts over five years, relative to 2007 levels adjusted only for inflation, although White House rhetoric consistently masks this fact.[2]  In 2006, the President sought similar cuts in domestic appropriations programs and could not get them through a Republican Congress.  Now, when a Democratic Congress is similarly resisting such cuts, Congress’ actions are labeled by the White House as irresponsible and unacceptable.

But once we adjust for inflation, we see that the domestic discretionary increases planned by Congress are modest; funding would be a total of 1.9 percent higher in 2012 than in 2007.[3]  By contrast, during his first five years in office, the President signed into law domestic discretionary funding increases that reached 11 percent — with no vetoes and no attacks on those increases as being irresponsible.

Appendix: The Data Used in This Analysis

Sources:  Figures for 2001 through 2006 are derived from discretionary budget authority in OMB’s public database as of February 2008, including OMB’s classifications of amounts as discretionary and its disaggregation of those amounts by budget function (i.e., between national defense, international affairs, and the other functions, which we call domestic).  Figures for 2007 are derived from CBO data issued in August 2007.  Figures for 2008 through 2012 in the congressional budget plan are derived from figures in tables contained in the conference report on the congressional budget plan.   Figures for the President’s budget for 2008 are derived from CBO’s reestimate of the President’s budget, issued in March 2007.  Finally, figures for the President’s budget for 2009-2012 start with those contained in backup tables prepared by OMB and shared with Congress in February 2007.  We adjust these raw data in three ways, as explained below: by removing supplemental and emergency funding, by adjusting for scorekeeping anomalies, and by adjusting outyear data for inflation (and, in some parts of the analysis, for inflation and population growth).

1. Removal of supplemental and emergency funding

3. Adjustments for inflation and population growth

We adjust figures for years other than 2008 to account for the fact that prices rise over time.  In the parts of the analysis that cite figures reflecting an adjustment for population growth, we also adjust the figures (for years other than 2008) to reflect the fact that the U.S. population grows over time.  For example, the combination of higher prices and a larger population means that the real, per-person value of a dollar of federal benefits will be worth an estimated 12.9 percent less in 2012 than in 2008.

Table 5 shows the effects of the adjustments discussed in this appendix, and Table 6 shows the figures for each year and over five years as adjusted for scorekeeping anomalies.

[1] Although the congressional budget plan agreed to in the spring of 2007 — which is the basis for our analysis — accepts all of the defense increases in the President’s budget, the Appropriations Committees have decided to move a few billion of Pentagon funding for 2008 to the Department of Veterans Affairs, which in terms of this analysis would shift those amounts from “defense” to “domestic” funding.

[2] In an earlier analysis, The Fight over Appropriations: Myths and Realities, we showed that President Bush called for $16 billion in funding cuts for 2008 (relative to 2007 levels adjusted for inflation) in eight domestic appropriations bills.  The $12 billion in cuts in domestic appropriations that this analysis cites, and the $16 billion in cuts cited in the prior analysis, differ because this analysis is based on the domestic budget “functions” while the prior analysis was based on eight domestic appropriations bills.  The difference between these two numbers primarily involves veterans programs and homeland security programs.  In the earlier analysis, we classified the Military Construction – Veterans Administration bill and the Homeland Security bill as security and international programs rather than domestic programs.  However, the veterans portion of the first bill and essentially all of the second bill are part of budget functions that are considered domestic.  Consequently, we classify the $1.9 billion in increases the president proposes for veterans programs and the $1.5 billion in increases he proposes for homeland security programs as domestic for purposes of this analysis.  Treating these programs as domestic reduces the net domestic reductions planned by the president from $16 billion to $13 billion, and other minor adjustments further reduce the figure to $12 billion.

[4] A more complete explanation of the reason for the second, third, and fourth adjustments is included in the appendix to Kogan, The Omnibus Appropriations Act: Are Appropriations For Domestic Programs Exploding?, Center on Budget and Policy Priorities, revised February 1, 2004, at https://www.cbpp.org/12-16-03bud.htm.