President Bush’s budget includes $156 billion in tax cuts over the next ten years (2007-16) to promote Health Savings Accounts and associated high-deductible insurance policies, with the large majority of this money going to more affluent households.  This is slightly larger than the $133 billion in tax cuts for health care that the President proposed in last year’s budget.[1]  But this modest increase masks a more fundamental change in the President’s priorities.

The President has dramatically scaled back last year’s proposal to provide refundable tax credits to low- and moderate-income families to purchase health insurance in the individual market.  While that proposal was flawed and would not have done much to reduce the number of uninsured, cutting the proposed resources that would be directed toward low- and moderate-income families signals a disturbing shift in the Administration’s health care priorities.  The Administration has reduced the cost of the health tax credit targeted on low- and moderate-income families from $77 billion over five years in last year’s budget to $24 billion over five years in its new budget.  At the same time, the Administration is now proposing $132 billion in HSA-related health tax breaks that would go disproportionately to affluent households, as compared to $31 billion in such tax breaks in last year’s budget. 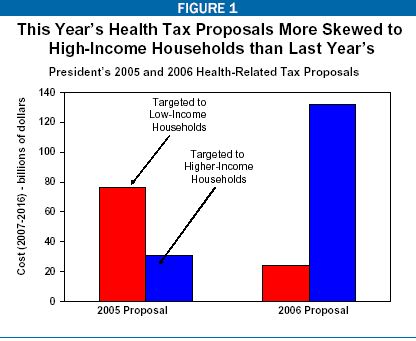 The reduction in cost appears to reflect, at least in part, a large reduction in the number of low- and moderate-income households expected to use the credit, as a result of the requirement that the credit be used only for high-deductible insurance plans, which often are less desirable.  In addition, the President has once again declined to update the size of his proposed low-income tax credit to reflect the rising cost of health insurance.  The President first proposed a low-income health tax credit of up to $1,000 for an individual and $3,000 for a family back in February 2002, when he also proposed that these amounts be indexed to medical inflation each year thereafter.[6]  His latest budget proposes the same $1,000 and $3,000 credits even though the costs of health insurance have risen sharply over the last half-decade.  For example, health insurance premiums for employer-based coverage rose 56 percent between 2001 and 2005.[7]  (In addition to being too small to address the problem, the President’s low-income tax credit also could encourage some small employers to cease offering coverage, could fragment risk pools in employer-sponsored insurance, and would do nothing to help those low- and moderate-income people who are in poorer health to obtain coverage in the individual insurance market.[8])

The President’s tax-cut proposals promoting HSAs suffer from significant problems, including their high cost, regressivity, and the adverse impact they would have on employer-based health coverage.[9]  But even in comparison to previous Administration budgets, the health tax proposals in this year’s budget represent a major shift of resources away from low- and moderate-income families and toward the same people who have benefited most handsomely from the other tax cuts enacted since 2001.

[1] All numbers for last year’s budget are adjusted to be comparable to the 2007-16 budget window and the assumption that the proposals are enacted in 2006.  Last year’s budget reported that its health tax cuts would cost $125 billion from 2006-15.

[2] This breakout does not include a $23 billion proposal that the President included in last year’s budget, but not in this year’s budget, to provide tax credits to small businesses that contribute to HSAs.  That proposal appears to have been neither disproportionately geared to high-income families nor targeted to low- and moderate-income families.

[5] Another measure of the benefits of the tax proposals to low- and moderate-income households is the portion of those proposals that would be provided in the form of refundable credits for people with incomes too low to owe income tax.  The total amount of tax credits that would be provided in the form of a refund fell from $73 billion in the Administration’s budget of a year ago to $20 billion in this year’s budget.  These totals include the refunded portion of all tax credits that the Administration is proposing, including the HSA tax credits.  (These figures exclude the portion of the low- and moderate-income tax credits that would not take the form of a refunded credit but instead would reduce regular income taxes.)