The Trump Administration is publicly weighing plans to gradually lower the official poverty line by applying a smaller cost-of-living adjustment each year.[2] Doing so would be unjustified for several reasons:

The Administration appears to believe that the CPI-U, which the Census Bureau now uses to update the federal poverty line each year, is not as accurate a measure of inflation as alternative (and slower-rising) indices such as the “chained CPI.” Using the chained CPI instead of the CPI-U to adjust the poverty threshold would slow its growth by about 0.2 percentage points a year. Many analysts may agree that the chained CPI is a more accurate gauge of price changes across the whole economy. But it is not at all clear that it would be more accurate for low-income households.

There are two reasons why a slower-rising index may understate price increases for the poor. First, prices have been rising faster than the CPI-U for the broad categories of goods and services that dominate poorer households’ spending and constitute a larger share of low-income households’ budgets than of the average household’s budget.

Although not definitive, these two types of studies — those comparing inflation rates across different types of goods and those comparing inflation rates for similar types of goods across different income groups — suggest that low-income households experience higher inflation than average or high-income households.[12] If so, indexing the poverty threshold by an inflation measure that grows less rapidly, such as the chained CPI, could make the poverty threshold less accurate, not more so. At the very least, more data collection and research are needed before any change is made.

Adopting an inflation index that may be less accurate for low-income households would be especially unwise given that evidence suggests, and many experts and the public tend to agree, that the poverty line is already too low.

The difficulty of making ends meet on income near the poverty line becomes clear when one adds up the cost of basic needs. Various experts have estimated minimum living costs (leaving no room for eating out, retirement saving, entertainment, or other “discretionary” items such as children’s school trips or birthday parties), and the results consistently exceed the poverty line by a wide margin. For example:

Moreover, public opinion surveys indicate that most Americans would set the poverty threshold higher than the official poverty line.

An even higher poverty line would result if the methods used to create the official poverty measure in the 1960s were repeated today. As the 1995 NAS expert panel on the poverty measure noted, “If the original approach were used to develop the poverty thresholds today, their value would be significantly higher.”

Analysts at BLS and the Census Bureau conducted such a calculation in 2008. The original poverty threshold was calculated by multiplying the cost of a minimum diet by three to reflect the fact that the average family spent roughly one-third of its income on food, according to the 1955 Household Food Consumption Survey. The BLS and Census analysts found that the average ratio of food spending to total income had since risen from 1:3 to between 1:6.2 and 1:9.8, depending on the approach used. The least generous of the poverty thresholds they calculated using these updated ratios was more than one and one-half times the current poverty threshold.[24]

Price indexes are not intended to fully capture all changes in families’ needs.[25] They aim to capture price growth, but not the cost of adding “new necessities” to a family’s budget in the first place. For example, rising employment rates for women at all income levels have resulted not only in new child care costs for many families but also in higher spending for prepared foods or meals outside the home by reducing working families’ time to prepare meals. By design, price indexes do not fully respond to the need to purchase more child care or prepared food, but these “new necessities” impose a cost on the growing number of two-earner and single-working-parent families and thus are appropriate to consider when updating or rethinking a poverty line.[26] This casts further doubt on the contention that the poverty line, as adjusted by the CPI-U, has risen too much.

In the long run, a poverty line should also capture rising living standards. Items such as plumbing or electricity that were once unavailable have become minimum requirements of acceptable living. More recently, access to a computer and internet service have rapidly become necessities for finding a job, completing schoolwork, or shopping less expensively online.

Those responsible for developing the official poverty measure recognized that family needs and living standards would likely rise slightly faster than inflation over time and assumed that the official poverty line would rise faster, too. Economist Mollie Orshansky, who in the 1960s developed what became the official poverty measure, wrote in 1963 that “the standard of adequacy changes with time.” Orshansky’s supervisor at the Social Security Administration, Ida Merriam, commented in 1967, “obviously today’s [official poverty] measure, even if corrected year by year for changes in the price level — the purchasing power of money — should not be acceptable twenty, ten or perhaps even five years hence.”

In a similar vein, Republican members of the Joint Economic Committee, commenting on the new poverty line in 1964, wrote, “In America, as our standard of living rises, so does our idea of what is substandard.”[27]

Most Americans apparently agree. Over time, public opinion about the smallest amount of money needed to get along in their community has risen about as fast or faster than the official CPI, according to Gallup polling data from 1967 to 2007. [28] These poll-based levels thus have risen faster than the slower-growing inflation measures the Administration has cited as candidates for adjusting the poverty line each year, such as the chained-CPI and the Personal Consumption Expenditures (PCE) deflator.

Other governmental measures of living standards have long tended to rise slightly faster than the CPI-U. For example, family budgets developed from 1947 to 1959 by the Labor Department and designed to capture a “modest but adequate” living standard rose 37 percent more than the CPI-U over that period.[29]

Similarly, the 1995 National Academy of Sciences panel on redesigning the poverty measure expressly designed its poverty line to rise slightly faster than the CPI-U to reflect increases in typical households’ consumption of necessities. The panel observed that families’ child care needs had risen due to women’s rising employment and added that it expected its proposed poverty threshold would evolve further as technology and society evolved. For example, the threshold would likely incorporate items such as computing technology once these became viewed as necessities and were incorporated into government data on household housing and utility expenses.

The Trump Administration’s approach of making only one, narrow technical change to lower the official poverty line, while ignoring the very strong evidence that the poverty line is rising too slowly to keep up with changing basic needs, is one-sided.

Efforts to lower the poverty threshold over time by adopting a slower-growing inflation measure are not justified by the evidence. Indeed, the lower inflation measures that the Trump Administration has floated may track the prices that poor households pay less accurately than the current measure does, not more accurately. They also would likely make an already low poverty line increasingly inadequate to raise a family.

At the very least, no change should be made to the indexing of the poverty threshold without collecting better price data for low-income households and undertaking much more careful and balanced study of the analytical issues involved, preferably by an external group such as the National Academy of Sciences.

[3] Price changes for housing made up 42 percent of the overall CPI-U in December 2018; rent of one’s primary residence made up 8 percent.

[4] Jonathan Church, “The cost of ‘basic necessities’ has risen slightly more than inflation over the last 30 years,” Beyond the Numbers: Prices and Spending, Vol. 4, No. 10, June 2015, https://www.bls.gov/opub/btn/volume-4/the-cost-of-basic-necessities-has-risen-slightly-more-than-inflation-over-the-last-30-years.htm.

[6] Greg Kaplan and Sam Schulhofer-Wohl, “Inflation at the Household Level,” Journal of Monetary Economics, 2017, https://gregkaplan.uchicago.edu/sites/gregkaplan.uchicago.edu/files/uploads/kaplan_schulhoferwohl_jme_2017.pdf. Figures are for the third quarter of each year. The differences between lower- and higher-income groups in other quarters are similar or even larger.

[9] Xavier Jaravel, “The Unequal Gains from Product Innovations: Evidence from the US Retail Sector,” The Quarterly Journal of Economics, Vol. 134, Issue 2, May 2019, pp. 715–783, https://academic.oup.com/qje/article-abstract/134/2/715/5230867. An earlier version of this paper is available at https://equitablegrowth.org/working-papers/unequal-gains-from-product-innovations/.

[11] The study examined the extent to which the CPI-U might overstate inflation due to “substitution bias” — that is, to the index not taking account of consumers’ changes in their spending patterns in response to relative changes in prices. Over the years 1984-1994, the study estimated that substitution bias caused a price index like the CPI-U to overstate inflation by a cumulative total of 1.99 percent for consumers overall. For poor consumers, substitution bias was quite similar (2.01 percent), slightly less (1.75 percent), or considerably less (0.25 percent), depending on how poor households were defined, although it was not possible to determine if these differences were statistically significant. Thesia I. Garner, David S. Johnson, and Mary F. Kokosi, “An Experimental Consumer Price Index for the Poor,” Monthly Labor Review, September 1996, https://www.bls.gov/opub/mlr/1996/09/art5full.pdf.

[12] For similar reasons, a 1995 National Academy of Sciences expert panel cautioned that, over the long run, the CPI-U could be a misleading guide to price changes for low-income families: “if the relative prices of necessities and luxuries change over time, as has happened in some periods in the past, the use of the CPI will not give an accurate picture of real adjustments for poor people.”

[23] The weekly response, multiplied by 52 weeks and inflated to 1989 dollars, was $15,646 a year, or 23 percent above the comparable poverty line ($12,675). More frequently, pollsters have asked Americans a related question about the minimum income needed to “get along” in their communities; the response to this question in 1989 was even higher: $21,788 annualized. See Denton R. Vaughan, “Exploring the Views of the Public to Set Income Poverty Thresholds and Adjust Them Over Time,” updated February 2004, https://www.census.gov/content/dam/Census/library/working-papers/2004/demo/wkppov20-cen.pdf.

[27] Gordon M. Fisher, “Is There Such a Thing as an Absolute Poverty Line Over Time? Evidence from the United States, Britain, Canada, and Australia on the Income Elasticity of the Poverty Line,” August 1995, https://www.census.gov/content/dam/Census/library/working-papers/1995/demo/fisher3.pdf. 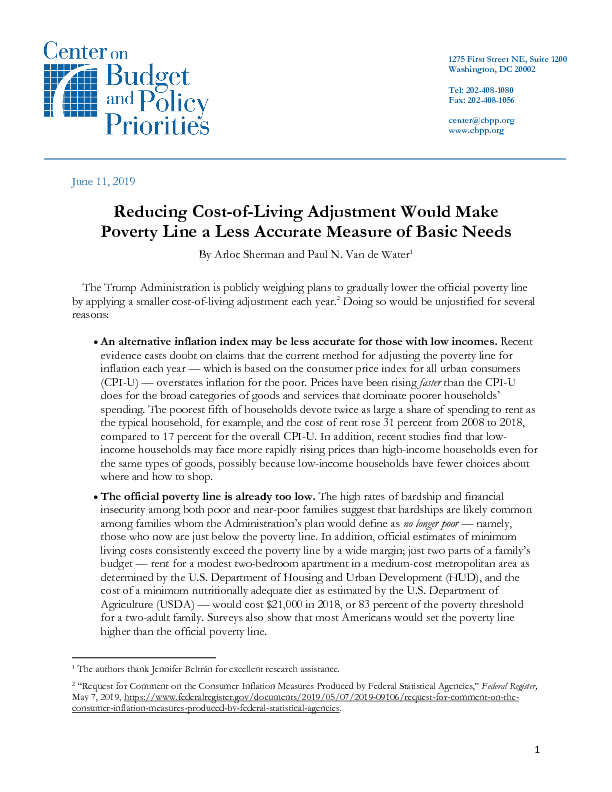