A close examination of the effectiveness of economic security programs, using more complete income figures than are widely available, reveals that policy shifts in aid for children in families with the least income have had a significant impact. In the decade after policymakers altered the public assistance system in the mid-1990s, it became much less effective at protecting children from deep poverty — that is, at lifting their incomes above half of the poverty line — and children’s deep poverty rose.[1] But during the Great Recession, assistance policies for children in poverty and deep poverty grew stronger, bolstered by temporary recovery initiatives, and prevented what likely would have been a large surge in deep poverty among children.

Deep poverty among children remains a significant problem. Some 2 million children live in families with income and benefits (net of taxes paid) below half the poverty line, or below just $14,000 a year for a typical family of four. To make significant progress in protecting children from this level of economic hardship will require strengthening income supports for families in deep poverty, including those where parents are out of work, either temporarily or over a longer period.

These findings emerge from a comprehensive assessment of poverty that blends the Supplemental Poverty Measure (SPM) — which counts more forms of income than the “official” poverty measure (among other differences) and therefore more accurately reflects the resources available to low-income households — with corrections for underreporting of key government benefits in survey data. The SPM counts income from SNAP, rental subsidies, and other federal non-cash benefits and refundable tax credits, which the official poverty measure omits. The SPM also subtracts federal and state income taxes, federal payroll taxes, and certain expenses (such as child care) from income when calculating a family’s available income for basics such as food, clothing, and shelter. A family is considered poor if its resources are below a poverty threshold that accounts for differences in family composition and geographic differences in housing costs. Our analysis ends in 2016 since that’s the most recent year for which we have data that correct for underreporting of key government benefits.

We created a poverty series merging data files from the Census Bureau’s Current Population Survey (CPS) with historical SPM data produced by a Columbia University research team[4] and corrections for underreporting created by the Urban Institute. We use the Census Bureau’s SPM data for 2009 through 2016, and the Columbia SPM data for prior years. Our poverty series uses the 2018 SPM poverty line, adjusted in years before for inflation.[5] In 2018, the deep poverty threshold (defined as half of the SPM poverty line) for a two-adult, two-child family renting in an average-cost community was $14,083.

We provide a fuller picture of the public income support system for low-income families by correcting for the underreporting of key government benefits in the Census data.[6] These corrections expose the increase in deep poverty for children during the first decade after the creation of TANF. This increase is masked in the uncorrected data because changes in the degree of underreporting make it appear that benefits fell less than they actually did. One final adjustment to our data addresses the concern that some people who appear to be in deep poverty are self-employed business owners who may possess substantial assets but are experiencing temporary business losses. To reduce this concern, this report omits families with negative cash income from our counts of families in deep poverty.

Our findings are consistent with earlier evaluations of the impact of imposing work requirements on cash assistance recipients. Evidence from welfare-to-work pilot programs in the early 1990s — based on rigorous, random-assignment study design and with income measured carefully using administrative records — showed that those programs tended to increase deep poverty. Those programs were, if anything, less harsh than the 1996 law.

A groundbreaking report from a National Academies of Sciences (NAS) committee that Congress charged with recommending ways to reduce child poverty found that either of two separate policy packages could cut children’s deep poverty — as well as child poverty overall — in half.[7] Comparing elements from these packages, the three policy changes with the largest impact on reducing child deep poverty are creating a child allowance, increasing SNAP benefits, and expanding housing vouchers.

One way to essentially create a child allowance would be to make the Child Tax Credit fully refundable — that is, fully available to children in low-income families regardless of whether their families have earnings. Raising SNAP benefits, providing rental vouchers to more low-income families, and increasing the number of families receiving TANF and the amount of direct cash assistance they receive would also lessen deep poverty.

[2] The decade from 1995 to 2005 is a particularly notable period for examining the effects of the 1996 law, as it begins the year before the law’s enactment and ends when the law’s major changes had mostly played out and before significant additional changes in low-income policies began blunting its negative impact on deep poverty. Further, 1995 and 2005 had similar overall unemployment rates and represent similar stages in the business cycle.

[5] Using a recent year’s SPM threshold and adjusting it back for inflation creates an “anchored” SPM series. Some analysts prefer it to the standard or “relative” SPM, which allows thresholds to grow slightly faster than inflation as living standards rise across decades. For more detail on our methodology, see the main report.

[6] We correct for the tendency of Census Bureau data to underreport income from three government assistance programs: AFDC/TANF, Supplemental Security Income, and SNAP. The corrections come from the Department of Health and Human Services/Urban Institute Transfer Income Model (TRIM). 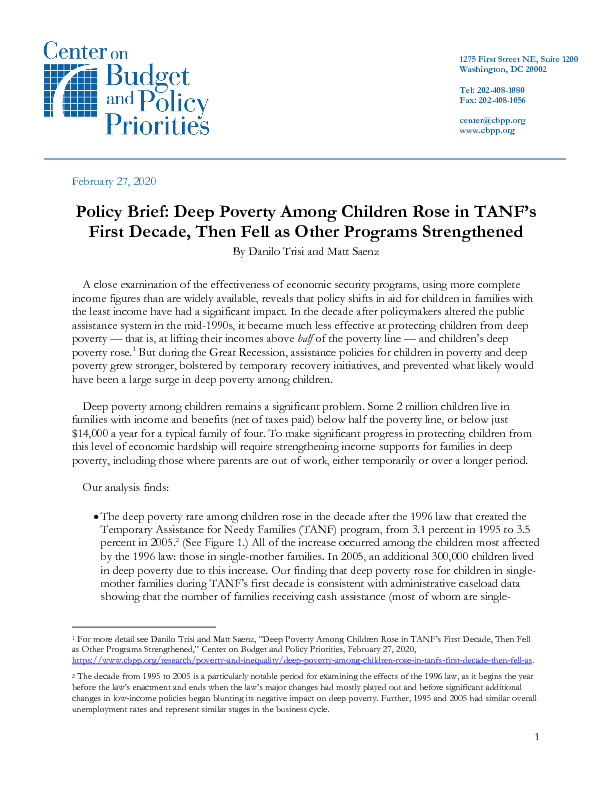