November 1 SNAP Cuts Will Affect Millions of Children, Seniors, and People With Disabilities

State-by-State Figures Highlight the Impacts Across the Country 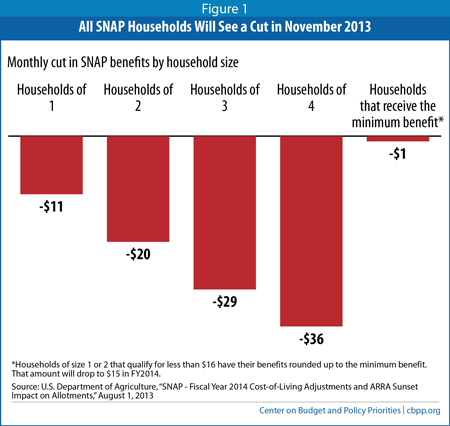 The 2009 Recovery Act’s temporary boost in Supplemental Nutrition Assistance Program (SNAP) benefits ends on November 1, 2013, which will mean a benefit cut for nearly all of the nearly 48 million SNAP recipients — 87 percent of whom live in households with children, seniors, or people with disabilities.[1]  House and Senate members who are now beginning to negotiate a final Farm Bill should keep this benefit cut in mind as they consider, in reauthorizing the SNAP program, whether to make even deeper cuts.

The SNAP benefit cut will make it even harder for families to put food on the table.  More than 80 percent of SNAP households have monthly income below the federal poverty line ($19,500 a year for a family of three), and more than 40 percent live in deep poverty, with income below half of the poverty line.  The Recovery Act’s temporary benefit increase boosted the ability of households to provide adequate food for their families, known as “food security,” research shows.

In addition, the November benefit cut will reduce, by millions of dollars in every state but Hawaii, the flow of money that not only would help families afford to eat, but also would inject money into the economy.  Studies show that in a distressed economy, every dollar of SNAP benefits creates at least about $1.70 in economic activity, as SNAP recipients spend their benefits on food quickly.  For example, California and Texas will each lose over $400 million in SNAP benefits that would have helped their residents eat in 2014; the potential economic impact is even greater.

The depth and breadth of the SNAP cuts that take effect in November are unprecedented.  Past cuts have affected specific states or groups, but they have not affected all participants nor been as large as these cuts.

They are taking effect the same week that the House and Senate Agriculture Committees begin their conference committee negotiations on the Farm Bill, which includes a reauthorization of and proposed cuts to SNAP.  The House version of the bill would cut SNAP by nearly $40 billion over the next 10 years, denying benefits to about 3.8 million people in 2014 and an average of 3 million people each year over the coming decade.

[1] We updated this paper on January 9, 2014 to accurately reflect that SNAP participants in Hawaii did not experience a decrease in benefits.  The U.S. Agriculture Department sets SNAP benefits for Alaska, Hawaii, Guam, and the Virgin Islands differently from the rest of the United States because the cost of food is different in these areas.  Hawaii’s Thrifty Food Plan exceeded the Recovery Act levels beginning in fiscal year 2013, and therefore its SNAP benefits were already set higher than Recovery Act levels.  Earlier versions of this paper incorrectly estimated that SNAP recipients in Hawaii would see a benefit cut.  SNAP households in Alaska, Guam, and the Virgin Islands experienced a benefit cut in November 2013 that was the same in proportional terms, but slightly different in dollar terms, from the cut in the 48 other states and the District of Columbia.

[2] For more information on the temporary benefit boost, see Stacy Dean and Dorothy Rosenbaum, “SNAP Benefits Will Be Cut for All Participants in November 2013,” Center on Budget and Policy Priorities, Revised August 2, 2013,  https://www.cbpp.org/cms/index.cfm?fa=view&id=3899.