New Tax Cuts in Ryan Budget Would Give Millionaires $265,000 on Top of Bush Tax Cuts

Even as House Budget Committee Chairman Paul Ryan’s budget would impose trillions of dollars in spending cuts, at least 62 percent of which would come from low-income programs,[1] it would enact new tax cuts that would provide huge windfalls to households at the top of the income scale.  New analysis by the Urban-Brookings Tax Policy Center (TPC) finds that people earning more than $1 million a year would receive $265,000 apiece in new tax cuts, on average, on top of the $129,000 they would receive from the Ryan budget’s extension of President Bush’s tax cuts.[2]

The new tax cuts at the top would dwarf those for middle-income families.  After-tax incomes would rise by 12.5 percent among millionaires, but just 1.8 percent for middle-income households (see Figure 1 and footnote 6).  Low-income working families would actually be hit with tax increases.

Chairman Ryan claims that his budget would fully offset the cost of his proposed tax cuts by closing tax expenditures (tax credits, deductions, and other preferences) for high-income households.  But his budget contains no specific proposals to do so, and meeting this goal would be all but impossible, given that the Ryan budget rules out reducing the tax expenditure most heavily tilted to high-income households:  the preferential rates for capital gains and dividends.[3]

By combining large budget cuts (and tax increases) that disproportionately harm lower-income Americans with big tax cuts that disproportionately help those at the top of the income scale, the Ryan budget would significantly worsen inequality and increase poverty and hardship (and reduce opportunity as well, through deep cuts in programs such as Pell Grants to help low-income students afford college).

The Ryan budget includes a number of specific tax cuts, on top of making the Bush tax cuts permanent.  All of its new tax cuts are both expensive and tilted toward high-income households.  It would cut the top individual tax rate to 25 percent, the lowest level since the Hoover Administration more than 80 years ago.  It would cut the corporate rate to 25 percent and eliminate both the Alternative Minimum Tax and the Affordable Care Act’s increase in the Medicare tax for high-income people.

A new TPC analysis finds that people with incomes above $1 million would receive a $265,000 average annual tax cut just from the new Ryan proposals (i.e., not counting what they would also receive from extension of the Bush tax cuts).  Middle-income taxpayers with incomes between $50,000 and $75,000 would receive $975, on average.[4] 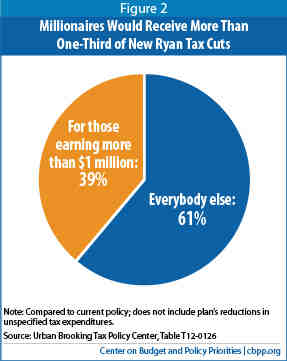 The new TPC figures show that the Ryan tax cuts are starkly regressive:  after-tax incomes of people who make more than $1 million a year would rise by 12.5 percent, on average — seven times more than the 1.8 percent average gain for middle-income households.[5]

Underscoring how tilted the proposal is toward the top, the TPC figures show that people making more than $1 million a year would receive 39 percent of the new Ryan tax cuts even though they constitute less than one-half of 1 percent of U.S. households (see Figure 2).

Many low-income working families would actually see an increase in their tax burdens under the Ryan plan.  While the Ryan budget makes permanent all of the Bush tax cuts including those for high-income households, which are slated to expire at the end of 2012, it would not fully extend the tax cuts for working-poor households that were enacted under President Obama and also are scheduled to expire at the end of this year.[6]

As a result, while the most affluent people in the country would receive very large income gains under Chairman Ryan’s specific tax-cut proposals, millions of working-poor families would see their small after-tax incomes reduced.  A single mother with two children who works full time at the minimum wage and makes $14,500 a year would have her Child Tax Credit cut by more than $1,500, from $1,725 to $218.

As noted, these regressive new tax cuts would come on top of the Bush tax cuts, which also were costly and provided disproportionate gains to the highest-income households.  Combined, the Bush and Ryan tax cuts would provide an annual windfall of nearly $400,000 apiece, on average, to people
with incomes over $1 million (see Figure 3).  For these people, their tax cuts would be eight times the average total after-tax incomes of people in the middle 20 percent of the income scale.[7]

The Bush tax cuts contributed significantly to the emergence of large deficits over the past decade and would prove even more unaffordable in coming decades if policymakers extended them.[8]  Yet, instead of letting them expire as the economy recovers, the Ryan budget would “double down” by extending them and adding another round of costly, regressive tax cuts on top.

[3] Chuck Marr, “Ryan Budget’s Claim to Finance Its Tax Cuts for the Wealthy by Curbing Their Tax Breaks Does Not Withstand Scrutiny,” Center on Budget and Policy Priorities, March 22, 2012, https://www.cbpp.org/cms/index.cfm?fa=view&id=3722.

[6] Analysis of the budget data in the Ryan budget shows it would let the refundable portion of the expansions of the Earned Income Tax Credit, Child Tax Credit, and American Opportunity Tax Credit that were enacted in 2009 expire at the end of this year, as reflected in the new TPC analysis (Table T12-0126).