New Medicaid Citizenship Documentation Requirement is Taking a Toll: States Report Enrollment Is Down and Administrative Costs Are Up

A new federal law that states were required to implement July 1 is creating a barrier to health-care coverage for U.S. citizens — especially children — who are eligible for health insurance through Medicaid.  The new law, a provision of the Deficit Reduction Act of 2005, requires U.S. citizens to present proof of their citizenship and identity when they apply for, or seek to renew, their Medicaid coverage.  Prior to enactment of the law, U.S. citizens applying for Medicaid were permitted to attest to their citizenship, under penalty of perjury.

In the eight months following implementation of the new requirement, an increasing number of states are reporting marked declines in Medicaid enrollment, particularly among low-income children.  States also are reporting significant increases in administrative costs as a consequence of the requirement.

This analysis presents the data available so far on this matter.  The available evidence strongly suggests that those being adversely affected are primarily U.S. citizens otherwise eligible for Medicaid who are encountering difficulty in promptly securing documents such as birth certificates and who are remaining uninsured for longer periods of time as a result.

The new requirement also appears to be reversing part of the progress that states made over the past decade in streamlining access to Medicaid for individuals who qualify, and especially for children.  For example, to improve access to Medicaid and reduce administrative costs, most states implemented mail-in application procedures, and many states reduced burdensome documentation requirements.  The new Medicaid citizenship documentation requirement now appears to be pushing states in the opposite direction, by impeding access to Medicaid.  Families must furnish more documentation and may be required to visit a Medicaid office in person to apply or renew their coverage, bypassing simpler mail-in and on-line enrollment opportunities, because they must present original documents such as birth certificates that can take time and money to obtain.  This is likely to cause the most difficulty for working-poor families that cannot afford to take time off from work to visit the Medicaid office and for low-income families residing in rural areas.

What State Officials Are Saying About the Citizenship Documentation Requirement

“The largest adverse effect of this policy has been on people who are American citizens … we have not turned up many undocumented immigrants receiving Medicaid in Waterloo, Dubuque or anywhere else in Iowa.”

“[Kansas] Gov. Kathleen Sebelius … recently said the state's enrollment has declined by 18,000 people since the citizenship documentation requirement took effect. Many of those people are likely citizens who simply lack documents, she said, who may experience a harmful gap in health insurance coverage.”

"While we understand that the new law targets illegal immigrants, we must point out that the impact of the law in our state is mostly falling on eligible citizens."

“These numbers [the Medicaid enrollment decline] are not driven primarily by the loss of population from New Orleans and other parishes affected by Hurricane Katrina…We are quite confident that the overwhelming majority of these children are citizens — born right here in Louisiana — and not ineligible alien children.”

“Congress wanted to crack down on illegal immigrants who got Medicaid benefits by pretending to be U.S. citizens …but the law is hurting U.S. citizens, throwing up roadblocks to people who need care, at a time when we in Wisconsin are trying to increase access to health care.”

The new citizenship documentation requirement — which the Bush Administration did not request and the Senate initially did not adopt, but which the House of Representatives insisted upon in conference — was presented by its proponents as being necessary to stem a problem of undocumented immigrants securing Medicaid by falsely declaring themselves to be U.S. citizens.  The new requirement was adopted despite the lack of evidence that such a problem existed.  In response to a report in 2005 by the Inspector General of the Department of Health and Human Services, Mark McClellan, then the Administrator of the Centers for Medicare and Medicaid Services at HHS, noted:  “The [Inspector General’s] report does not find particular problems regarding false allegations of citizenship, nor are we aware of any.”

Impact of the Citizen Documentation Requirement on Medicaid Applicants and Beneficiaries: The Early Evidence

Medicaid enrollment figures for all states for the period since the new requirement was implemented on July 1 are not yet available.  By contacting several individual states that do have such data, however, we were able to secure enrollment information from Wisconsin, Kansas, Iowa, Louisiana, Virginia, New Hampshire and Ohio.  The data show the following:

Two types of problems are surfacing:

Some states have designed mechanisms specifically to track enrollment changes resulting from the new procedures. Wisconsin, for example, has established computer codes to distinguish when Medicaid eligibility is denied or discontinued due to a lack of citizenship or identity documents.  In other states, a comparison of current and past enrollment trends strongly suggests that the new requirement is largely responsible for the enrollment decline.  For example, in many states aggressive “back to school” outreach activities conducted in August and September usually result in increased child enrollment in September and October.  In 2006, however, states such as Virginia and Louisiana reported that child enrollment declined despite vigorous promotional campaigns, indicating that the new requirement undermined the value of the outreach efforts.

The Medicaid enrollment declines identified in this paper do not appear to be driven by broader economic trends or a change in the employment of low-income families.  If that were the case, parallel enrollment decline trends would appear in the Food Stamp Program, which is the means-tested program whose enrollment levels are most responsive to such developments.  Instead, Food Stamp caseloads have been increasing slightly in recent months.  Moreover, each of the states identified in this paper as having sustained a drop in Medicaid enrollment saw its food stamp caseload rise since implementing the citizenship documentation requirement. (Figure 1).

[2]  An example comparing Food Stamp and Medicaid enrollment in Wisconsin is shown (Figure 2).

Both Medicaid and the Food Stamp Program serve similar populations of low-income families and are often administered by the same agencies and caseworkers. A key difference is that the citizenship documentation rules were applied to Medicaid but there were no such changes in the Food Stamp Program.  It thus appears that the changes in Medicaid enrollment are a result of changes in Medicaid policies — particularly citizenship documentation — that do not affect eligibility for food stamps.

“We recently saw a toddler in our pediatrics clinic. Her grandmother, who has custody, brought her in. She was worried that her granddaughter was behind in her immunizations, and since the little girl has no health insurance, the grandmother turned to us for help. We then discovered that the child, who had been born prematurely, suffers from chronic lung disease and her development is considerably delayed. She needs a nebulizer to deliver the medication to help her breathe and she also needs speech and other therapy. This child is eligible for Medicaid, but because her grandmother does not have the required birth certificate, she could not be enrolled. The child will get Medicaid coverage when we obtain her birth certificate, most likely at least a month from now. But in the meantime, necessary treatment has been delayed because her grandmother cannot afford to pay the bills during the wait for an eligibility determination. For a child with developmental delays, every day without the necessary therapy and treatment makes it more difficult for her to catch up with her peers… It has gotten so complex that we’ve added a lawyer to our clinic to help sort things out.” 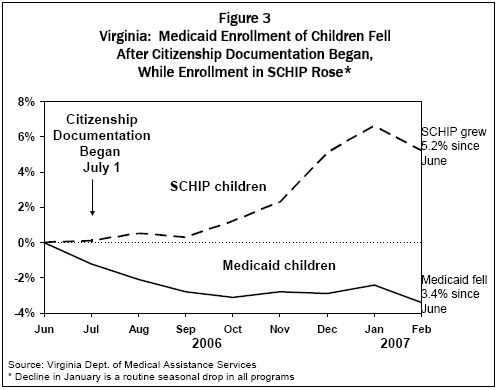 Data on state Medicaid administrative costs for the months since July 1 are not available from CMS or any other national source.  Several states, however, have examined the impact of the new Medicaid citizenship documentation requirement on their administrative expenditures.  The costs they expect to incur are below.

Based on these findings and reports, and strong anecdotal evidence, it seems increasingly clear that the new Medicaid citizenship documentation requirement is having a negative impact on Medicaid enrollment, especially among children.  Insufficient information is available to determine the precise extent to which individuals whose Medicaid eligibility has been delayed, denied or terminated are U.S. citizens, eligible legal immigrants, or ineligible immigrants.  However, the fact that significant numbers of individuals are being approved for Medicaid after delays of many months, during which they were uninsured, demonstrates that the requirement is adversely affecting substantial numbers of U.S. citizens, especially children who are citizens.  Moreover, a large body of research conducted over a number of years has conclusively shown that increasing documentation and other administrative burdens generally results in eligible individuals failing to obtain coverage as a result of the enrollment and renewal processes having become more complicated to understand and more difficult to navigate.

[19]  Regarding the Medicaid enrollment declines, Anita Smith, Chief of the Bureau of Medical Supports for the Iowa Department of Human Services has stated: “There is no evidence that the [enrollment] decline is due to undocumented aliens leaving the program.  Rather, we believe that these new requirements are keeping otherwise eligible citizens from receiving Medicaid because they cannot provide the documents required to prove their citizenship or identity.”

A number of governors across the nation are announcing their intentions to push new initiatives to cover the uninsured, particularly children.  These proposals are being designed to build upon existing public coverage programs, of which Medicaid is the largest, and invariably these proposals call for the enrollment of individuals who are currently eligible for existing programs but remain uninsured.  Success will depend, in large measure, on policies and procedures that facilitate rather than frustrate such efforts so that eligible individuals can obtain the benefits for which they qualify.  The Medicaid citizenship documentation requirement, which appears to be an extremely blunt instrument, stands to undercut such efforts by placing a daunting administrative obstacle in the way of many low-income U.S. citizens who otherwise have shown that they qualify or by discouraging potentially eligible citizens from applying because the process appears too complex or intimidating.  The requirement also appears to be deflecting state human and financial resources away from activities designed to reach eligible children and families and to enroll them in the most efficient and effective manner.

[4] Data from Iowa, Louisiana, Virginia  and New Hampshire first published in: Resuming the Path to Health Coverage for Children and Parents: A 50 State Update on Eligibility Rules, Enrollment and Renewal Procedures, and Cost-Sharing Practices in Medicaid and SCHIP in 2006 by Donna Cohen Ross, Laura Cox and Caryn Marks, Kaiser Commission on Medicaid and the Uninsured, January 2007.