On September 27, the House Ways and Means Committee approved H.R. 6134, which would make Health Savings Accounts (HSAs) more attractive as tax shelters for high-income individuals. Ways and Means Chairman Bill Thomas (R-CA) stated that the bill could be enacted before the 109th Congress adjourns. The bill is particularly disturbing in light of an important new Government Accountability Office (GAO) report finding that HSAs already are used disproportionately by affluent households and provide disproportionate tax subsidies to them. The GAO report also provides new evidence that HSAs could raise the cost of health care for less healthy Americans by encouraging “adverse selection.”

What Are Health Savings Accounts?

Established by the 2003 Medicare drug legislation, Health Savings Accounts (HSAs) are accounts in which individuals who have a high-deductible health policy can save money to pay out-of-pocket health expenses. In tax year 2006, someone who enrolls in a health plan with a deductible of at least $1,050 for individual coverage and $2,100 for family coverage may establish an HSA.

HSA contributions are tax deductible and may be placed in stocks, bonds, or other investment vehicles, with the earnings accruing tax free. Withdrawals also are tax exempt if used for out-of-pocket medical costs. No other savings vehicle offers both tax-deductible contributions and tax-free withdrawals. And since there are no income limits on HSA participation, affluent individuals whose incomes exceed IRA participation limits — or who have “maxed out” their IRA or 401(k) contributions — can use HSAs to shelter more money. As a result, many analysts have warned that HSAs are likely to be used extensively as tax shelters by high-income individuals.

What Would the House HSA Bill Do?

The bill approved by the Ways and Means Committee would make HSAs even more attractive as tax shelters to high-income households, in two ways:

What Does the New GAO Report Tell Us About Actual HSA Use?

Until recently, little or no solid data have been available to assess whether HSAs are being used disproportionately by affluent individuals. The new GAO study breaks new ground, by providing data from the Internal Revenue Service on all Americans who made HSA contributions in 2004. The GAO study also contains data from three large employers who offer both HSA-eligible plans and traditional coverage on which option their employees have chosen. (To supplement these data, the GAO conducted focus groups of individuals at these three firms.) Finally, the GAO reviewed data on enrollment in HSA-eligible plans from several national surveys of employers.

As the first solid, broad-based data on actual HSA use by people in different income groups, the GAO findings are now the premier data in the field to determine whether HSAs are being disproportionately used by high-income households. The GAO’s principal findings are: 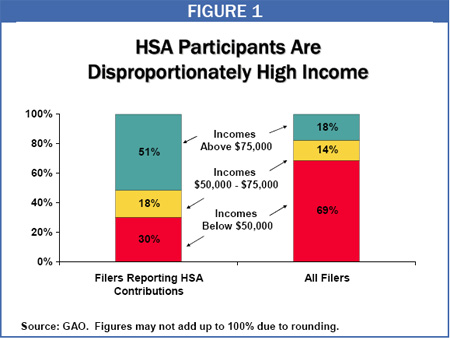 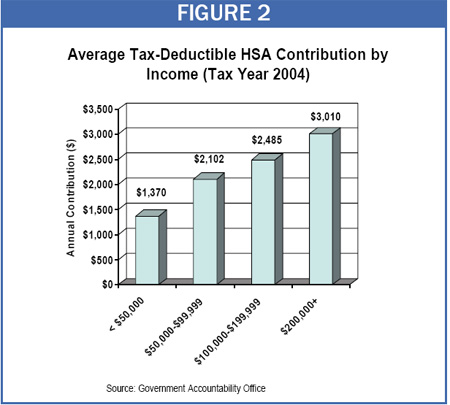 In sum, evidence suggests that HSAs already are of disproportionate benefit to high-income taxpayers and are being used by many participants primarily as tax shelters. The House bill would exacerbate both of these problems.

[2] An individual making such a transfer would have to remain enrolled in a HSA-eligible high-deductible health plan for at least 12 months.