On January 27, the Congressional Budget Office issued a new analysis of the Medicaid provisions of the budget reconciliation conference agreement,[1] on which the House of Representatives is expected to vote February 1. The conference agreement, which the Senate passed 51-50 in late December with Vice President Cheney breaking the tie, includes significant changes in the Medicaid program that will affect millions of low-income beneficiaries.[2] The just-released CBO analysis finds that the bill’s Medicaid changes would have the following effects.

1. Higher Co-payments and Premiums. Under the conference agreement, states would be permitted to increase co-payments substantially and to impose premiums on many beneficiaries, including some children. CBO estimates these co-payment and premium increases would reduce Medicaid expenditures by $1.9 billion over five years and $9.9 billion over ten years. Some 70 percent of these savings would be due to higher co-payment changes, with the remainder resulting from higher premiums. According to CBO:

These estimates may understate the effects on low-income families and individuals. CBO acknowledges it is uncertain how states will respond to the new co-payment and premium options and the extent to which states will make far-reaching changes. If more states elect to increase co-payments and impose premiums than CBO has assumed, or states set the charges higher than CBO has assumed, more Medicaid beneficiaries will be adversely affected and lose access to medically necessary services and prescription drugs.

CBO’s estimates could turn out to understate the effects for another reason, as well. Previous research suggests that CBO’s projections regarding how many beneficiaries will lose coverage when premiums are imposed are conservative. CBO estimates that in 2015, about 1.3 million beneficiaries who are charged premiums for Medicaid coverage will face premiums equal to between one and three percent of their income, and that 65,000 such individuals will lose coverage as a consequence. Prior research on the effect of premiums on low-income beneficiaries in Medicaid and related health care programs indicates that premiums at these levels could lead to reductions in coverage for between 16 and 49 percent of those affected, or between 210,000 and 640,000 people.[3]

2. Reduced Benefits: The conference agreement would allow states to reduce the health care services that Medicaid covers for various beneficiaries, including many non-disabled working-poor parents. CBO estimates these provisions would result in $1.3 billion in reduced Medicaid expenditures over five years and $6.1 billion over ten years. According to CBO:

When the conference negotiators worked behind closed doors to secure much of the conference agreement’s health care savings through Medicaid co-payment and benefits provisions that affect low-income beneficiaries, they omitted or largely gutted a series of provisions included in the Senate-passed reconciliation bill that would have achieved substantial savings by curtailing excessive payments to Medicare managed care plans and securing better prices for Medicaid in obtaining prescription drugs.[4] Conference negotiators could have adopted those Senate provisions and significantly reduced Medicare and Medicaid expenditures without harming large numbers of beneficiaries with very limited incomes, as the Senate bill did. Instead, they elected to cater to special interests such as managed care plans and pharmaceutical companies while reducing beneficiaries’ access to care.

[2] For an overview of the Medicaid provisions adversely affecting low-income Medicaid beneficiaries in the conference agreement, see Sharon Parrott, Edwin Park, and Robert Greenstein, “Assessing the Effects of the Budget Conference Agreement on Low-Income Families and Individuals,” Center on Budget and Policy Priorities, revised January 9, 2006. 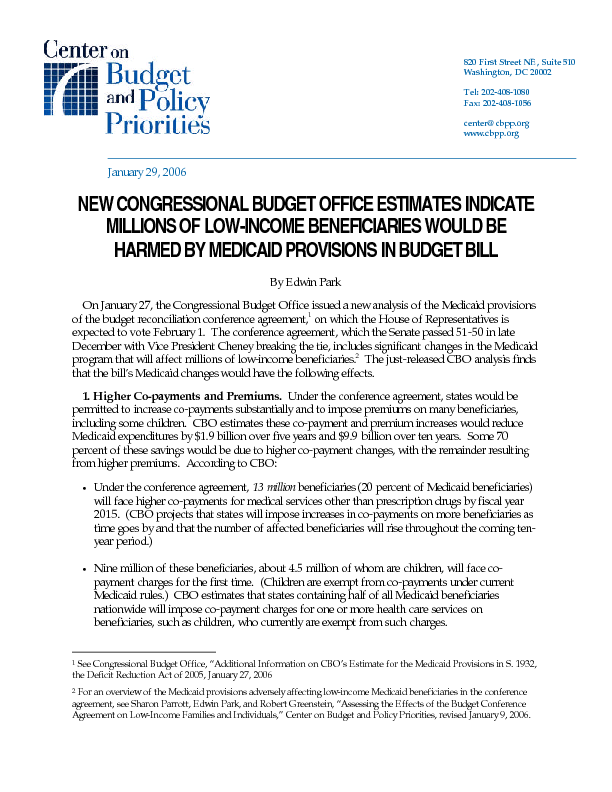