Contrary to claims by some critics, the Medicaid expansion in the new health reform law will overwhelmingly provide coverage to people who otherwise would be uninsured, rather than shift people who already have private coverage to Medicaid.

Under the new law, beginning in 2014 Medicaid will cover non-elderly individuals with incomes up to 133 percent of the federal poverty line — about $29,000 for a family of four.[1] The Congressional Budget Office (CBO) estimates that by 2019, 16 million more adults and children will enroll in Medicaid and gain access to affordable coverage as a result.

Some critics claim that a large share of the insured individuals who become eligible for Medicaid will drop their existing employer or individual market coverage and instead enroll in Medicaid. This claim does not withstand scrutiny: there has been only modest substitution of public for private coverage, or “crowd-out,” in similar state-level expansions of public programs in the past.[2] 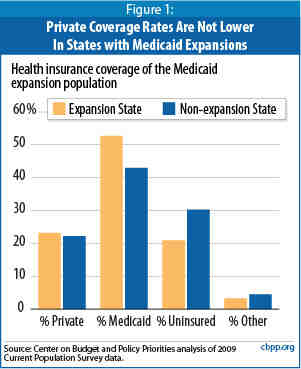 Some studies that claim health reform’s Medicaid expansion will impose high costs on states rely on exaggerated estimates of the number of people who will drop private coverage when they become eligible for Medicaid.[3] The analysis noted above that was conducted for Indiana assumes that all insured individuals who become eligible for Medicaid will drop their insurance and

enroll in Medicaid; as a result, the analysis estimates that nearly half of new Medicaid enrollees will have had private insurance. [4]

Cost estimates for Indiana would be 28 percent to 38 percent lower if the analysis assumed a crowd-out rate that reflected consensus research findings. [5]

If critics’ claims regarding the extent of crowd-out that will occur under health reform are correct, states that have expanded Medicaid coverage for low-income adults should have significantly lower rates of private coverage among that population than other states. An analysis of Census data finds that this is not the case.

In the 12 states that have expanded Medicaid to cover adults with incomes at or above the poverty line, an average of 23 percent of individuals with incomes eligible for Medicaid have private coverage. In the states that haven’t expanded Medicaid, a nearly identical share — 22 percent — of the same population has private coverage (see Figure 1).[6] Moreover, relative to non-expansion states, the 12 expansion states have a much higher proportion of low-income residents enrolled in Medicaid (53 percent versus 40 percent) and a much lower proportion of low-income residents who are uninsured (21 percent compared to 30 percent).

Nor do these results simply reflect underlying conditions in these groups of states that existed before the Medicaid expansions went into effect.

Consider the examples of Arizona and New York, which expanded Medicaid coverage to poor adults in 2000 and 2001, respectively. In these two states, the decline in private coverage has been no steeper since the expansions were implemented than in non-expansion states. What has occurred in these two states since the expansions took effect is that Medicaid coverage growth has been more robust, and the increase in uninsurance among poor adults has been smaller, than in non-expansion states.[7]

These data strongly indicate that the Medicaid expansions have contributed to a notable decline in uninsured populations rather than to substantial crowding out of existing private coverage.[8]

Several other research studies have examined whether Medicaid crowds out private health insurance coverage, focusing primarily on state expansions in the 1990s of children’s Medicaid eligibility to income levels similar to those that will apply to adults under health reform. [9] The most common estimates suggest that if a Medicaid coverage expansion increases enrollment by 100 children, some 80 to 90 of them will have been uninsured, while the rest will have shifted from employer-based insurance. (The estimated size of the crowd-out effect varies from study to study because of methodological differences; some studies find no statistically significant evidence of crowd-out, while others find some crowd-out.)

In addition, the marked reduction in the number of uninsured low-income children after CHIP was created in 1997 and states began easing barriers that were impeding the entry of eligible low-income children into Medicaid provides clear evidence that Medicaid and CHIP expansions primarily benefited uninsured children. Data from three federal agencies demonstrate that the growth of Medicaid and CHIP coverage for children far outweighed the modest losses in private coverage, and led to sharp reductions in the number of uninsured children:

Finally, much of the research on crowd-out in children’s coverage finds that it is a significant factor only when states expand coverage further up the income scale, since children in moderate-income families are more likely to have access to affordable employer-based coverage than their lower-income counterparts. Using a broad definition of crowd-out, CBO concludes that between 25 percent and 50 percent of children enrolled in CHIP — which covers children with incomes too high to qualify for Medicaid — previously had private health insurance.[13] However, two studies that examined the impact of CHIP program expansions found no significant evidence of crowd-out among poorer children eligible for Medicaid. (Expansions higher up the income scale can increase participation among those with lower incomes.) These studies suggest that crowd out is unlikely to be a significant issue among the poor and near-poor people who will be made newly eligible for Medicaid under health reform.

Some state legislators and administrators have expressed concern that the health reform law’s Medicaid expansion will place too great a weight on states’ budgets. A new study by the Urban Institute and the Kaiser Commission on Medicaid and the Uninsured estimates, however, that states’ additional costs under health reform — including costs associated with the predicted levels of crowd-out — will be modest, considering the law’s broad coverage expansion.

The net cost of the Medicaid expansion may be even less, the authors argue, since the expansion of coverage will likely reduce state costs associated with providing uncompensated care to the uninsured. Referring to criticisms of the expansion as extremely costly to states, the study’s co-author John Holahan commented, “It’s absurd. They come out ahead. It’s just crazy.”

The study’s assumed crowd-out rates fall into the general range — albeit at the higher end — of the existing research. Between 23 percent and 30 percent of those newly enrolled in Medicaid will come from the ranks of the currently insured — including some who would be shifting from other public programs including CHIP) — the study concludes.c

a John Holahan and Irene Headen, Medicaid Coverage and Spending in Health Reform: National and State-by-State Results for Adults at or Below 133% FPL, The Urban Institute and the Kaiser Commission on Medicaid and the Uninsured, May 2010.

c Under the “standard” scenario, 15.9 million people who are newly eligible for Medicaid will enroll in the program, 11.2 million of whom are uninsured. Under the “enhanced” scenario, 22.8 million people will enroll in Medicaid, 17.5 million of whom are uninsured. These figures translate into crowd-out rates of 30 percent and 23 percent, respectively. However, some of the insured individuals who enroll in Medicaid will have been enrolled in CHIP or state-financed health insurance programs, so the incidence of Medicaid substituting for private coverage will be less than these estimates imply.

Another reason why crowd-out is unlikely to be a significant factor in the Medicaid expansion is that most low- and moderate-income individuals and families lack access to employer-based coverage. Many low-income workers are employed in small firms and service industries where health insurance is typically not offered as a benefit. In 2005, only 34 percent of non-elderly workers with incomes below the poverty line were offered coverage through their job, compared to 90 percent of workers with incomes at least four times the poverty line. [14] In addition, many low-income workers who are offered employer-based insurance do not take up the coverage because they cannot afford the premiums. [15]

When a low-income family that does have access to private insurance enrolls in Medicaid, the decision is usually beneficial for the family. The private insurance available to the family may contain significant gaps in coverage or may require payment of substantial premiums and large deductibles and cost-sharing charges. Research has shown that when low-income families face large cost-sharing charges, they often go without — or delay obtaining — health care services that they or their children need.[16]

The existing body of research and the results of new analysis show that claims that the new law’s Medicaid expansions will lead to extensive crowd-out are highly exaggerated. Crowd-out rates among the low-income population are best estimated at between 10 percent and 20 percent, significantly less than the analyses touted by critics assume. The incidence of the substitution of public coverage for private coverage is very low at this income range, in large part because of the scarcity of affordable private coverage options. At the same time, health reform’s Medicaid expansion can be expected to lead to a substantial reduction in the number of low-income Americans who are uninsured and to a large increase in access to care among many of the nation’s more vulnerable citizens.

[1] In addition, the law requires that states disregard 5 percent of an applicant’s individual or family income when evaluating eligibility for Medicaid. Thus, the effective income-eligibility threshold is 138 percent of the federal poverty line.

[2] Crowd-out can be defined in several different ways, and estimates of the magnitude of crowd-out in public program expansions vary. Generally, crowd-out refers to the substitution of publicly funded coverage for existing private coverage. Individuals may choose to forgo coverage available from their employer or in the individual market because publicly funded coverage is more affordable or more comprehensive. Alternatively, employers may choose to drop coverage for their workers once public coverage becomes available.

[3] For an analysis examining how the federal government will bear the vast majority of the costs of the Medicaid expansion, see January Angeles, “Health Reform Is a Good Deal for States,” Center on Budget and Policy Priorities, April 26, 2010.

[5] This estimate is based on a Center on Budget and Policy Priorities (CBPP) analysis assuming crowd-out rates of between 10 percent and 20 percent. The Indiana analysis that assumes a 48 percent crowd-out reaches that level only by assuming that 100 percent of those with private insurance who become newly eligible for Medicaid will drop such coverage and shift to Medicaid. The Indiana analysis also assumes that all uninsured people who become eligible for Medicaid will participate, ignoring the fact that there is no means-tested program that achieves 100 percent participation, or close to it, among those who are eligible.

[8] Based on a CBPP analysis of the Annual Social and Economic Characteristics (ASEC) supplement to the 2009 Current Population Survey (CPS). The CBPP analysis includes all non-elderly individuals below 138 percent of the federal poverty line.

[10] The data in these first two bullets are based on CBPP analyses of the CDC’s National Health Interview Survey and the Census Bureau’s Current Population Survey.

[15] Gregory Acs and Austin Nichols, “Low-income Workers and Their Employers: Characteristics and Challenges,” The Urban Institute, May 2007.

[16] Leighton Ku and Victoria Wachino, “The Effect of Increased Cost-Sharing in Medicaid,” Center on Budget and Policy Priorities, July 7, 2005.