Newly available data from three states show that white and African American children are much more likely than Hispanic children to have their Medicaid coverage delayed, denied, or terminated as a result of a citizenship documentation requirement that took effect last year.  These data provide further evidence that the requirement, purportedly aimed at preventing undocumented immigrants from improperly obtaining Medicaid, is instead overwhelmingly affecting U.S. citizens who are eligible for the program.  (Under the requirement, low-income individuals who state they are U.S. citizens must produce a passport or birth certificate, naturalization document, or similar documentation to prove they are U.S. citizens when they apply for Medicaid or renew their Medicaid coverage.[1])

The three states — Alabama, Kansas, and Virginia — are the only states known to have analyzed the racial composition of those in the state who have been harmed by the documentation requirement.  In all three states, Medicaid enrollment declined by a larger percentage among white and African American children than among Hispanic children after the requirement took effect.  (See Table 1.)

In Virginia, enrollment among Hispanic children actually rose under the documentation requirement, even as it fell sharply for white and African American children.

The new data come on top of earlier information from a number of states demonstrating that the requirement has led to a significant drop in Medicaid enrollment — and that the drop appears to be due almost entirely to difficulties that citizens are encountering in obtaining birth certificates or passports quickly.[2]  (On July 2, the Department of Health and Human Services issued final regulations regarding the citizenship documentation requirement; the regulations largely codify the guidance HHS previously issued and under which states have been operating.  The regulations are not expected to ease substantially the difficulties that the requirements have posed for many families; see the box on page 5 for further discussion of this matter.)

Requirement Imposed Despite Lack of Evidence of Problem

The documentation requirement, a controversial provision of the Deficit Reduction Act of 2005, requires U.S. citizens to present proof of their citizenship and identity when they apply for, or seek to renew, their Medicaid coverage.  Prior to enactment of the law, U.S. citizens applying for Medicaid were permitted to attest to their citizenship, under penalty of perjury.

Proponents claimed the requirement was necessary to stem a problem of undocumented immigrants securing Medicaid by falsely declaring themselves to be U.S. citizens.  (Undocumented immigrants have never been eligible for regular Medicaid.[3])  Yet there was no evidence at the time that such a problem existed.  In response to a report in 2005 by the Inspector General of the Department of Health and Human Services, Mark McClellan, head of the Centers for Medicare and Medicaid Services, noted:  “The [Inspector General’s] report does not find particular problems regarding false allegations of citizenship, nor are we aware of any.”[4]

Undocumented immigrants include individuals of various racial and ethnic groups, but analysts agree that they are predominantly Hispanic.  According to recent estimates from the Pew Hispanic Center, approximately 78 percent of undocumented immigrants are from Mexico, Central America, or Latin America.[5]  Therefore, if the documentation requirement were indeed preventing significant numbers of undocumented immigrants from improperly obtaining Medicaid, one would expect that Hispanics would constitute the largest share of individuals affected.  Instead, data from Alabama, Kansas, and Virginia show the opposite:  Hispanics are the group that is least affected.

This fact strongly suggests that the documentation requirement is primarily affecting U.S. citizens, not undocumented immigrants.  State officials in several states have likewise stated that the requirement is primarily affecting U.S. citizens.[6]  In fact, Kansas and Virginia report that as of May, in the course of enforcing the requirement, they each have unearthed only a single case where someone receiving Medicaid had incorrectly claimed to be a U.S. citizen, even as thousands of citizens in these states had their Medicaid coverage denied or delayed because they did not have ready access to birth certificates or passports.

There are several reasons why Hispanic citizens might be less affected by the requirement than white or African American citizens, according to Shelby Gonzales, who oversees health outreach activities in northern Virginia as director of the Partnership for Healthier Kids at Inova Health System.[7]  Because they often are concerned that their citizenship status might be questioned, Hispanic citizens tend to place particular importance on having vital documents that attest to their citizenship available in a safe, accessible place.  They also tend to apply for a birth certificate immediately after a child’s birth.

At the same time, there are several reasons why a citizen family of any racial or ethnic group may not be able to produce the required documents.  Parents may never have had an official copy of the birth certificate for a child or may have lost the birth certificate over the years when moving from one home to another (or as a result of fire, flood, or similar event).  Obtaining a duplicate birth certificate or passport can take months and involve costs that can be difficult for low-income families to absorb:  it can cost $5 to $23 to get a birth certificate, depending on the state, while a passport costs $87 to $97 and now entails extended waits.  Moreover, under the citizenship documentation requirement, both citizenship and identity documents must be originals or copies certified by the issuing agency.  This can pose barriers to some parents even when they have the documents in hand; putting the originals of such documents in the mail can be risky, and low-income working parents may have difficulty taking time off from work to visit a Medicaid office.

Requirement Has Led to Significant Enrollment Drop in All Three States 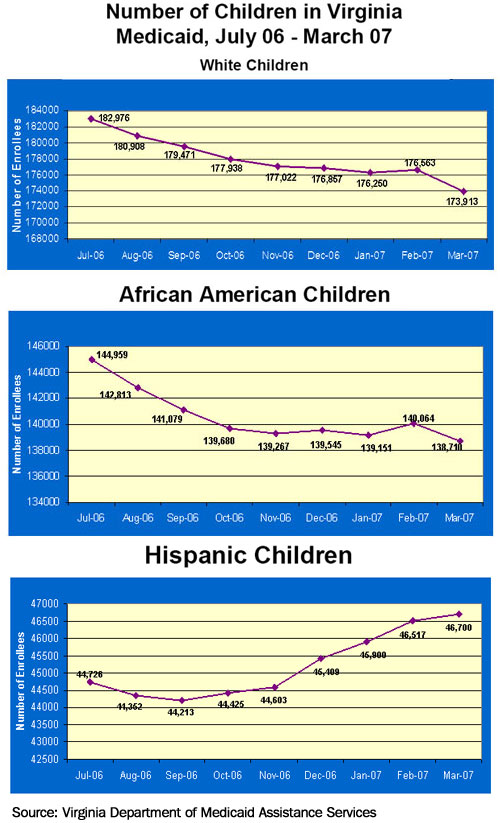 By delaying, denying, or terminating Medicaid coverage for eligible citizen children, the documentation requirement is preventing these children from receiving essential health services.  For example, the Virginia Health Care Foundation, in partnership with the state, recently surveyed 800 Virginia families whose children’s Medicaid coverage was delayed while they attempted to obtain the needed documents.  The survey found that many families were unable to secure health care for their children while they remained uninsured.

Regulations Do Not Substantially Reduce Problems Many Citizens Are Encountering

On July 2, the Centers for Medicare and Medicaid Services at the Department of Health and Human Services issued final regulations for the citizenship documentation requirement.  The regulations largely codify the earlier CMS guidance that states have been using to implement the requirement.  The regulations include a few improvements that may facilitate compliance with the requirement for some applicants and beneficiaries.  These improvements, however, are narrowly drawn and affect only a small fraction of citizens applying for or receiving Medicaid.  For most citizens, the rules remain essentially the same.

In particular, one group that should be helped somewhat by modifications in the final regulations are naturalized citizens.  Their citizenship status will now be able to be verified through a match with a Department of Homeland Security database, avoiding a need to produce an original certificate of naturalization.  This and smaller changes focused on naturalized citizens will have no impact on native-born Americans.

Procedures are also eased somewhat for 16- and 17-year old children; the regulations allow 16- and 17-year olds who cannot produce a school ID with a photo or a driver’s license to produce an affidavit signed by their parent or guardian attesting to their identity.  (They would still need to prove citizenship.)  Such affidavits also would be permitted for individuals with disabilities who reside in residential care facilities.

In another modification, the regulations add “early school” or religious records to the limited list of documents that can be used to prove citizenship in cases where a state concludes that a passport or birth certificate cannot be obtained in 45 days.  Many or most school and religious records, however, would not be allowed.  To be acceptable, early school records must include, among other things, “… a U.S. place of birth and the name(s) and place(s) of birth of the applicant’s parents” (emphasis added).  School records generally do not contain parents’ places of birth.  Also, religious records will be accepted only if they are made within three months of a child’s birth, include the child’s place of birth (as well as other information), and are officially recorded by the religious organization.  Many baptismal certificates do not include place of birth.

For the most part, the new regulations do not address the fundamental problems that are causing substantial numbers of eligible citizens to have their health insurance denied, delayed, or terminated as a result of the citizenship documentation requirement.  For example, applicants who satisfy all other eligibility requirements will continue to be denied coverage until they are able to produce acceptable documents to prove their citizenship and identity.  They will not be covered while awaiting receipt of these documents.[1]

The regulations also continue to insist that originals of birth certificates, passports and identity documents be provided, except for copies that have been officially certified by the issuing agency.  This effectively prevents individuals from providing documents by mail, fax or electronically, and necessitates additional visits to Medicaid offices.  That can pose problems for working-poor parents who are not permitted to leave their jobs or must forfeit pay when they do so, as well as for people who lack access to transportation, especially in rural areas.

Finally, while infants born in the United States to a mother enrolled in Medicaid are automatically eligible for Medicaid coverage for one year, the regulations require the parents of these infants to prove the children’s citizenship at their first birthday in order for Medicaid coverage to continue.  Even though such children are citizens under the Constitution since they were born in the United States, HHS is continuing to require families to separately produce proof of citizenship and to direct that these infants be removed from the program if that is not accomplished.

[1]Those states that have adopted the “presumptive eligibility” option may provide coverage for an interim period while the documents are being obtained, but only a limited number of states have adopted this option.  (The option also applies only to certain populations rather than to all applicants.)

Children in need of medical attention can suffer harm if they are unable to get their health problems addressed.  In the Virginia study, 41 percent of the families were not able to get all the health care their children needed while they were waiting for their coverage to be approved. Almost half (47 percent) of the young children ages 0 to 24 months who needed immunizations were unable to get them.  In addition, 41 percent were unable to get needed dental care, 24 percent could not obtain medical care for an illness, and 17 percent could not fill a needed prescription.[11]

The new data from Alabama, Kansas, and Virginia are the latest evidence that large numbers of U.S. citizens who are eligible for Medicaid — most of them children — are having their coverage delayed, denied, or terminated as a result of the citizenship documentation requirement.  This is preventing substantial numbers of families from obtaining needed health care for their children.  At a time when policymakers are considering how to reach more low-income children who are eligible for publicly funded coverage but remain uninsured, this requirement — which evidently is having a counter-productive effect — ought to be reconsidered.

[1] Certain legal immigrants can be eligible for Medicaid; individuals who entered the U.S. as legal permanent residents on or after August 22, 1996 must have resided here for five years before they can qualify.  Under a longstanding Medicaid rule, legal immigrants are required to provide documents proving they are in an eligible legal immigrant category.  As HHS has noted, the citizenship documentation requirement enacted in 2006 does not apply to legal immigrants.

[5] Some 13 percent are from Asia, and 9 percent are from Europe, Africa, and other areas.  Jeff Passel, “The Size and Characteristics of the Unauthorized Migrant Population in the United States,” Pew Hispanic Center, March 2006.

Tax Credits for Individuals and Families