Data from the U.S. Census Bureau indicate that the ranks of uninsured Americans have grown substantially since 2000. It is less commonly known, however, that the number of those uninsured would have been millions higher had it not been for enrollment growth in Medicaid and its sister program, the State Children’s Health Insurance Program (SCHIP). In response to the twin challenges of an economic downturn and a sharp drop-off in private health insurance, Medicaid and SCHIP covered more people and helped them maintain health insurance coverage.

Census data reveal that there were 5.1 million more uninsured people in 2003, the most recent year for which Census data are available, than in 2000. Two-thirds of the insurance loss occurred among low-income people, those whose incomes were less than twice the poverty line (about $31,260 for a family of three in 2004). Reductions in employer-sponsored health insurance coverage — which affected members of low-income working families more severely — were the main reason for the increase in the number of uninsured. These difficulties were compounded by an almost seven million person increase in the number of Americans with low-incomes between 2000 and 2003.

These enrollment increases occurred while state revenues were falling and states were experiencing serious budget deficits. Because Medicaid is designed as a safety net entitlement program, federal matching funds automatically grew to match rising state expenditures. An additional factor that helped sustain Medicaid enrollment during these difficult times was the provision of $10 billion in temporary federal fiscal relief for state Medicaid programs in 2003 and 2004, which helped states avoid Medicaid cutbacks.

The gains in children’s health insurance coverage are part of a longer story that began in 1997 when the SCHIP program was enacted with a mission to reduce the number of uninsured low-income children. SCHIP enrollment grew actively through 2002 and has been extremely successful in reducing the number of low-income uninsured children. By late 2003, however, enrollment growth in SCHIP stalled. While there have been sufficient federal funds in state SCHIP grants to date, looming shortfalls in federal SCHIP funding levels will soon affect a number of states. As a result, states could be forced to insure hundreds of thousands fewer children by 2007.

The number of uninsured Americans would have been substantially higher had it not been for the responsiveness of Medicaid and SCHIP during the economic downturn. Potential changes in these programs that would limit their responsiveness, such as creation of a federal budget cap on entitlement funding, conversion of Medicaid to a block grant or otherwise capping federal Medicaid funding, or insufficient federal funding for the SCHIP program, would make it far more difficult for these programs to meet the needs of low-income uninsured Americans in the future and would almost certainly lead to further increases in the number of people without health insurance coverage.

Between 2000 and 2003, the number of non-elderly Americans without health insurance rose by 5.1 million. [1] Two-thirds of the growth in the ranks of the uninsured — 3.5 million of the 5.1 million uninsured — occurred among those in low-income families, as seen in Figure 1. 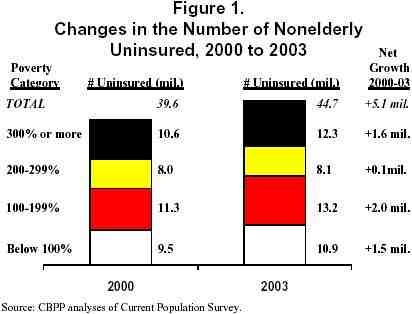 The main reason for the reduction in insurance coverage was the loss of employer-sponsored insurance for workers and their dependents. In part, this occurred because rising unemployment during the 2000-3 period deprived many of access to job-based health insurance. More important, rising health costs led many employers to increase the amounts that workers must pay out-of-pocket through monthly premiums, as well as deductibles and copayments. These rising costs made it harder for workers to afford health insurance for themselves and their dependents. Some firms, especially small businesses, stopped offering health insurance coverage because of rising costs. Finally, changes in the nation’s employment patterns led many workers to the types of jobs that are less likely to offer health insurance (e.g., part-time or temporary work, self-employment, service sector jobs, etc.). [2]

As seen in Table 1, the loss of employer-sponsored insurance coverage was more precipitous for low-income workers. Between 2000 and 2003, the share of adults in working families who had employer-sponsored coverage fell by about one-seventh (14 percent) among those with incomes below the poverty line and by about one-ninth (11 percent) for those with incomes between 100 percent and 200 percent of the poverty line. Losses occurred among higher-income worker, as well, but the reductions were significantly smaller — less than half as much as for low-income workers.

Finally, the impact of the loss of employer-sponsored coverage among low-income populations was compounded by the fact that the number of people with low incomes rose from 2000 to 2003. The number of nonelderly people with incomes below 200 percent of the poverty line rose from 69.3 million in 2000 to 75.9 million in 2003, an increase of almost seven million, while the number with incomes greater than 200 percent of poverty grew by only one million.

Medicaid and SCHIP Reduced the Number of Uninsured

Medicaid and SCHIP grew to help offset the loss of private health insurance. Both programs are designed as safety net programs for low-income people, including children, families, senior citizens and those with permanent disabilities. Because the number of people covered by these public programs grew, the number of uninsured Americans did not rise as quickly as it would have. Overall, the proportion of nonelderly Americans with employer-sponsored insurance coverage fell by 3.9 percentage points from 2000 to 2003, while the proportion covered by Medicaid or SCHIP rose 2.1 percentage points. 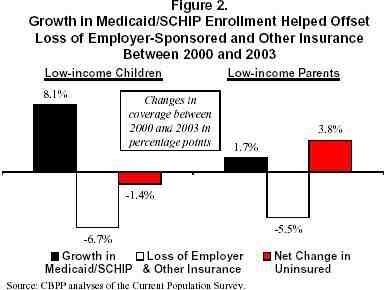 Census data indicate that the number of nonelderly people covered by Medicaid or SCHIP rose by 6.3 million from 2000 to 2003. [3] Had Medicaid and SCHIP enrollment not grown, the number of people who are uninsured would have been millions higher in 2003.

Medicaid’s entitlement structure ensured that it caught many people, especially children, who fell through cracks in the system of employer-based health coverage, providing coverage to newly uninsured low-income people. Medicaid enrollment in the 2000-03 period rose primarily because of increased need. Very few states adopted even modest eligibility expansions during this time period, and a majority of states adopted policies to hold down Medicaid or SCHIP enrollment.[6] But, as poverty deepened and unemployment rose, more people became eligible for assistance. In addition, the loss of employer-sponsored health insurance coverage and the rising costs of health care stimulated the demand for Medicaid coverage among low-income families. An additional factor was that that a number of states began in the late 1990s to simplify enrollment procedures for children in Medicaid in order to parallel efforts in their SCHIP programs so that eligible families could more readily enroll or stay enrolled.

The Medicaid enrollment increases that protected insurance coverage for millions of people during this period also increased Medicaid expenditures during a time when states’ revenues were falling short. Protecting insurance coverage for millions of low-income children and adults contributed to the growth in Medicaid expenditures, although a substantial share was also due to rising per capita health care costs, such as the rising costs of prescription drugs or hospital care.[7] Fortunately, Medicaid’s design as an entitlement program meant additional federal funds were automatically available to match rising state expenditures during the economic downturn. Even so, states were forced to initiate an unprecedented array of budget cuts and cost containment measures to help scale back Medicaid expenditures.[8] The pressure on states was also eased by the provision of $10 billion in temporary federal Medicaid funding that Congress approved to bolster state Medicaid programs in 2003 and early 2004; this helped states maintain Medicaid coverage during a time when state budgets were pinched.

In the past, there have been a number of proposals to cap federal Medicaid funding. Such a limitation on federal funds would shift financial risks and burdens from the federal government to states and to those with low incomes, because rising needs at state levels would not automatically trigger additional federal matching funds. This could force states either to shoulder the extra costs solely with state funds or to make additional cutbacks in their Medicaid programs due to the restrictions in federal funding. Because many states would not have had the additional fiscal resources to shoulder additional state costs, they would have been forced to cut back on Medicaid coverage, resulting in a potentially significant increase in the number of uninsured Americans.

However, SCHIP enrollment has stalled and may fall in coming years. SCHIP enrollment stopped growing in the second half of 2003, in large measure because of cutbacks in a handful of states, particularly Texas, triggered by concerns about state budget deficits. [10] The ability of SCHIP to maintain or to continue to expand children’s insurance coverage is further clouded by difficulties associated with SCHIP’s status as a federal block grant program with a limited amount of federal funding. A growing number of states are hitting the limits of their federal SCHIP grant funding and could be forced to cut SCHIP enrollment in the coming years.[11] The recent expiration of $1.3 billion in federal SCHIP funds and the reversion of these funds to the Treasury means that a substantial amount of resources has been lost from the SCHIP system. Projections show that hundreds of thousands fewer children will be served through SCHIP by 2007. As a result, the number of children without health insurance coverage could begin to rise again.

In recent years, the nation faced a number of economic challenges and an increase in the number of people without health insurance was one sign of these difficulties. Maintaining health care coverage was a particular problem because health care costs surged at the same time that the size of the low-income population was growing. Employer-sponsored insurance coverage fell, particularly affecting those with low incomes. The ability of Medicaid and SCHIP to help fill gaps left by private insurance and rising poverty was critical.

Had it not been for the responsiveness of Medicaid and SCHIP, millions more low-income Americans would be uninsured today. Some are now calling for the imposition of substantial federal budget cuts in Medicaid and/or the capping of federal Medicaid funding for states. Rather than considering proposals to weaken these programs through budget cuts or funding caps, the federal government could be considering how to strengthen its commitment to reducing the number of uninsured low-income Americans through Medicaid and SCHIP. The nation should continue to make progress in providing insurance coverage to low-income children and more could shore up coverage for the income parents of these children and other low-income adults. To make such progress, states will need continued financial support and partnership from the federal government, not a shirking of federal responsibilities.

[1] We focus on nonelderly people since almost no Americans 65 or older are uninsured because of the universal nature of the Medicare program for senior citizens.

[4] Because people may have more than one type of insurance during a year, we assign those with multiple types of insurance into one, using Medicaid and employer-sponsored insurance as the highest ranking categories in the hierarchy.

Beneath the Surface: Barriers Threaten to Slow Progress on Expanding Health Coverage of Children and Families
, Kaiser Commission on Medicaid and the Uninsured, Oct. 2004.

[6] Leighton Ku and Sashi Nimalendran, “Losing Out: States Are Cutting 1.2 to 1.6 Million Low-Income People from Medicaid, SCHIP and Other State Health Insurance Programs,” Center on Budget and Policy Priorities, Dec. 22, 2003.