The economic recovery package that the House passed on January 28 would establish a temporary option for states to provide Medicaid coverage to certain workers (and their families) who have become unemployed during this recession.  This provision, which is not in the Senate package, would help address a problem many parents face when they become unemployed.  In most states, Medicaid’s income eligibility limits for jobless parents are extremely low; a family’s income must sink well below the poverty line — to less than half the poverty line in 29 states — before a parent can qualify.[1]  The House measure would help address this problem on a temporary basis through 2010.

The House and Senate packages also would reduce the cost of COBRA health coverage for unemployed workers.  While that measure would help some workers, it is no substitute for the House Medicaid provision, since most low-income workers are not eligible for COBRA and many who are eligible could not afford it even with the assistance in the House and Senate bills.

Medicaid Eligibility Much More Restrictive for Parents Than for Children

In most states, parents seeking health coverage through Medicaid — especially those who lose their jobs — are at a serious disadvantage compared to their children.  For children, the median income eligibility level for Medicaid or the State Children’s

In individual states, Medicaid income eligibility for jobless parents ranges from 275 percent of the poverty line in Minnesota down to 11 percent of the poverty line in Alabama.  (See Figure 2.) And in most states, unemployed adult workers who have no children and are not disabled are ineligible for Medicaid regardless of how little income they have.[2]

Similarly, state Medicaid policies regarding the treatment of family assets are much more restrictive for parents than for children.  Forty-six states disregard the value of family assets when determining a child’s eligibility for Medicaid or SCHIP; only 23 states do so when determining a parent’s eligibility.  Because of Medicaid’s low asset limit — in most states that count assets, families with assets worth $3,250 or more are ineligible for Medicaid — many parents whose incomes are low enough to qualify for the program must choose between draining their savings in order to receive Medicaid or retaining their savings and doing without health coverage.[3]

Current Rules Deny Coverage to Many Parents Who Become Unemployed

The extremely restrictive eligibility rules for unemployed parents in most states create serious barriers for families in which a parent loses health insurance as a result of a job layoff.  While children in such families are likely to be able to enroll in Medicaid or SCHIP quickly, parents will not be able to qualify for coverage until the family income drops to a level that places the entire family at serious risk.

Even the modest unemployment insurance payments that many jobless families receive are often enough to put them over their state’s income eligibility level for Medicaid.  States help working parents qualify for Medicaid by disregarding a portion of their income meant to help cover work-related expenses.  But states do not disregard a portion of unemployment insurance benefits, which are considered “unearned income.”  Unemployed parents often cannot become eligible for Medicaid until their unemployment benefits run out and they fall into deep poverty.

When jobless parents become uninsured, their health can be placed at risk and their families may be financially exposed.  They may be compelled to choose between paying for a doctor’s visit or necessary medication and keeping up with their rent or mortgage.  Nearly one-quarter of uninsured adults say they have forgone health care in the past year because of its cost, compared to just 3 percent of adults with private coverage, according to the Kaiser Commission on Medicaid and the Uninsured.  Similarly, one-quarter of uninsured adults say that within the past year they did not fill a drug prescription that their doctor had given them because they could not afford it.[4]

Serious illness or injury can send uninsured families into severe debt.  More than one-third (34 percent) of those who were uninsured at the time they were surveyed reported debt of $4,000 or more, and 20 percent reported debt of $8,000 or more, according to a Commonwealth Fund study.[5]  For uninsured parents with debilitating medical conditions, the inability to address their health needs could make it harder to secure employment when the economy recovers.

How the House Measure Would Work

To help address the above problems and limit the number of Americans who become uninsured as a result of the current recession, the House recovery legislation would allow states to provide Medicaid coverage to certain groups of workers who involuntarily lose their jobs between September 1, 2008 and December 31, 2010 and who would not otherwise qualify for Medicaid.  Eligible workers include those receiving unemployment benefits (as well as those who have exhausted such benefits), other unemployed workers with incomes up to 200 percent of the poverty line (though states could set income eligibility at a lower level), and unemployed workers receiving food stamps.  The option would be 100 percent federally funded (including related administrative costs) and would cost $10.8 billion over five years.

The House recovery package and the package approved by the Senate Finance Committee both include a provision to subsidize COBRA coverage for unemployed workers.  Under COBRA, workers who lose their jobs may generally retain their employer-sponsored health coverage for up to 18 months.  Workers, however, must pay 102 percent of the entire premium cost (both the employer and employee shares).

The House provision would subsidize 65 percent of the premium cost for COBRA enrollees for up to 12 months, or until they secured other health coverage.[6]  The Senate legislation, as modified by an amendment from Senators Ben Nelson (D-NV) and Susan Collins (R-ME) provides a 50 percent subsidy for 12 months of coverage.

These subsidies would help some unemployed families obtain coverage.  But many more families would be left behind.

One reason is cost.  Historically, participation rates among those eligible for COBRA are quite low — only 3 percent of unemployed low-income workers participated in COBRA in 2006[7] — and survey results identify cost as the most significant barrier to enrollment.[8]  Unemployed workers electing COBRA coverage would face average annual premium costs of $4,704 for an individual and $12,680 for a family plan (based on average employer plan costs in 2008), well above what a typical low-income worker could afford.[9]

An even larger concern is that the great majority of low-income workers are not eligible for COBRA.  COBRA coverage is available only to workers if their former employer continues to offer health insurance, does not go out of business, and has at least 20 employees.

Only 38 percent of currently employed workers with incomes below twice the poverty line are COBRA-eligible, according to the Commonwealth Fund.  Another 33 percent are ineligible because they are uninsured — likely because their employer does not offer coverage or they cannot afford job-based coverage.  (See Figure 4.)  Those ineligible for COBRA are disproportionately in fair or poor health, and Hispanic.[11] 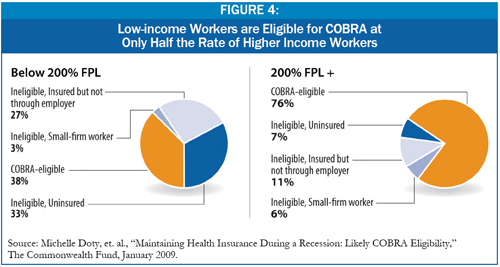 In short, many low-income unemployed workers would not benefit from the COBRA provisions in the House and Senate packages because they are not eligible for, or cannot afford, coverage through COBRA.

In contrast, most low-income unemployed workers without health coverage could benefit from the House Medicaid provision.  Not only would it enable states to provide them with comprehensive coverage through Medicaid, but because Medicaid generally does not charge premiums and requires only small co-payments, that coverage would be affordable to these low-income unemployed workers.

[1] Donna Cohen Ross and Caryn Marks, “Challenges of Providing Health Coverage for Children and Parents in a Recession,” Center on Budget and Policy Priorities for the Kaiser Commission on Medicaid and the Uninsured, January 2009.

[2] The House Medicaid provision would permit any unemployed worker who otherwise meets the eligibility criteria of the option to qualify, including adults without children.

[6] In addition, unemployed workers either aged 55 or older, or tenured with their former employer for ten or more years, would be eligible for COBRA until they are eligible for Medicare.

Tax Credits for Individuals and Families