People in 34 states[1] who enrolled in health coverage for 2014 through the Federally Facilitated Marketplace (FFM) will be automatically re-enrolled in the same plan in 2015 unless they choose a new plan through the FFM during the open enrollment season, which began November 15 (see Figure 1).[2]  While auto-renewal is an important backstop to avoid loss of coverage, it could leave many people paying more for health care than the Affordable Care Act envisions — and more than they will pay if they go back to the Marketplace.

Unless people provide updated information and have their eligibility re-determined, most who received subsidies for marketplace coverage in 2014 will automatically receive the same dollar level of subsidies in 2015.  (These subsidies consist of advance payments of premium tax credits, which are paid to insurers on enrollees’ behalf to help cover the enrollees’ premiums.) But since many factors that affect the level of people’s subsidies change from year to year, a high percentage of people who auto-renew will receive advance premium credits that turn out to be too low or too high.  To avert such problems, consumers need to return to the FFM (rather than auto-renewing) to receive an updated eligibility determination.  That is the only way to ensure they receive the correct level of benefits.

Millions of people who enrolled in 2014 coverage through the FFM received advance premium tax credits.  A household’s credit amount is the difference between the household’s expected premium contribution (based on its income) and the cost of the benchmark health plan, which is the second-lowest-cost “silver” plan in the Marketplace that serves the area. 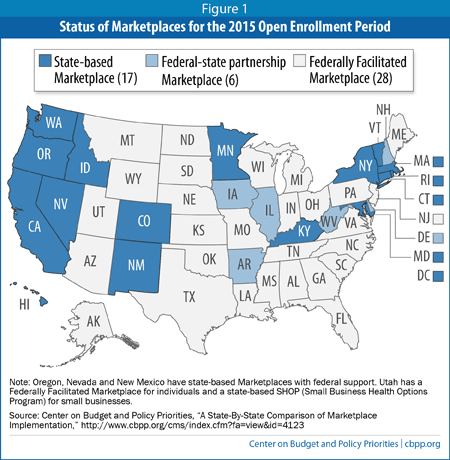 For example, on average nationally, a 24-year-old with income at 150 percent of the poverty line would have an expected contribution of $57 per month in 2014 and receive a monthly premium credit of $154 — the difference between his or her expected contribution and the $211 monthly cost of the average benchmark plan.  If the individual purchased a modestly more expensive silver plan, at $225 per month, the premium credit would cover less of the cost of coverage, and the individual’s out-of-pocket premium costs would rise to $71 per month.  If he or she chose a less expensive bronze plan costing $175, the premium credit would cover a larger share of the coverage costs, and the individual’s out-of-pocket premium costs would drop to $21.

How the FFM Renewal Process Will Work for 2015

The factors affecting a household’s eligibility for and the amount of its premium credit change from year to year, as explained below.  But for the current open enrollment period, in which people who signed up for Marketplace coverage in 2014 will renew coverage for the first time, the Department of Health and Human Services (HHS) is not requiring FFM enrollees to complete a new application or return to the FFM to keep their coverage.

In general, if a current enrollee does not take action, the FFM will assume that he or she is eligible for the same advance premium tax credits and cost-sharing reductions in 2015 as they received in 2014.  In addition, the Marketplace will automatically re-enroll them in the same health plan that they chose in 2014.  If an enrollee’s 2014 plan is no longer available, his or her insurer must enroll the enrollee in another plan that is as similar as possible to his or her 2014 plan.

The FFM has sent out notices about open enrollment, which describe the open enrollment period, the renewal process, the need to report changes in personal information, and the need to reconcile the advance payments of the premium tax credit when filing one’s tax return.  The notices also encourage consumers to return to the Marketplace to provide updated information, receive an updated eligibility determination, and review their plan selection for 2015.

Most of the notices indicate that the FFM will auto-renew consumers at their 2014 levels of advance premium tax credits and cost-sharing reductions if they don’t take action.  A small number of enrollees — those who did not authorize the FFM to access their 2013 tax-return information and those whose 2013 tax information shows income above 500 percent of the poverty line — are being notified that unless they take action to renew coverage, the FFM will discontinue their advance premium tax credits and cost-sharing reductions for 2015.

Factors Affecting Subsidies Likely to Change from Year to Year

The factors affecting an individual’s premium credit and cost-sharing subsidies can change each year, even for households with stable incomes.  Auto-renewing will not take account of these changes.  The factors include the following.

A household is expected to contribute a certain share of its income to premiums; households with more income pay a larger share (see Table 1).  Income is measured as a percentage of the poverty line.

Even households whose income changes little if any in dollar terms can see changes in the subsidies for which they are eligible.  The poverty line is adjusted annually for inflation (see Table 2), so someone who expects to have the same dollar income in 2015 as in 2014 will see his or her income fall slightly as a percentage of the poverty line.  When the Marketplace auto-renews coverage, however, it will not do a new calculation, but simply provide the same amount of advance premium tax credits as the household received in 2014.  This means that households that auto-renew and whose income remains unchanged in dollar terms will receive somewhat smaller advance premium credits in 2015 than they are eligible for, because their income will have declined slightly as a percentage of the poverty line.

Due to increased competition in the Marketplaces, the plans that were the lowest-cost offerings in their area in 2014 likely won’t be the lowest-cost plans in the area in 2015, according to a Kaiser Family Foundation analysis of rate filings in 15 states.[3]  More insurers are entering the Marketplace and offering lower-cost plans.  Consequently, many people who chose low-cost plans in 2014 may find that those plans are no longer a low-cost option (comparatively speaking) in 2015.

For example, in Richmond, Virginia, the second-lowest-cost silver plan in 2014 was Anthem DirectAccess.  The cost to a single 40-year-old individual (before any premium credits) was $253 per month in 2014 and will rise to $280 per month in 2015.  But this will no longer be the benchmark plan in 2015.  Bon Secours, with a premium of $260 per month, will replace Anthem DirectAccess as the benchmark plan.

To illustrate the impact of these dynamics, consider a 40-year-old non-smoker who lives in Richmond and makes $28,000 per year.  If she enrolled in Anthem DirectAccess in 2014, she would have received a premium credit of $70 per month, reducing her monthly out-of-pocket premium cost from $253 to $183.  If she auto-enrolls in the same plan for 2015, with the same advance premium credit of $70 per month that she received in 2014, her monthly out-of-pocket premium cost will rise by nearly 15 percent, from $183 to $210.  If she updates her information, however, her new eligibility determination will make clear that her out-of-pocket premium costs will rise if she stays in the same plan but fall a bit if she shops around and purchases the new, less expensive benchmark plan (see Figure 2).

3. Changes in Coverage Cost, Including the Effects of Age Rating

Insurance premiums rarely stay the same from year to year, and premiums for nearly all plans in the FFM will likely rise or fall in 2015.  Moreover, as enrollees get older, they can be charged higher premiums based on their age.

Under the Affordable Care Act, insurers in the individual market may vary premiums by age by ratios that the law sets forth.  Most enrollees’ premiums will rise as they turn a year older; for most people, this year-to-year change will be small.  However, 21-year-olds will see a 58-percent increase in 2015 in the premiums they are charged before tax credits, as a result of the change in their age; that’s because the age-rating factor used to compute premiums jumps substantially when an individual turns 21.  For example, a 20-year-old whose premium (before tax credits) was $130 per month in 2014 will (based on national average data) see his or her premium rise to $205 per month in 2015, solely due to turning 21.

The premium tax credits compensate for such increases; they take age rating into account and avoid these big premium increases for most people turning 21 — if those individuals go back to the Marketplace.  People who auto-renew for 2015, however, will receive the same advance premium tax credit amount as in 2014, so their advance tax credits will not offset the large premium increase that will result from their turning 21.

As a result, auto-renewal will work badly for people who turn 21 in 2014.  Their 2015 advance premium tax credits will be based on the lower premiums they were charged in 2014 as children, rather than on the higher premiums they will now face as adults.

Thus, a 20-year-old who had income of $17,235 (150 percent of the poverty line) in 2014 would pay $57 per month out of pocket in 2014 for the benchmark plan (based on national average data).  If he or she returned to the FFM to update his or her eligibility for 2015 and remained in the same plan — and the plan retained its status as the benchmark plan — the individual would pay $56 a month toward his or her premiums in 2015.  But if the individual is auto-enrolled, his or her monthly out-of-pocket premium payments will nearly double — from $57 to $112.  (To be sure, the individual would be able to recoup the difference when he or she filed a tax return for 2015, but that won’t occur until early 2016.  In the meantime, this individual might have difficulty affording the premiums.)

The number of people who could be affected is substantial.  Some 2.25 million people who selected a Marketplace plan through March 2014 were between the ages of 18 and 34.  Assuming an equal distribution of ages in this group, about 132,000 of these people will have turned 21 during 2014 and consequently face a big jump in premiums (before tax credits) in 2015.  And, since some of these people are part of coverage units that also include other family members, the total number of people affected will be considerably larger.  It’s particularly important for these people to return to the Marketplace and update their eligibility.

Automatic renewal of coverage for people who don’t return to the FFM to update their eligibility and plan selection is an important backstop to avoid loss of coverage.  But the best course for current enrolleesisto return to the FFM rather than to auto-renew into their current plan at their 2014 premium tax credit level.

HHS, navigators, insurers, and others who are assisting people with the eligibility and enrollment process should encourage enrollees to return to the FFM in order to provide updated information, have their premium credit eligibility for 2015 re-determined, and review their plan selection.  Not taking such steps during open enrollment — and simply auto-renewing instead — will mean significantly higher premiums for many consumers in 2015.

[1] These 34 states include the six states with a federal-state partnership Marketplace (see Figure 1).

[2] The FFM will only apply this process to renewals conducted during the 2014 open enrollment period.  For future years, the Department of Health and Human Services (HHS) may specify a different procedure for the FFM.  In addition, state-based Marketplaces have the option of adopting the FFM process or seeking HHS approval to implement an alternative process.