The House-passed budget would convert Medicare to a "premium support" voucher to purchase private health insurance or traditional Medicare.[1]   Some supporters of premium support — most notably House Budget Committee Chairman Paul Ryan, who designed the House proposal — claim that reliance on private insurers would lower Medicare costs.  As evidence, they cite the fact that the Medicare Part D drug benefit, which took effect in 2006, has cost less than predicted when Congress enacted it.  They attribute this lower spending to efficiencies produced by competition among the private insurers that deliver the drug benefit.[2]

Analysis indicates, however, that reliance on private plans to deliver the Medicare drug benefit had little or nothing to do with Part D's lower-than-expected spending.  The two primary factors that drove the reduction in Medicare Part D spending (relative to the earlier cost estimates) were lower-than-expected program enrollment and the sharp decline in spending growth for prescription drugs throughout the U.S. health system.  A recent analysis issued by the Kaiser Family Foundation reaches similar conclusions.[3]

This analysis expands on earlier work we have conducted on this matter[4] and finds:

Why Were Medicare Part D Costs Lower Than Projected?

Supporters of converting Medicare into a premium support system cite this fact as evidence that private plans lower costs.  But careful analysis of the factors contributing to lower-than-expected Part D costs yields a far different result.

Enrollment in the Medicare drug benefit was substantially lower than the Medicare trustees and CBO had originally estimated.[9]   In early 2004, the trustees expected that average Medicare Part D enrollment over its first five years (2006-2010) would be 42.1 million.[10]   The actual figure was 10.6 million (or 25 percent) lower (see Figure 3).  This lower-than-expected enrollment accounted for 51 percent of the difference between actual costs and the costs that the trustees originally projected (see Figure 1).

Similarly, when Congress enacted the drug benefit in late 2003, CBO estimated that average Part D enrollment between 2006 and 2010 would be approximately 38.4 million.  Actual average enrollment was 31.3 million.[11]   Lower-than-expected enrollment accounted for 57 percent of the difference between Part D's actual costs and CBO's original cost projections.

Lower per-beneficiary costs account for the rest of the difference between Part D's actual and projected costs.  Both the Medicare trustees and CBO assumed significantly higher Part D costs per beneficiary than actually occurred.  For example, in fiscal year 2010, net federal Part D costs per beneficiary were 22 percent lower than the Medicare trustees originally projected (see Figure 3)[12] and 16 percent lower than CBO had projected.[13]

Arguably, the use of private plans could help explain why per-beneficiary costs were lower than expected.  That ignores, however, the sharp decline in growth in spending for prescription drugs throughout the U.S. health care system.

In the late 1990s and early 2000s, prescription drug spending grew rapidly, reflecting the availability of new "blockbuster" drugs, rising prices for existing drugs, and greater utilization by beneficiaries.[14]   When Congress enacted the Medicare drug benefit, these trends were expected to continue.  For example, in 2004, the National Health Expenditure projections assumed that per-capita retail drug spending would grow by around 10 percent annually between 2006 and 2010; the Medicare trustees incorporated these expected growth rates into their Part D cost estimates.

Drug spending growth, however, began to moderate unexpectedly and then slowed more significantly around the time that the Medicare prescription drug benefit took effect in 2006.  This slowdown resulted from developments such as major drugs going off-patent, fewer new blockbuster drugs coming to market, and much greater usage of lower-cost generic drugs, as the CMS actuaries, the Kaiser Family Foundation, and others have explained.[15]   Indeed, overall drug spending per capita grew an average of only 2.8 percent a year between 2006 and 2010.  Overall retail drug spending per capita in 2010 was 35.3 percent lower than had been projected in 2004.[16]

As the Medicare trustees and the Kaiser Family Foundation have noted, these system-wide drug cost trends have been key factors in reducing Medicare Part D spending below original projections.[17]   Private industry analysts have produced similar findings.  The IMS Institute for Healthcare Informatics found that the cost of the average daily treatment of the ten therapeutic drug classes most used by Part D beneficiaries in 2006 declined from $1.50 in January 2006 to $1.00 by December 2010, a reduction of one-third in nominal terms (and an even larger reduction in inflation-adjusted terms).  Eight of the ten therapeutic classes experienced price declines.  Expiring patents and the resulting substitution of lower-cost generic drugs for brand-name versions played a major role in these lower prices.  (The two therapeutic classes that had price increases either had no major expiring patents or a major patent expiration that did not occur until 2010.)[18]    As Figure 4 shows, the annual percentage difference between actual Part D costs per beneficiary and the original projections broadly reflects the reductions in system-wide per-capita costs relative to 2004 projections.

Nevertheless, some supporters of premium support have argued that without private plans, Medicare Part D would not have benefited from these system-wide trends.  For example, one report argued that private Part D plans have been especially successful at encouraging the use of generic drugs.[19]   Yet, the use of generic drugs among Part D plans appears to have been no different than the rates of generic utilization in state Medicaid programs during the early years of the drug benefit.[20]   Another analysis claimed that Part D was more successful at slowing prescription drug cost growth than the overall U.S. health care system, but the analysis ignored the effects of lower enrollment on the lower-than-expected Part D costs.[21]  Net Part D costs per beneficiary actually grew significantly faster than overall prescription drug spending per capita between 2006 and 2010, according to National Health Expenditures data.  Moreover, the Kaiser Family Foundation study notes that Medicare beneficiaries do not appear to choose plans that minimize their out-of-pocket costs or to switch plans when charged higher-than-average annual premium increases, due largely to the difficulties that beneficiaries face in making informed choices among plans.  That reduces the incentives for private plans to lower costs.[22] 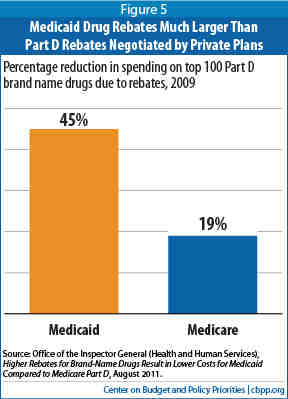 The reductions in net Part D per-beneficiary spending between 2006 and 2010, relative to original projections, tend to be somewhat smaller than the reductions in per-beneficiary costs system-wide (see Figure 4).[23]   As a result, there is little evidence that using private plans to deliver Medicare drug coverage played a significant role in producing lower-than-expected costs per beneficiary, as the trend can be largely explained by slower growth of pharmaceutical costs throughout the health care system.

Moreover, evidence indicates that the use of private plans to deliver the Medicare drug benefit actually increased Part D costs because private plans have done a comparatively poor job of negotiating rebates from drug manufacturers.  Prior to the creation of Part D, "dual eligibles" (people enrolled in both Medicare and Medicaid) received drug coverage through Medicaid, which requires drug manufacturers to provide certain rebates to state Medicaid programs for the drugs they purchase.  When Congress enacted the Medicare drug benefit, it assumed that the private insurance companies participating in Part D would negotiate larger discounts from drug manufacturers than those that Medicaid requires.[24]

In reality, however, research shows that the private insurers offering Part D coverage get significantly smaller rebates than Medicaid does for the same drugs.  For example, in 2009, for the top 100 brand-name drugs with the highest total Part D costs, Medicaid drug rebates were three times larger on a per-unit basis than the median rebate negotiated by private Part D plans, according to the HHS Office of Inspector General.  As a result, the Medicaid cost per drug (net of rebates) was lower than the net Medicare cost for all but seven of these 100 drugs.

Overall, the rebates that Medicaid obtained in 2009 reduced Medicaid spending for these drugs by 45 percent, while the rebates obtained by Medicare Part D plans reduced Medicare costs by just 19 percent (see Figure 5).[25] Medicare thus pays substantially more than Medicaid does for the same drugs, which results not only in higher program costs but also in higher Part D premiums for beneficiaries (and larger profits for drug manufacturers).

Requiring that Part D get the same rebates as Medicaid does just for drugs that Part D covers for low-income Medicare beneficiaries (the large majority of whom are dual eligibles), as the Obama Administration has proposed in its fiscal year 2013 budget, would reduce Part D costs by $137 billion over the next ten years, according to CBO.[26]   Requiring Medicaid-level rebates for all Part D beneficiaries would produce even greater savings.

Claims that the use of competing private plans in Medicare Part D accounts for lower-than-anticipated federal costs for the Medicare drug benefit do not withstand scrutiny.  As the Kaiser Family Foundation analysis states, there "is compelling evidence that factors other than competition offer the best explanations for the lower-than-expected spending trend" in Part D.[27]   Lower enrollment explains more than half of the lower-than-expected costs, and the remainder largely reflects a system-wide slowdown in prescription drug costs, driven mainly by expiring patents on major drugs, fewer new blockbuster drugs, and greater utilization of generic drugs.  In fact, because private plans have done a poorer-than-expected job of negotiating discounts from drug manufacturers on their own, Medicare is actually incurring higher costs for prescription drugs than it likely would otherwise have spent.

[6] This analysis examines only the first five years of the Medicare Part D drug benefit (2006-2010) to exclude the effects of the Affordable Care Act provisions to close the so-called "doughnut hole" in the drug benefit and to charge increased premiums for higher-income beneficiaries, which began to take effect in calendar year 2011.  The first of these ACA provisions increased Part D costs in 2011, while the second lowered net costs.  Neither was anticipated when CBO and the Medicare actuaries issued their estimates of the drug benefit's costs when the benefit was enacted in 2003.

[7] CBPP analysis of 2004 and 2012 Medicare Trustees' Reports.  These figures exclude administrative costs (and are net of premiums and "clawback" payments through which states continue to contribute a share of the cost of providing drug coverage to dual eligible beneficiaries).

[10] The Medicare trustees only report actual enrollment and projected enrollment by calendar year.   These figures reflect an adjustment to estimate enrollment by fiscal year.

[11] CBO did not project specific year-by-year enrollment figures but had assumed that on average, about 93 percent of Medicare Part B beneficiaries would enroll in the Medicare drug benefit (or receive employer-sponsored retiree drug coverage subsidized by Medicare) during its first eight years.

[12] In 2010, actual costs were $1,519 per beneficiary compared to projected costs of $1,955 per beneficiary, according to the Medicare trustees.  These per-beneficiary cost figures exclude administration and are net of premiums and state clawback payments.

[23] 2008 is the exception as Medicare Part D per beneficiary costs fell between 2007 and 2008, in large part because insurers repaid Medicare for overpayments they received in 2006.  (Insurers had overestimated their expected costs in their plan bids for 2006.)  In addition, according to the Medicare trustees, premium receipts were higher than expected in 2008.

[24] Under a "best price" provision, drug manufacturers must provide state Medicaid programs the same level of rebates that they provide most other public and private purchasers if the rebates that they provide to other purchasers exceed certain minimum amounts.  As part of the Medicare drug law, Congress specifically excluded Medicare Part D rebates from the calculation of best price because of concerns that the best price provision could interfere with the expected ability of private plans to negotiate larger rebates than those required under Medicaid.