Lone Group Taxed Into Poverty Should Receive a Larger EITC

Federal Taxes Pushed 7 Million "Childless Workers" Below, or Further Below, Poverty Line in 2012

Policymakers have taken important steps in recent decades to prevent the federal tax code from taxing people into or deeper into poverty.  This bipartisan effort has helped shape various features of the tax code including the Earned Income Tax Credit (EITC), a tax credit for low- and moderate-income working people.  In addition to its other roles, such as serving as a pro-work wage subsidy, the EITC helps keep income and payroll taxes from pushing millions of low-wage workers into poverty.

But the commitment to keep the federal tax code from taxing low-income workers into poverty has fallen far short for one group of 7 million people:  childless adults.[1]  These individuals begin to owe federal income tax while earning less than the poverty line (which is now about $12,000 for a single worker).[2]  The income taxes they pay taxes them deeper into poverty, as do the substantial payroll taxes they also owe.  And, the EITC for which they are eligible is much too low to offset more than a very small share of their income and payroll tax liabilities.

In 2012, federal income and payroll taxes pushed 1.2 million childless workers into poverty and another 5.8 million deeper into poverty.  (See Figure 1.)

Increasing the EITC for childless workers, as the President and many in Congress have proposed, can help address this problem.  Making more childless workers eligible for the EITC — including those working full time at the minimum wage — and boosting the credit for workers currently eligible would significantly lessen the degree to which the tax code increases poverty among these workers.  And, because the EITC is only available to people who work, it also serves as a work incentive.  The EITC for families with children has been shown to increase employment rates markedly among low-income parents; a larger EITC for childless adults could have a similar pro-work impact on that group as well.

Childless Adults:  The Only Group Taxed Into Poverty 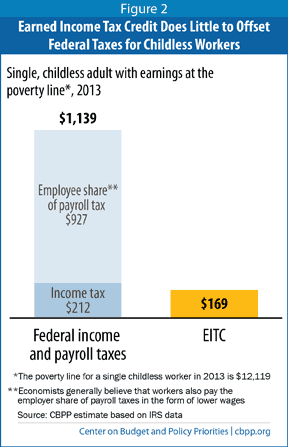 Families with children (as well as low-income seniors who receive most of their income from Social Security) do not start to owe income tax until their earnings are above the poverty line.  And, working poor families with children can qualify for an EITC and Child Tax Credit (CTC) that together offset their substantial payroll tax liability and help supplement their earnings.[3]

The situation for low-wage earning childless adults is very different.  Single childless adults begin to owe income taxes when their earnings reach just $10,000,[4] some $2,000 below the poverty line for a single adult.  A childless worker with earnings equal to the poverty line — $12,119 in 2013 — has an income tax liability of $212 (before the EITC) and owes $927 in the employee share of payroll taxes.  (The employer owes another $927 in payroll taxes, the burden of which, most economists agree, falls on workers in the form of lower wages.)  While the worker thus has a combined income tax and payroll tax liability of $1,139 (counting only the employee share of the payroll tax), she receives an EITC of just $169.  This tiny EITC is less than her income tax bill alone.  (See Figure 2.)

The combined effect of the income tax, including the EITC, and just the employee share of payroll taxes pushes this worker $970 below the poverty line.

Data from the Census Bureau’s Current Population Survey provide a comprehensive picture of how many childless workers are taxed into or deeper into poverty by their federal income and payroll taxes.  A CBPP analysis of these data shows that in 2012, federal income and payroll taxes pushed 7 million childless workers into or deeper into poverty, as measured using the Supplemental Poverty Measure.[5]  (See Figure 1, above.)

The design of the current EITC for childless workers means that many low-wage workers are entirely ineligible, while others receive a credit too small even to offset their income tax liability, let alone the far larger payroll tax.

Under current rules, the EITC misses low-income childless workers under the age of 25 entirely; young workers and those over 64 are ineligible.[6]  For those who are eligible, the credit is very small.  The EITC for childless workers phases in at a rate of 7.65 percent; in other words, a worker receives an EITC of 7.65 cents for each dollar of earnings until the credit is fully phased in at earnings of about $6,350.  Workers with earnings between $6,350 and $7,950 receive the maximum credit of $487.  The EITC for childless adults then begins phasing out when earnings exceed about $7,950 — just 66 percent of the poverty line for a single, childless worker.  In 2012, the average credit for eligible workers between ages 25 and 64 was only about $270, or less than one-tenth the average $2,900 EITC for tax filers with children.

Low-wage workers also pay state and local taxes, which tend to be regressive, meaning low-income people pay a higher share of their income in these taxes than higher-income people do.  Many states rely on regressive sales taxes, which can significantly affect low-income people who spend (rather than save) most of their income to make ends meet.  Half of all states plus the District of Columbia have enacted their own versions of the EITC, which help to reduce the state and local taxes that low-income working families face.  But those state credits do little to lower state and local taxes for low-wage workers without children, because they are typically set as a percentage of the federal EITC, which as noted, is very small for these workers.

The Institute on Taxation and Economic Policy (ITEP) estimates that the bottom fifth of taxpayers paid 11.1 percent of their incomes in state and local taxes in 2013, well above the 5.6 percent average rate that the top 1 percent of households paid.a On average, the bottom fifth of filers had incomes of $10,700 and paid state and local taxes of $1,188.

aCarl Davis et al., “Who Pays? A Distributional Analysis of the Tax Systems in All 50 States,” 4th Edition, Institute on Taxation and Economic Policy, January 2013, http://itep.org/itep_reports/2013/01/who-pays-4th-edition.php.

Strengthening the EITC for childless workers, as the President and many in Congress have proposed, could further encourage work, subsidize very low wages, and bolster child support from non-custodial parents.  In addition, leading experts believe that an expanded credit could help address some of the other challenges that less-educated young people face, such as high incarceration rates and low marriage rates.[8]

Increasing the EITC for childless workers would reduce the number of people in poverty and make poverty less severe for millions more.  For example, the President’s proposal to strengthen the credit, which would roughly double the maximum EITC for childless workers to about $1,000, would enable a childless worker with poverty-level wages to receive an EITC of $841 in 2015.[9]  (See Figure 4).  That would offset over 70 percent of the worker’s federal income tax and the employee-share of his or her payroll tax liability.[10]

Among the proposal’s many benefits is that it would lift about half a million people out of poverty and reduce the depth of poverty for another 10 million people, according to Treasury estimates.[11]  Similar proposals from members of Congress would also bolster the credit for childless workers.[12]  Because they expand the EITC by a larger amount than the President’s proposal, those Congressional proposals would have even larger anti-poverty effects.

The EITC has enjoyed broad bipartisan support over the years because it helps low-income people struggling to make ends meet, while encouraging work and personal responsibility.  In this spirit, policymakers should once again advance the bipartisan principle that people should not be taxed into poverty, and should increase the EITC for childless workers.

[1] The term “childless adult” is somewhat of a misnomer as it includes non-custodial parents, who are ineligible to claim their children for the purposes of the EITC.

[2] The official poverty threshold for a single, non-elderly individual with no children is $12,119 for 2013.  The estimates for the number of workers taxed into or further into poverty in Figure 1 are for 2012 and use the Supplemental Poverty Measure (SPM), which most analysts favor in part because it takes into account non-cash and tax-based benefits such as the EITC, which the official poverty measure leaves out.  (See footnote 5 for more on our methodology using the SPM.)  The SPM’s poverty line in 2012 was $11,635 for a single, childless, and non-elderly renter in a typical-cost community.

[3] As poverty is measured under the SPM, a family with children could be taxed into or further into poverty in unusual situations, such as because it has high, out-of-pocket medical expenses or child care costs.  For example, a family with children with limited health insurance coverage and high out-of-pocket medical expenses could be below the poverty line measured by the SPM, which subtracts out-of-pocket medical expenses from income, but have income significantly above the poverty line as income is counted for tax purposes.  As income is measured under the federal tax code, no working families with children can be taxed into or deeper into poverty if they claim the EITC (with the exception of families that are ineligible for the EITC because they are undocumented immigrant families).

[4] Their standard deduction for 2013 is $6,100 and their one personal exemption equals $3,900, which together exempt their first $10,000 in income from federal income tax.  The poverty threshold for one person, however, is $12,119, so an individual at the poverty line must pay income tax on $2,119 in wages.  In other words, single taxpayers without children must pay income tax while earning below poverty-level wages.

[5] CBPP analysis of the March 2013 Current Population Survey, using Census-Bureau-estimated taxes and the SPM. The estimate includes all workers who 1) do not have a qualifying child for the EITC; 2) are not a dependent; and 3) have federal income plus payroll taxes that push them below the poverty threshold, or who were already poor (based on their income before federal income and payroll taxes) but are pushed further into poverty by these taxes.  The calculation: (1) starts with a worker’s family cash income; then (2) adds the value of non-cash benefits such as SNAP and housing assistance; then (3) subtracts certain expenses like state and local taxes and medical expenses; and then (4) considers the effect of subtracting (or not subtracting) federal income and payroll taxes.  Thus, it considers the impact of these taxes on a person’s poverty status after taking all other taxes and assistance into account.

[7] Christine Scott and Margot L. Crandall-Hollick, “The Earned Income Tax Credit (EITC): An Overview,” Congressional Research Service, March 27, 2014.  This analysis categorizes families by the number of children under 18 in the extended family, which may differ from the number of children that qualify for the EITC.  The CRS analysis also relies on a poverty measure that is similar to but slightly different than the Census Bureau’s Supplemental Poverty Measure used for the analysis in Figure 1.

[9] Note that the poverty line and EITC in Figure 4 differ from the values in Figure 2 because they are for different years.