Lincoln-Kyl Estate Tax Amendment is Both Unnecessary and Unaffordable

On April 2 the Senate narrowly adopted (by a 51-48 vote) an amendment to the budget resolution by Senators Blanche Lincoln and Jon Kyl that would substantially weaken the estate tax. This proposal is both fiscally irresponsible — it would pave the way for a significant increase in long-term deficits and debt — and unnecessary to protect small businesses and farms, nearly all of which are already exempt from the tax under the 2009 estate tax rules, which President Obama has proposed to extend. The amendment also would lead to reductions in charitable contributions while benefiting only the wealthiest 0.25 percent of estates.

The nation’s fiscal situation has changed dramatically since Congress passed major estate tax cuts in 2001, with unsustainable deficits replacing large surpluses. If faced with today’s deficits back in 2001, Congress likely would not have taken such radical action to eviscerate the estate tax. The estate tax has already shrunken markedly from what it was a decade ago. Shrinking it further in the face of the nation’s daunting fiscal problems would not be fiscally responsible.

The 2001 tax-cut law gradually phased out the estate tax by raising the exemption level and reducing the top rate; in 2009, only estates valued at more than $3.5 million per individual ($7 million per couple) owe any tax, and the top rate is 45 percent. Under current law, the tax will disappear completely in 2010 but reappear in 2011 under its 2001 parameters, with a $1 million exemption and a 55 percent rate on the largest estates.

The President has proposed extending the tax permanently at its 2009 level. The Lincoln-Kyl amendment to the budget resolution would pave the way for subsequent legislation to increase the exemption to $10 million per couple, reduce the top rate to 35 percent, and “reunify” the estate tax and gift tax exemptions, which would further reduce revenues.

Moreover, the few large estates that would owe any estate tax under the 2009 estate tax rules and that would benefit from the Lincoln-Kyl proposal already pay a much lower tax rate than is generally understood. Some people assume that because the top estate tax rate in 2009 is 45 percent, taxable estates owe 45 percent of their value in taxes. This is simply wrong: the tax is applied only to the value of the estate that exceeds the exemption level, not to the full estate, and other deductions further lower the amount owed. The Tax Policy Center estimates that under the 2009 rules, the few estates that are taxable will owe an average of less than one-fifth of their value in tax.

According to the Joint Tax Committee, the Lincoln-Kyl proposal would cost about $100 billion over the first five years (2010-2014) and $332 billion over the first ten years (2010-2019), compared to current law, under which the estate tax is slated to return in 2011 to its pre-2001 parameters. Focusing on the 2010-2014 time period can be somewhat misleading, however, because 2010 is an anomaly: since the estate tax is scheduled to be repealed in 2010 under current law, any proposal short of repeal is “scored” as producing budget savings. Moreover, since the estate tax normally is not paid on estates until one to two years after a person dies, the full cost of the Lincoln-Kyl proposal would not show up until 2012 or 2013. As a result, 2012-2021 is the first decade in which the amendment’s budgetary effects would be fully felt. Over that ten-year period, the cost is likely to be about $440 billion compared to current law — $110 billion more than the Joint Tax Committee estimates for the 2010-2019 budget window. [5]

Compared to making the 2009 parameters permanent, the Lincoln-Kyl measure would cost approximately an additional $91 billion during the 2012-2021 period.

These estimates are significantly lower than estimates of similar proposals produced within the last year by the Joint Tax Committee and other reputable sources such as the Tax Policy Center. The probable reason for the decline in the cost estimates is the recent large loss in wealth through declines in the stock market, real estate values, and other asset values. Over time, as asset prices recover, the long-term cost of the Lincoln-Kyl proposal would also increase — and by quite substantial amounts.

Moreover, policymakers should not be misled by sponsors’ claim that the amendment will be paid for:

The question also arises: if Congress were to decide to pay for this proposal, where would the money come from? Would Congress divert scarce resources from financing health care or education reform — or from deficit reduction — to pay for a proposal that would benefit only the estates of the wealthiest one-quarter of 1 percent of people who die and that would come on top of the very generous tax relief such estates already enjoy as a result of the shrinkage of the estate tax between 2001 and 2009?

Despite the rhetoric of the proposal’s supporters, hardly any small businesses or farms would benefit from the proposal — or any proposal to shrink the estate tax below its 2009 level — because making the 2009 parameters permanent would itself shield nearly all such estates from the tax. As noted, only 100 small business and farm estates in the nation will owe any estate tax in 2011 if the 2009 estate tax rules are extended. [6] Indeed, the new Tax Policy Center analysis shows that only four of every 100,000 people who die leave an estate that is subject to the tax under the 2009 estate tax rules and consists primarily of a small business or farm (a business or farm with a value of up to $5 million).

In fact, when the Tax Policy Center evaluated a proposal similar to the Lincoln-Kyl proposal a few years ago, it found that only 0.2 percent of the proposal’s cost, relative to the cost of making 2009 law permanent, would go to tax cuts for small business and farm estates. In essence, small businesses and farms are being used as poster children to make a case for multi-million dollar tax cuts for the estates of the nation’s elite, most of whom have never farmed or been small business proprietors.

It also should be noted that the miniscule number of small businesses and farms that are taxable under the 2009 estate tax rules have access to special provisions that reduce and stretch out their tax payments. The myth that family farms and businesses must be sold to pay the estate tax was exploded by a Congressional Budget Office study a few years ago, which found that of the tiny number of farms and small businesses that would owe any tax under the 2009 parameters, nearly all would have sufficient liquid assets on hand (such as bank accounts, stocks, bonds, and insurance) to pay the tax without having to touch the farm or business.[7]

The few estates with any liquidity problems would have other options — such as spreading their estate tax payments over a 14-year period — that generally would allow them to pay the tax without having to sell off any of the farm or business assets. It is extremely unlikely that any small business or farm estates in the country would have to be liquidated to pay the tax under the 2009 rules.

Finally, a meaningful estate tax serves as a strong incentive for giving. If taxable assets are subject to the estate tax at a 45 percent rate, a charitable donation of $100 costs the donor only $55, because the other $45 would otherwise have been paid in estate tax. Under the Lincoln-Kyl proposal to reduce the rate to 35 percent, that donation would cost the donor $65. Brookings economist and noted tax expert William Gale has testified that “reducing the top estate tax rate would have a significantly negative effect” on charitable giving. [8]

The Lincoln-Kyl proposal would also reduce charitable giving through its increase in the estate tax exemption level, which would reduce the already small number of estates that are subject to the tax.

[1] The Tax Policy Center data on the number of estates owing any tax under alternative estate tax policies are from tables released on April 7, 2009, which reflect recently updated economic projections. (See: http://taxpolicycenter.org/numbers/displayatab.cfm?template=simulation&SimID=309) The CBPP calculation of those estates as a percent of deaths uses the Census Bureau’s projection of 2.611 million deaths in the U.S. in 2011.

[2] We follow the Tax Policy Center definition of a small business or farm estate. TPC defines such an estate as one in which more than half of the value of the estate is in a farm or business and the farm or business assets are valued at less than $5 million.

[4] The 0.25 percent figure is based on an estate tax exemption of $3.5 million in 2011. If the exemption is indexed for inflation after 2009, the Tax Policy Center estimates that slightly fewer estates — 0.24 percent — would be taxable in 2011. Other figures in this report are based on an indexed exemption, since Joint Tax Committee estimates of the cost of such a proposal assume indexation.

[6] The Tax Policy Center estimate that only 100 farms and small businesses would be affected in 2011 applies regardless of whether or not the 2009 estate tax parameters are indexed.

[8] William Gale, “Charitable Giving and the Taxation of Estates,” Testimony Submitted to the United States Committee on Finance, September 13, 2005. 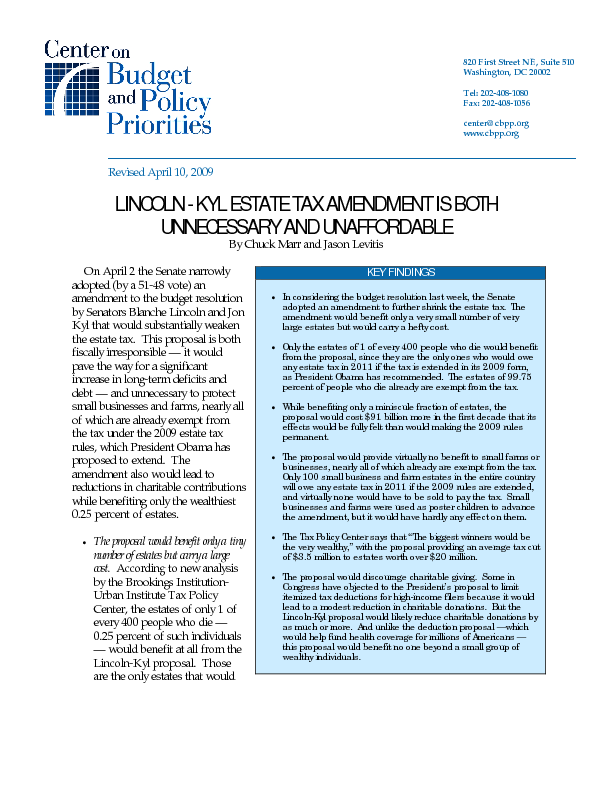