Job Growth Has Slowed Significantly in 2006

| By Isaac Shapiro and Aviva Aron-Dine

Average job growth in 2006 has been notably slower than in either 2005 or 2004.  Employment has grown at an average annual rate of about 1.4 percent so far in 2006, below an estimated 2.0 percent growth rate in 2005 and a 1.6 percent growth rate in 2004.[1]  That is, the pace of job growth has been considerably slower in 2006 than in 2005.  (Data cited here are from the Labor Department’s payroll establishment survey, the key employment level measure the Department highlights.)

Put in terms of numbers of jobs, in 2005 the economy created more than 200,000 jobs per month, on average.  This year, in the range of 160,000 jobs per month have been generated.  In September, the number of people employed increased by 51,000.  This increase reflected a slower pace of job growth than for the year as a whole and a slower pace than in any month since August 2003, except for the two months following Hurricane Katrina. 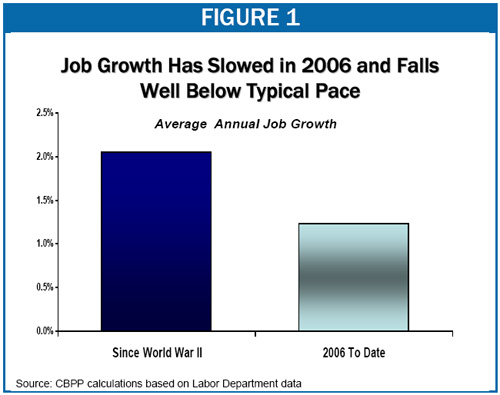 Average job growth in 2006 has been below the average rate of job growth for the entire post-World War II period, including both recession and recovery years.  From 1946 through 2005, annual employment growth averaged 2.0 percent.  The 2006 pace of 1.4 percent is less than three-fourths that rate (see Figure 1).

Considered another way, the economy has gained about 1.4 million jobs since December, 2005 [2] .  Had employment grown at its typical pace for the post-World War II period as a whole, it would have gained 2.1 million jobs.

Job Growth Has Been Slow Throughout the Recovery

During the first two years of the current recovery (which began in November 2001), the economy actually lost jobs.  While job growth picked up in 2004 and 2005, even in those two years it was unexceptional.  The paucity of jobs created this year is especially troubling in this context.

Taking into account the 2006 data, job growth in the 58 months since the current recovery began has averaged 0.7 percent, a record low for a post-World War II recovery period.[3]  In the average 58-month period following the end of a recession, job growth has occurred at a 2.4 percent annual rate.  Even in the equivalent period of the recovery of the 1990s, when the pace of job growth was somewhat slower, employment growth averaged 1.8 percent annually, twice the rate during the current recovery.

Total employment today thus remains far below where it would be had the current recovery followed the pattern of the typical post-World War II expansion.  By this point in the typical previous recovery, employment had increased by about 12 percent, as compared with less than 4 percent in the current recovery.  This gap represents about 10 million jobs (see Figure 2).

[1] As part of the employment data release, the Bureau of Labor Statistics announced an 810,000-job upward revision to the employment figures for the period from April 2005-March 2006 as a whole.  However, BLS has not yet provided specific month-by-month figures for this period. In order to take the revision into account in our calculations, we treat the additional job growth as evenly distributed  over the April 2005-March 2006 period. When BLS publishes the actual monthly totals in January, the precise figures for 2005 and 2006 job growth will change. (If unrevised figures are used, job growth in 2006 averages 1.2 percent, down considerably from the 2005 average growth rate of 1.5 percent.  When the changes are incorporated into the data, it is likely that both the 2005 and the 2006 employment growth rates will increase.  Job growth in 2006 will, however, remain lower than in 2005, as well as below the post-World War II average.

[3] The figures in this section also take into account the 810,000-job upward revision.