What Is Supplemental Security Income? 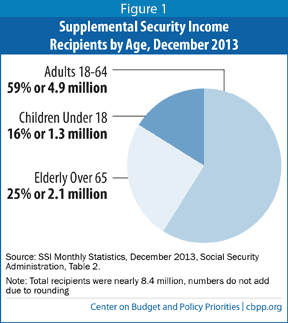 Congress created SSI in 1972 to replace the patchwork system of federal grants to states for aid to the aged, blind, or disabled.  According to the Social Security Administration (SSA), which administers SSI, those grants were “intended to supplement the incomes of individuals who were ineligible for Social Security or whose benefits could not provide a basic living.”[3]   Since its launch in 1974, SSI has guaranteed a minimum level of income to those who qualify.

An important difference between Supplemental Security Income (SSI) and Social Security is that the former is a means-tested program, while the latter is a social insurance program:

Means-tested programs are available only to persons with very few resources in the form of income or assets.  Typically, recipients must also meet additional criteria; in the case of SSI, they must also be elderly, blind, or disabled.  The Social Security Administration describes SSI as “assistance of last resort.”  While many SSI recipients also collect Social Security, a work history is not required for SSI.  Means-tested programs such as SSI have generally had difficulty in achieving high rates of participation among those eligible.

Social insurance programs protect workers and their families against common risks to their economic security, such as the loss of earnings and the cost of health care.  To share these risks as widely as possible, social insurance programs aim to be universal in their coverage.  Social Security is the largest U.S. social insurance program.  Almost all employment is covered by the program, and benefits reflect the amount of earnings on which a worker has made payroll tax contributions.  Anyone who is covered under Social Security can collect Social Security benefits once he or she works enough years and reaches age 62 or becomes disabled.  While Social Security benefits vary from person to person, everyone with a work history (or the qualified dependents and survivors of such workers) is eligible to collect from the program.  Virtually every eligible person claims his or her benefit.

Who Qualifies for SSI, and What Benefits Do They Receive?

To qualify for SSI, applicants must be aged or disabled and have little or no income and few assets (no more than $2,000 in assets for an individual or $3,000 for a couple, in most cases).

In 2014, the basic monthly SSI benefit is $721 for an individual and $1,082 for a couple.[4]   Beneficiaries who live in another person’s household and receive in-kind maintenance and support qualify for one-third less than this amount, while beneficiaries who receive long-term care in a Medicaid-funded institution qualify for $30 per month.  Many states supplement the federal SSI benefit, though state budget cuts are crimping those additional payments.

Those benefits, though, are reduced when recipients have other income.  In determining a person’s SSI eligibility and benefit levels, SSA exempts the first $20 per month of unearned income, such as Social Security benefits, pensions, interest income, or child support (this is known as the “general income exclusion”) as well as the first $65 per month of earnings (this is known as the “earned income exclusion”).[5]   Above those thresholds, each dollar of unearned income reduces SSI benefits by a dollar, while each dollar of earned income reduces SSI benefits by just 50 cents — a provision that is meant to encourage work.  SSA also exempts certain work-related expenses when reducing SSI benefits because of earnings.  While a small percentage of SSI recipients have some earnings and a somewhat greater percentage have unearned income, most recipients have no other source of income (see Figure 2).

Although the basic monthly SSI benefit for an individual was $710 in 2013, other sources of income reduced the average monthly benefit to only $529 in December 2013.[6]

SSI recipients may also get noncash forms of assistance.  In most states, anyone who receives SSI benefits is automatically eligible for Medicaid.  About half of SSI recipients also receive food stamps.[7]   About one-fourth of recipients live in public housing or receive other housing assistance, such as vouchers.[8]

Individuals may apply for SSI by phone or in person at one of SSA’s field offices.  SSA will verify the applicant’s identity, age, work history, and financial qualifications.  In the case of disability applications, state agencies called Disability Determination Services (DDSs) screen the medical and related evidence to judge whether the applicant meets the criteria set out in law — basically, whether he or she suffers from a severe impairment that will last at least 12 months or result in death and that makes it impossible to engage in substantial work.  (A slightly different definition applies to disabled children under age 18.)  If the DDS initially denies the application, individuals have several levels of appeal and may choose to be represented by an attorney.

Since 1974, the number of SSI recipients has slightly more than doubled (see Figure 3).  Over that time, SSI has changed from a program that mainly supplemented Social Security income for elderly adults to a broader anti-poverty program that aids the disabled of all ages.  SSI is an increasingly important program for children and persons with disabilities. 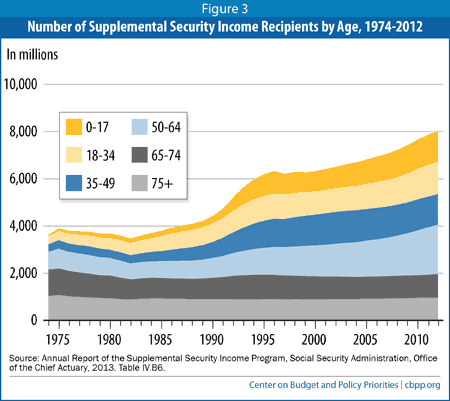 A substantial number of children — 1.3 million in December 2013 — receive SSI benefits.  Children with disabilities may be eligible for SSI since a child’s disability can impose additional costs on his or her caregiver.  The number of children receiving SSI has gradually increased since 1974 and accelerated dramatically after a 1990 Supreme Court ruling liberalized the disability criteria for SSI children.[9]   Reforms enacted in 1984 that expanded benefit eligibility for the mentally disabled (and that took several years to implement) also influenced the surge in children receiving SSI.[10]   Congress tightened the SSI eligibility rules for children in the 1996 welfare-reform law, however.

Most children who receive SSI live with a single parent and receive special education; on average, SSI payments provide nearly half of their family’s total income.  SSI program rules encourage parents to work; one-third of child recipients in single-parent households, and two-thirds of those in two-parent families, have a working parent.[11]

The vast majority — 86 percent — of all SSI recipients in 2012 were eligible because of a disability, and 6 in 10 disabled recipients had a mental disability.[12]   The share of SSI recipients who are disabled (rather than elderly) has grown steadily since the program’s creation.  Nevertheless, since the mid-1990s, SSI recipients under age 65 have essentially stabilized as a percentage of their respective age group.  And the percentage of people 65 and older who receive SSI has continued to fall (see Figure 4), chiefly because of increases in Social Security payments and restrictions on eligibility for legal immigrants who arrived after 1996.  Thus, even as the number of recipients continues to rise, SSI is not generally growing faster than population.[13]

As an entitlement program, SSI is available to anyone who meets its eligibility requirements.  Unlike Social Security (which is financed by dedicated payroll taxes), SSI is funded from general revenues.  At a cost of just over $50 billion in fiscal year 2012, SSI constitutes a small portion of the federal budget — 1.4 percent of total spending that year. [14]   SSI expenditures were 0.33 percent of gross domestic product (GDP) in 2012 and are expected to decline to 0.23 percent of GDP by 2037.[15]

SSI benefits are about three-fourths of the poverty line for a single person and slightly over 80 percent of poverty for a couple.[16]   Thus, while SSI alone is not enough to lift someone who lives independently out of poverty, it is instrumental in reducing the number of people in extreme poverty, and it greatly lessens the burden on other family members.  An SSA study found that, in 2010, the poverty rate (based on family income) of recipients would be 65 percent without counting SSI payments; the actual rate, including SSI, was 43 percent.  Most families with an SSI recipient remained below 150 percent of the poverty threshold.[17]

SSI is highly effective in reducing the aggregate poverty gap — that is, the total amount of money needed to lift families out of poverty — among SSI recipients.  In 2010, SSI reduced the aggregate poverty gap by over two-thirds. [18]   Still, more than two-fifths of SSI recipients live in families with incomes below the poverty threshold, even after taking their benefits into account, and many more elderly or disabled persons in need of assistance do not get any benefits.[19]   The following reforms could increase benefit adequacy and improve SSI participation among eligible people.

A 2002 SSA study simulated how selected SSI program changes would affect program participation and poverty status among the elderly.  SSA found that the most effective — though also the most expensive — reform was increasing the income exclusion levels, which raised participation by 20 percent and decreased the aggregate poverty gap among the elderly by 8 percent.[25]

In sum, SSI is an effective anti-poverty program that constitutes a relatively small portion of the federal budget.  SSI is critical in reducing extreme poverty among the elderly and disabled.  However, policymakers can take a number of steps to make SSI even more effective in helping those who are unable to support themselves because of advanced age or disability.

[5] For someone with no unearned income, the $20 and $65 exemptions are combined, so that the earned income exclusion becomes $85 per month.

[14] The total cost of SSI in fiscal year 2012 ($50.7 billion) includes $3.6 billion for administrative costs, which are subject to annual appropriation.  See The Appendix, Budget of the United States Government, Fiscal Year 2014, p. 1189, http://www.whitehouse.gov/sites/default/files/omb/budget/fy2014/assets/ssa.pdf .

[16] Based on Department of Health and Human Services (HHS) poverty guidelines, which differ slightly from thresholds used by the Census Bureau to determine the number of people living in poverty.  See http://aspe.hhs.gov/poverty/index.cfm for HHS poverty guidelines.  See http://www.census.gov/hhes/www/poverty/data/threshld/index.html for Census Bureau poverty thresholds.

[20] SSI cost-of-living adjustments have tracked inflation every year since 1975; only in 1983 did the benefit adjustment exceed inflation, as policymakers enacted a small across-the-board increase as part of that year’s Social Security Amendments.  Therefore, there has been only a tiny real increase in the basic SSI award since 1974.  See SSA OCACT, SSI Federal Payment Amounts, http://www.ssa.gov/oact/COLA/SSIamts.html for SSI cost-of-living adjustments since 1974.

Topics:
Social Security, Disability
Stay up to date
Receive the latest news and reports from the Center