During Congress’ lame-duck session, some members are expected to try to reinstate and even permanently extend the “bonus depreciation” tax break as part of legislation continuing various “tax extenders” (a package of primarily corporate tax provisions that policymakers routinely extend).  Bonus depreciation, which expired at the end of 2013, has never been considered a tax extender; it does not belong in the extenders package and should remain expired:

A Temporary Provision of Limited Effectiveness

One of policymakers’ first steps to stimulate the economy during the Great Recession was to enact bonus depreciation on a temporary basis in 2008.  They have since extended it several times as the economy struggled to recover.  The provision expired at the end of 2013.

Policymakers have always viewed bonus depreciation as a temporary provision designed to help boost a weak economy.  Its treatment has always stood in sharp contrast to the standard group of tax extenders such as the Research and Experimentation Tax Credit, which are repeatedly extended regardless of the state of the economy.

Evidence suggests that bonus depreciation is not a particularly cost-effective form of stimulus:

It is important to note that Goldman Sachs and Bloomberg focused on bonus depreciation’s impact on executives as they made investment decisions.  Now that 2014 is almost over, extending the tax break and making it retroactive to the start of the year would provide a generous, taxpayer-funded subsidy to companies for decisions they have already made.

Furthermore, to the extent that a temporary bonus depreciation provision has some — albeit very modest — effect in spurring economic activity during an economic downturn, making the provision permanent would sacrifice that boost.  Whatever small boost occurs stems from the fact that the extra tax break applies only to purchases made during the temporary period it’s in effect.  The temporary nature of the break may induce a modest number of firms to accelerate some purchases.  If the tax break were permanent — or if it is extended enough times that businesses effectively regard it as a permanent measure — firms will have no incentive to accelerate purchases and to make them while the economy is faltering because they will get the same tax break regardless of when they make the purchases.  A JCT report found that the House bill to make bonus depreciation permanent would have a negligible impact on employment and only a small impact on economic growth overall, despite its very large cost.[8]

Recovery from the Great Recession remains slow and efforts to spur growth and job creation —such as major infrastructure investments — would be welcome.  Bonus depreciation, however, isn’t an efficient way to do that.[9]

As noted, the House proposal to expand bonus depreciation and extend it permanently would be extremely costly — $276 billion over 2015 to 2024.[10]  (The cost would be roughly the same over ten years if Congress expanded bonus depreciation as under the House bill but repeatedly extended it for a year or two at a time instead of formally making it permanent.)[11]  By itself, this measure would wipe out one-third of the $770 billion in revenue raised by the high-income revenue provisions of the 2012 “fiscal cliff” legislation.  (See Figure 1.)[12]

Even without bonus depreciation, companies receive generous tax treatment when they invest in equipment and buildings, particularly if they borrow the funds to finance the investment.

When a company purchases a piece of equipment, it deducts the cost of the purchase over time.  The deductions occur as the equipment ages and loses its value, a process referred to as depreciation.  If the deduction is aligned with the equipment’s actual depreciation, the tax treatment is viewed as “neutral.”

A company can magnify the tax break from accelerated depreciation by financing its investments through borrowing (for instance, by taking out a bank loan or issuing a corporate bond).  Borrowing enjoys relatively favorable tax treatment because companies can deduct the interest payments on their debt.

The favorable tax treatment associated with accelerated depreciation and debt financing can together yield a tax rate that is actually negative, meaning that a company’s after-tax return on an investment exceeds its pre-tax return.  Instead of a company investing in equipment, making a profit, and sending a percentage of those profits to the government in taxes, the government in effect adds to the pre-tax profit of the company by providing a subsidy through the tax code.

CRS has pointed out that even without bonus depreciation, debt-financed investments face an actual (or effective) tax rate that averages negative 19 percent.[13]  In other words, companies do not pay taxes on the profits that flow from such investments but instead receive a tax subsidy of 19 percent, which they can use to reduce or eliminate other taxes owed.  Adding bonus depreciation on top of accelerated depreciation greatly expands this generous tax subsidy, pushing the average effective tax rate to negative 37 percent (see Figure 2).

Extending Bonus Depreciation Moves in the Opposite Direction of Tax Reform

The fundamental nature of tax reform is to “broaden the base” by scaling back tax subsidies and to use the freed-up funds to lower tax rates, reduce budget deficits, or both.  Bonus depreciation moves in the opposite direction by narrowing the tax base.  If made a permanent component of the tax code, bonus depreciation would make it more difficult to achieve revenue savings and reduce tax rates.

Because it is such a large tax subsidy, the treatment of depreciation tends to be a prime target of corporate tax reformers looking to broaden the tax base.  Chairman Camp’s comprehensive corporate tax reform plan, which he advanced earlier this year after extensive consultation with the corporate community and others, is a good example.  A central element of his plan is elimination of accelerated and bonus depreciation so that tax depreciation would “match closely the true economic useful life of assets.”[14]

[11] The cost of continually extending bonus depreciation for a year or two at a time without the House’s expansion would roughly equal the $254 billion cost of making it permanent without expanding it. 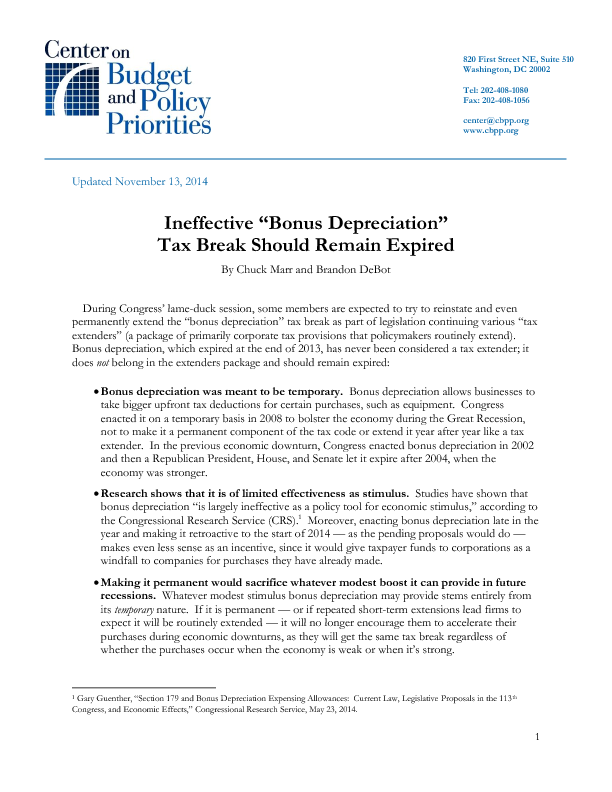