In Battle Over 2011 Appropriations, Both Sides Calling for Substantial Cuts

Public discussions about congressional efforts to agree on a measure to fund the government for the rest of fiscal year 2011 have focused on the difference between the size of the cuts in non-security appropriations recently passed by the House and an alternative proposed by Senate Democrats and voted on yesterday.  This focus has obscured the fact that the proposed cuts from both sides are quite deep when compared to last year’s enacted funding levels, adjusted for inflation. This is the usual measuring stick for assessing increases or decreases in appropriations bills from one year to the next, since funding levels must keep pace with inflation in order to maintain the same level of public services.

The two proposals, both of which the Senate rejected on March 9, are also $108 billion and $56 billion, respectively, below what the President requested for 2011 in the budget he submitted last year.

Although fiscal year 2011 began more than five months ago (on October 1, 2010), Congress has not yet completed action on appropriations for the fiscal year.  The government is operating under a continuing resolution (the fifth so far this year) that will expire on March 18.  Congress is considering various proposals that would fund the government for the rest of the year while imposing substantial cuts in the amount of funding that would be available.

Funding Would Be Well Below 2010 Levels Under All Recent Proposals

Table 1 shows the level of 2011 discretionary funding under last year’s appropriations, adjusted for inflation, and six different proposals.  The amounts are split between funding for security programs (funding provided by the Defense, Homeland Security, and Military Construction-

Veterans Affairs appropriations bills) and non-security programs (funding provided by the other nine appropriation bills).  All of the levels exclude emergency funding, which is largely funding for the wars in Iraq and Afghanistan.  The seven alternatives are: 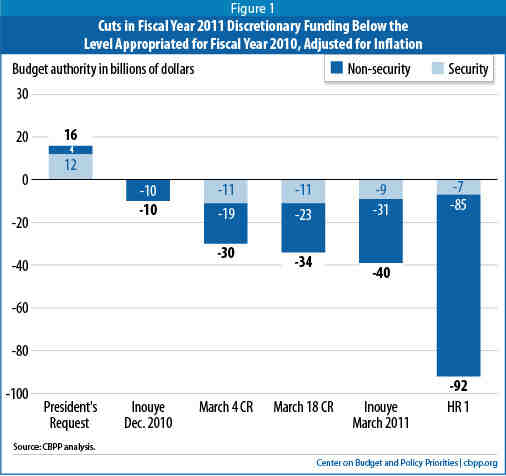 Figure 1 compares the President’s budget request and subsequent congressional proposals to the CBO baseline. As it shows, all of the congressional proposals come in well below the 2010 funding level, adjusted for inflation.  For example, the continuing resolution that expired March 4 — which funded appropriations at the nominal 2010 level — falls $30 billion short of maintaining the 2010 level of public services.

By far the deepest package of cuts was the House-passed H.R. 1, which provided $61 billion less in total discretionary funding than the March 4 continuing resolution and $92 billion less than the funding required to maintain the 2010 level of public services. [7]

[2] Technically, the Inouye proposal is $28 billion below the funding level contained in the proposed omnibus appropriations bill that Senator Inouye brought to the Senate floor in December.  The omnibus bill was specifically designed to hit the Sessions-McCaskill level and was put together by Senate appropriators on a bipartisan basis last fall, before pressure from House Republicans and Tea Party groups following the election led Senate Republicans to abandon what had been their proposed 2011 funding level.

[5] The budget the President submitted last year called for Congress to make all Pell Grant funding mandatory (a small portion already was mandatory), but Congress decided to keep funding for the basic award discretionary.  The adjustment is the amount of discretionary funding required to fund the President’s proposal to maintain the maximum award at the same level as in 2010.