Because of their potential impact in reducing child poverty and hardship, proposals to improve the refundable Child Tax Credit have garnered significant bipartisan support. In the Senate, Olympia Snowe (R-ME) and Blanche Lincoln (D-AR) have introduced legislation that would begin to address key flaws in the credit's structure. In the House, Ways and Means Committee Chairman Charles Rangel’s tax reform proposal would make even larger improvements, as would legislation introduced by Representatives Christopher Carney (D-PA) and Todd Platts (R-PA). A temporary version of Chairman Rangel’s measure is included in the tax "extenders" bill scheduled adopted last week by the House Ways and Means Committee.

The Problem: Current Credit Leaves Out Millions of Low-Income Children

The Child Tax Credit is a $1,000 per-child tax benefit intended to defray some of the costs associated with raising children. In general, tax credits can be either refundable or nonrefundable. If a credit is nonrefundable, it is available only to tax filers who can use it to reduce positive income tax liability. Thus, nonrefundable tax credits have no value for those with incomes too low to owe taxes, a group that includes millions of low-income working parents.

The Child Tax Credit falls in between these two categories; it is partially refundable. While the credit does benefit millions of families with incomes too low to owe taxes, millions of others are left out or qualify for only a partial credit. In total, some 6.5 million children in low-income working families will be ineligible for the Child Tax Credit in 2008, according to estimates by the Urban Institute-Brookings Institution Tax Policy Center. An additional 10.3 million children will receive less than the full credit amount.[1] (See Figure 1.)

As a result of the Child Tax Credit’s current structure:

The Child Tax Credit’s unavailability to millions of low-income children substantially reduces its effectiveness in combating child poverty and hardship. For example, the credit lifts about 1.2 million fewer people out of poverty than it would if it phased in from the first dollar of earnings, and 2.6 million fewer people than it would if it were fully refundable.[3]

In general, the purpose of indexing tax parameters for inflation is to make sure that families do not see their tax burdens increase just because their incomes have grown to keep up with inflation. The underlying principle is that tax burdens should rise only if real income (adjusted for inflation) increases. 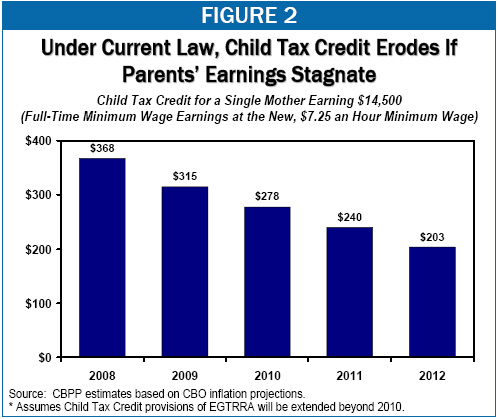 The result of indexing the Child Tax Credit threshold, however, is to reduce tax benefits for workers whose real incomes fall. Many low-income families have not seen income gains commensurate with inflation over the past few years. Instead of cushioning the blow for these families, the tax system has compounded their difficulties by reducing their Child Tax Credit each year.

In 2008, returning the refundability threshold to $10,000 would extend the benefits of the Child Tax Credit to 1.8 million children who would otherwise be ineligible, according to Tax Policy Center estimates. Moreover, the number of children who would gain access to the credit would increase each year, as the gap between the $10,000 threshold and the threshold that would be in place under current law (with inflation indexing) increased. By 2010, the Snowe/Lincoln proposal would reach 2.2 million low-income children.

For state-by-state estimates of the effects of the Snowe/Lincoln and House-passed proposals, see Appendix Tables 1 and 2.

Census data* provide important information about the families that would benefit from the Child Tax Credit provision included in the House AMT patch bill and about the jobs the parents hold:

* All of the figures presented here are CBPP calculations based on the March 2006 Current Population Survey. Estimates of the number of children who would benefit from the CTC provisions that are based on the March 2006 Current Population Surveyare somewhatlower than thosecomputed by the Tax Policy Center. Because TPC hasmore complete data on tax filing units and tax filers’ taxable income than are available from the Census Bureau,the TPC figures on the total number of children who would benefit aregenerally considered more accurate than the estimates using the March CPS data. Thus, the estimateswe compute from the March CPS datawereadjusted to match the TPC figures for the total number of children helped. (The TPC data do notprovide information about the characteristics of those helped; that information is only available from the detailed information collected by the Census Bureau.)

For state-by-state estimates of the effects of the Snowe/Lincoln and House-passed proposals, see Appendix Tables 1 and 2.

[3] CBPP estimate based on analysis of the March 2006 Current Population Survey.