State policymakers can make substantial improvements to their state fiscal systems in 2007 legislative sessions.  This paper is a guide to relevant Center on Budget and Policy Priorities analyses that describe some opportunities for improvement as well as challenges that states may face this year.  Each of these analyses is online and may be found by clicking on its name below or by typing its name in the "search" box at www.cbpp.org.

Although recent revenue growth in many states has been strong, a number of states are projecting budget gaps in 2008, 2009, or later years.  In State Budgets: On the Edge?, Elizabeth C. McNichol and Iris J. Lav identify many such states and describe some of the actions states may wish to pursue to avert those deficits.

One reason revenues may come up short is that many states’ sales and corporate income taxes contain fundamental flaws.  Tools for fixing some of the corporate income tax flaws are described by Michael Mazerov in Closing Three Common Corporate Income Tax Loopholes Could Raise Additional Revenue for Many States and in Disallowing Business Operating Loss Carrybacks.

The opportunities for states to strengthen and modernize their sales taxes are described in Expanding Sales Taxation of Services: Options and Issues by Michael Mazerov.

State Revenue Losses from the Federal “Domestic Production Deduction” Will Double in 2007 .

One popular tool for addressing budget gaps and financing new initiatives is to raise cigarette taxes, but such an approach has its pitfalls, which Iris J. Lav describes in

Averting TABOR and Its Cousins

Voters in Maine, Nebraska and Oregon in 2006 rejected proposals to enact the highly restrictive budget limitation measure known as TABOR.  Similar proposals were killed in nearly a dozen legislatures.   But anti-tax activists have indicated they will push again for its enactment in 2007 in a number of states.  In A Formula for Decline: Lessons from Colorado for States Considering TABOR, in an accompanying video available at http://www.cbpp.org/ssl-series.htm, and in a series of other papers available at the same website, Karen Lyons and other CBPP staff explain TABOR’s flaws.

Even less draconian proposals than TABOR may be deeply flawed.  In A “Super” Bad Idea, Nicholas Johnson explains why one such TABOR-lite change — requiring legislative supermajorities to raise taxes — robs states of the flexibility they need to grow and prosper.

Recent revenue increases may tempt policymaker into excessive tax cuts.  A number of states went too far last year and passed tax cuts that are likely to prove unsustainable, as Nicholas Johnson and Sarah Farkas document in Tax Cuts on Layaway: The Short– and Long-term Fiscal Implications of 2006 State Tax Actions.

States should be particularly wary of making the same mistakes they made in the middle and late 1990s, when a number of states spent their budget surpluses on excessive tax cuts.  Nicholas Johnson and Brian Filipowich explain what happened to those states in Tax Cuts and Continued Consequences: States That Cut Taxes the Most during the 1990s Still Lag Behind.

One type of tax cut that may prove particularly problematic is repeal of state estate taxes.  In Assessing the Impact of State Estate Taxes, Elizabeth C. McNichol explains why these important revenue sources should be retained.  About half of states are doing so, as documented in State Taxes on Inherited Wealth Remain Common: 24 States Levy an Estate or Inheritance Tax.  Another good resource is Research Findings Cast Doubt on Argument That Estate Taxes Harm State Economies.

Another particularly problematic tax cut, this one within the corporate income tax, is described by Michael Mazerov in The "Single Sales Factor" Formula for State Corporate Taxes: A Boon to Economic Development or a Costly Giveaway?

Policymakers may also find tax cuts for senior citizens alluring.  But those could be highly costly as the population ages, according to Elizabeth C. McNichol in Revisiting State Tax Preferences for Seniors.

Challenges aside, states have a chance in 2007 to make important policy advances in several areas.

Working families with low and moderate incomes have not benefited as much from the present economic recovery as wealthier families.  State policies can address this problem.

A few states still levy income taxes on working-poor families.  Reducing or eliminating those taxes represents a significant policy opportunity, as Jason Levitis and Nicholas Johnson describe in The Impact of State Income Taxes on Low-Income Families in 2005.  States without income taxes also may want to consider relieving taxes on poor families, a topic which will be address in Iris J. Lav and Ifie Okwuje's forthcoming paper Low-Income Tax Relief in the Absence of an Income Tax.

Other approaches to supporting work – including child care, health care, and workforce development strategies – are described in State Policies to Assist the Working Poor by Elizabeth C. McNichol and John Springer.

Property taxes are likely to be on the agenda in many states.  The best way to address the property tax issue is to target relief to those families most in need, an approach described by Nicholas Johnson, Sarah Farkas and Karen Lyons in the forthcoming paper The Property Tax Circuit Breaker: Targeted Tax Reduction for Middle- and Low-Income Households.

States may also reconsider their approaches to the taxation of grocery food.  The pros and cons of taxing groceries are considered by Nicholas Johnson and Iris Lav in

Should States Tax Food?: Examining the Policy Issues and Options , a 1997 report that is still relevant.   See also Which States Tax the Sale of Food for Home Consumption in 2006?

Improving the Transparency and Accountability of State Budgets

States make better tax and budget decisions when better information is available to policymakers, advocates, journalists and the general public.  For instances, as Jason Levitis describes in a forthcoming paper entitled Tax Expenditure Reporting:  Holding States Accountable for Spending Through the Tax Code, states can provide tax expenditure budgets to shed light on the “spending” that occurs in the form of tax credits, deductions and other provisions – spending that otherwise might go entirely unnoticed.

Another way of promoting accountability in the tax code is to require that a state document how the burden of taxes – and the benefits of tax cuts – are distributed among its citizens.  Michael Mazerov describes this strategy in Developing the Capacity to Analyze the Distributional Impact of State and Local Taxes.  Corporations, in particular, may benefit from special tax provisions;  requiring that such special provisions be made public can is the topic of a forthcoming paper by Michael Mazerov entitled Corporate Tax Disclosure:  The Next Step in Corporate Tax Reform.

Most states also can do a better job of forecasting their spending needs from year to year.  Elizabeth C. McNichol and Ifie Okwuje explain how in a forthcoming paper The Current Services Baseline:  A Tool for Making Sensible Budget Choices.

Planning for the Future

State legislatures budget for one year or two years at a time.  There are very few provisions for requiring longer-term planning.  But nearly all experts on state tax and budget policy agree that states face major budgetary challenges in the coming decade.  Those challenges are documented in

Faulty Foundations: State Structural Budget Problems and How to Fix Them .  State policymakers could begin solving some of those problems now.

States should also create adequately financed rainy day funds that can help them weather the next recession.  Most states have such funds, but most are underfinanced or have other structural flaws.  See Rainy Day Funds: Opportunities for Reform, as well as an older but still relevant paper entitled 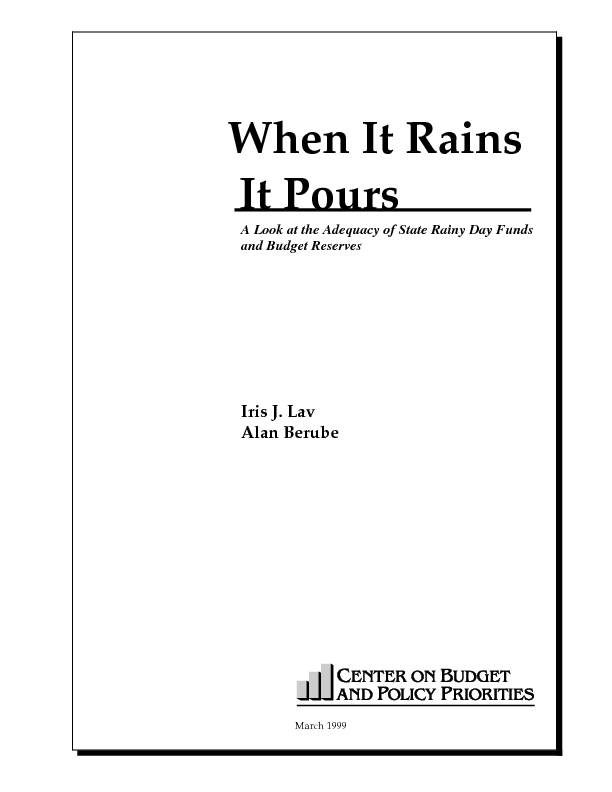 When It Rains, It Pours , coauthored by Iris J. Lav that describes the importance of adequate rainy day funds.

Several recent Center on Budget and Policy Priorities papers may help provide some state-specific context for fiscal and economic policy in the upcoming legislative sessions.  These include: