If States Fail to Use Stimulus Funds as Intended, Efforts to Strengthen Economy Could Be Undercut

A few governors and legislative leaders have suggested that their states might not accept the full amount of fiscal relief in the new recovery legislation or might use the funds to finance tax cuts or build up reserves, rather than spend them as Congress intended.[1]  Such actions could weaken the new law’s impact, and possibly even prolong the recession, by reducing the amount of stimulus injected into the economy.

The legislation provides states with roughly $135 billion to $140 billion to help close operating budget shortfalls, most of it in the form of increased Medicaid funding and a “State Fiscal Stabilization Fund” aimed primarily at ongoing education costs.  These funds will help the economy recover by averting cuts in state expenditures.  The sooner the states use the money, the faster the economy is likely to improve.

When states cut spending, they lay off employees, cancel contracts with vendors, eliminate or lower payments to businesses and nonprofit organizations that provide direct services, and cut benefit payments to individuals.  In all of these circumstances, the companies and organizations that would have received government payments have less money to spend on salaries and supplies, and individuals who would have received salaries or benefits have less money for consumption.  As a result, budget cuts directly remove demand from the economy.

Moody’s Economy.com estimates that every dollar of federal fiscal relief that is used to avert state budget cuts increases economic activity by $1.38.

Arguments Against Using Aid As Intended Do Not Withstand Scrutiny

The arguments against using the fiscal relief as Congress intended are based on several myths:

[1] For example, Governor Sanford of South Carolina has stated, “I think there are a number of wrinkles that have caused a number of us to say ‘Wait a minute, let’s take a look — a long look — at whether or not this really makes sense for our state.’ ”  (“Sanford on the stimulus,” Atlanta Journal-Constitution, February 19, 2009.)  Governor Freudenthal of Wyoming has said, “If it is simply money that is available, but it is not money that works with the agenda that works in Wyoming, I’m not going to take it.”  (Governor Says He’ll Scrutinize Stimulus Funds,” Casper Star-Tribune, February 19, 2009.)  Georgia’s legislature has already approved using nearly $500 million in state Medicaid funding freed up by the fiscal relief to continue a program that reduces homeowners’ property taxes.  In addition, Governors Jindal of Louisiana and Barbour of Mississippi have said they do not plan to accept the new option in the law to reform their states’ unemployment insurance systems in order to cover more low-income and part-time workers. 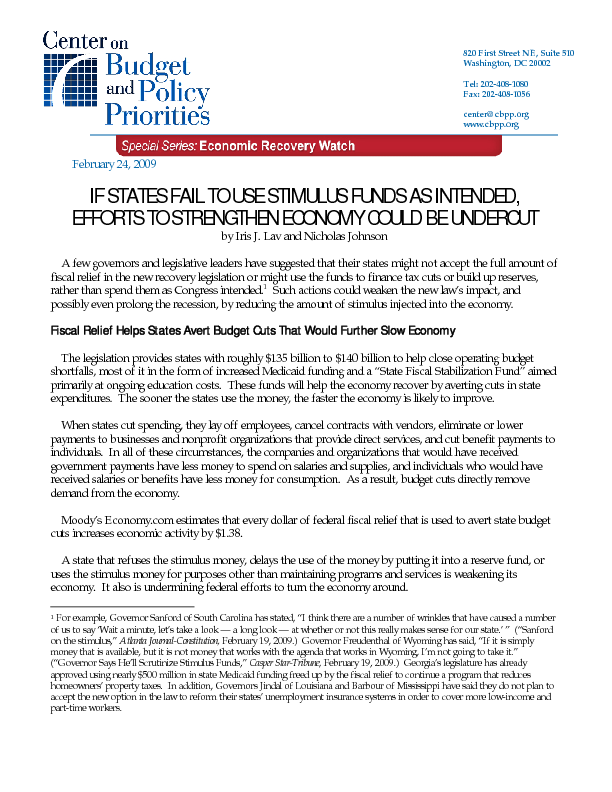