Hunger, Crowding, and Other Hardships Are Widespread Among Families in Poverty

Two recent, little noticed government reports spotlight the strained living conditions of millions of U.S. families. One report shows that the number of Americans threatened by hunger inched upward for four straight years from 1999 to 2003, with one in eight people falling in this category in 2003. The other report examines a long list of hardships that are tied to poverty status. Our own analysis, combining measures used in that report, finds that 8 million poor and near-poor children live in households that have experienced recent hunger, severe crowding, or problems paying bills so serious that phone or utility service was shut off.

The first report, from the U.S. Department of Agriculture, found that the number of American households ever experiencing hunger during the year rose by nearly one-quarter from 1999 to 2003. Further, the proportion that was either hungry or threatened by hunger — a group the government terms “food insecure” — has edged higher for four straight years. Nearly 13 million households containing 36 million Americans were food insecure in 2003.

The second report, from the U.S. Department of Health and Human Services, took an unusual, more comprehensive look at hardships affecting households with children. Besides hunger and food insecurity, HHS examined difficulties paying bills and meeting other basic needs, as well as housing safety problems (such as broken windows and exposed wires) and severe crowding. (See box.) A new Center analysis, using the same raw survey data and hardship measures used in the HHS report, finds that:

These cross-cutting hardship findings are based on government survey data gathered in 1998. Although the data are thus six years old, other data suggest that the situation for low-income families today is likely to be similar to that in 1998. The number of poor Americans was higher in 2003 than in 1998. Moreover, data from the Urban Institute show that rates of food hardship and housing hardship among low-income parents were virtually unchanged from 1997 through at least 2002.

Under both sets of findings, from USDA and from the Center analysis of HHS measures, the levels of hardship shown are almost certainly far lower than they would otherwise be because of federal housing, nutrition, and other basic assistance programs.

Hunger and problems affording adequate food affect millions of American households each year and, after declining in the late 1990s, have grown somewhat more common during recent years.

More than 3.9 million households, containing 9.6 million Americans, experienced “food insecurity with hunger” at least once during the year in 2003, according to the USDA.[2] The number of Americans in households experiencing hunger rose from 7.8 million in 1999 to 9.6 million in 2003, an increase of 24 percent.

The government considers hunger a severe form of the broader problem of “food insecurity.” More than 36 million Americans lived in households that were “food insecure,” with or without hunger, in 2003; this means that at “some time during the year, these households were uncertain of having, or unable to acquire, enough food for all their members because they had insufficient money or other resources.”

The HHS report brings together data on an unusually wide range of hardships, from hunger to crowded housing. [3] HHS examined 14 distinct types of hardships related to “basic needs and food security” and “housing safety and overcrowding.” All 14 hardships were closely related to poverty status, occurring two to eight times more often among poor families as among non-poor families with incomes above twice the federal poverty line, data in the report showed.

The Center’s own computer analysis of these data extends the HHS findings in two ways: first, by looking cumulatively across the measures to reveal how many families experience combinations of different hardships, and second, by looking at a measure of poverty that is based on annual rather than monthly income.[4]

The Center found that one in three poor households with children (34 percent) experienced at least one of the following hardships: hunger in the last four months; lived in severely crowded housing (with 1.5 or more people per room); or had their phone or utilities shut off in the last 12 months. These households contained approximately 4 million dependent children under 18. (See Figure 1.) (As explained below, the definition of crowding used by the HHS study is more extreme than the standard federal definition and understates the prevalence of crowding and hardship overall.) 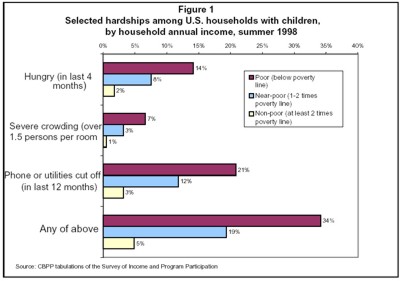 “Basic Needs and Food Security” Hardships
(ever experienced in the last 12 months, unless noted)

HHS also examined the presence of durable goods (a refrigerator and a gas or electric stove). At least 98 percent of poor families had these items. Durable goods are not included the Center’s analysis.

Items 1b, 2b and 6b above are not counted separately in the Center’s count of multiple hardships. See footnote 5

The relatively high rates of hardship among near-poor families suggest that having income slightly above the federal poverty line is often not enough to protect families from hardship. The federal poverty line (which was $18,810 a year for a family of four in 2003) may be a low standard for low-income working families, who comprise the majority of poor and near-poor families and who may face high child care costs and other work expenses.

The Center also found that experiencing multiple hardships was common among families in poverty. [5] More than half of families below the poverty line, containing nearly 6 million children, had two or more of 14 distinct hardships examined by HHS. (See Figure 2.) [6]

The Center analysis uses the same data source used by HHS: data gathered in the summer of 1998 by the Census Bureau's Survey of Income and Program Participation (SIPP), which tracked a representative sample of 40,000 American households for 4 years starting in 1996.

The data used by HHS and the Center analysis are conservative in key respects. For example, the definition of crowding used by HHS (more than 1.5 persons per room) differs from the standard government definition and thus understates the extent of crowding in particular and hardship in general. If crowding is defined as U.S. Department of Housing and Urban Development defines it (more than 1 person per room) the figures above would have shown that substantially more poor families — 46 percent rather than the 34 percent shown above — experienced hunger, crowding, or phone or utility shutoffs.

While the cumulative hardship data used by HHS and the Center were gathered in 1998, and are thus six years old, several facts suggest that conditions of hardship among poor families have not changed very much.

“Although the strong economy helped ease food hardship among low-income parents between 1997 and 1999, that gain was erased over the succeeding three years. Housing hardship among all parents did not diminish between 1997 and 2002, even though overall family income improved somewhat. Moreover, low-income single parents reported significant increases in housing hardship, particularly between 1999 and 2002. These findings reflect the difficulties parents have in stretching their incomes to cover the food and housing needs of their families, especially when the economy is weak and housing costs are rising.” [7]

Because food and housing hardships comprise the bulk of the hardships reported in the 1998 hardship data, and because neither type of hardship has shown signs of major change, it seems unlikely that the overall hardship picture has improved much since the data were collected.

While hardship and poverty figures for 2004 are not yet available, there is little reason to expect dramatic improvement when the 2004 figures become available. Early indicators for 2004 show that the employment rate has merely held steady (at 62.3 percent of all adults in the first 11 months of the year in both 2003 and 2004), while wages at the bottom of the economic ladder have not kept pace with inflation.

Moreover, aspects of the safety net have weakened. For example, in December 2003, Congress allowed the Temporary Emergency Unemployment Compensation program for long-term unemployed workers to expire. Partly as a result, a record 3 million long-term jobless workers exhausted their regular unemployment benefits during the first ten months of 2004 before they found a job. [8]

Poverty and Hardship Would Be Higher Without Anti-Poverty Programs

Millions of Americans receive assistance meeting their basic needs through a range of public benefit programs. These include social insurance programs like Social Security and unemployment insurance, income-tested programs like Temporary Assistance for Needy Families, housing and nutrition assistance, and tax credits for working families.

Altogether, income and non-cash benefits from these programs lifted 28 million people above the poverty line in 2002, reducing by one-half the population that would have otherwise been poor. The programs also provided vitally needed assistance in helping people meet their food, housing, and other basic needs.

The levels of hardship shown here would almost certainly be far higher were it not for these and other public antipoverty efforts.

[1] The author owes a special thanks to Ying Wang for extensive data preparation.

[4] In determining household poverty status, the HHS report looks at income during the particular month in which the Census Bureau’s hardship survey was administered. The 12-month income measure used by the Center corresponds more closely with the official annual income definition used in other federal reports. Using a 12-month measure also helps avoid a problem noted in the HHS report, namely, that monthly income may not reflect the income of the household at the time the reported hardship actually occurred, which may be up to 12 months prior to the survey.

[5] In counting the number of distinct hardships that households experience, the Center did not count three hardships considered by HHS (eviction, utility shutoffs, and hunger) because they represent extreme instances of other hardships already counted (namely, failure to pay rent, failure to pay utilities, and food insecurity).

[6] The Center analysis finds that 72 percent of poor households with children faced one or more of the 14 distinct HHS hardships. This total, however, should be regarded cautiously. It includes one living condition, infestation by rodents or other pests, that is relatively common at all income levels (although it is most common in lower-income homes). The total also includes some events that may not always reflect material deprivation, such as failure to obtain needed dental care, which the report notes could simply reflect “a general dislike of dental appointments.” Consequently, a substantial proportion (30 percent) of non-poor families with incomes above twice the poverty line reported one or more of the 14 HHS hardships.

Some higher-income families may also report hardships because they live in parts of the country with high housing costs that strain their budgets, or because they have experienced recent job loss, divorce, or other crises.