In a press conference on April 28, President Bush endorsed a proposal that would result in substantial cuts in benefits for middle-income families and deeper cuts for higher-income families. While the proposal was described as reducing benefits for the most affluent Americans, it would result in large benefit reductions for middle-class workers, as well.

Why the Benefit Reductions Are So Large

That the proposal entails such large benefit reductions for workers who are not affluent is the result of the President’s apparent insistence on closing most or all of the solvency gap through benefit cuts, rather than — as was done in 1983 — through a balanced mix of benefit changes and new revenues. Under a balanced approach, benefit cuts of this severity could be averted.

Moreover, the plan is considerably less progressive than the President has presented it as being. The progressive price indexing proposal that the President has embraced applies the same size benefit reduction to people who make $90,000 as to people who make $9 million, and workers making $60,000 would be subject to a reduction nearly as substantial. A more balanced and progressive approach that included new revenues from those who could afford to pay them could restore sustainable solvency with significantly smaller benefit cuts for middle-class retirees and no net benefit cuts for people with disabilities.

The President’s proposed change in the Social Security benefit structure is essentially a plan known as “progressive price indexing,” which has been designed by investment executive Robert Pozen. Analysis by the Social Security Administration’s actuaries shows that Mr. Pozen’s plan would reduce benefits for average earners retiring in 2075 by 28 percent, relative to the current benefit structure, and that this reductionwould apply equally to retirees, survivors, and people with disabilities. [1] The actuaries also have reported that the benefit reductions under the Pozen plan would close about 70 percent of the 75-year Social Security shortfall.

As a result, under the President’s plan, defined Social Security benefits (for people electing the accounts) would be lowered twice — once due to the indexing changes, and a second time to pay for the accounts.

The White House issued a fact sheet April 28 stating that its proposals, too, would close 70 percent of Social Security’s financing problems. To do that, the President’s plan either must cut disability as well as survivor benefits substantially — after all, one-sixth of the savings in the Pozen plan come just from reductions in disability benefits — or cut retirement benefits for middle-class workers even more deeply than the figures cited above (which are the actuaries’ estimates of the benefit reductions under the Pozen plan). If the President’s plan shields disability benefits from cuts, as the President implied — and does not cut retiree and survivor benefits more sharply than the Pozen plan — then it will close 59 percent of Social Security’s 75-year shortfall, not 70 percent. [2] (The 59 percent figure also reflects the small cost of the poverty-level minimum benefit the President proposed in his press conference.) [*]

How the Pozen Proposal Works

Mr. Pozen has proposed changing the formula used to calculate Social Security benefits in a way that would reduce benefits, relative to the benefits under the current benefit structure. Under the Pozen plan, the magnitude of the benefit reductions would grow significantly over time and would be applied somewhat more to higher-income workers than to middle-income workers. Low-income workers would not be subject to the reductions.

More specifically, the Pozen plan would reduce certain factors used to calculate benefits for retirees, people with disabilities, and survivors (e.g., children of workers who die prior to retirement).[3] As a result, those receiving survivors and disability benefits would be affected. All three groups would get the same percentage reduction in their Social Security benefits.[4]

To Protect People With Disabilities, the President Would Need to Increase Pozen’s Benefit Cuts for Retirees and Survivors by About One-fifth

The White House fact sheet states the President’s “reform would solve approximately 70 percent of the funding problems facing Social Security.” To achieve this goal and also protect disability benefits, as the President suggested last night that his plan would do, would require larger benefit cuts for retirees and survivors than the cuts the Pozen proposal would exact.

Protecting people with disabilities would result in about one-sixth less in solvency improvement than the original Pozen proposal. In addition, the President proposed a new minimum benefit for poor seniors, which would add a further, albeit modest, cost. If the proposal to shield disability benefits and the proposed minimum benefit are coupled with the Pozen plan’s benefit reductions for retirees and survivors, the President’s proposal would eliminate 59 percent of Social Security’s 75-year deficit, rather than 70 percent. Eliminating the 75-year deficit is universally considered a necessary condition for any Social Security reform that achieves solvency.

For the White House statement that its plan would solve 70 percent of the deficit “by adopting a sliding-scale benefit formula, similar to the Pozen approach” to be correct if disablility benefits are protected, the White House would have to make the Pozen sliding scale more severe so that benefit cuts for retirees and survivors would be roughly one-fifth larger than those that would occur under the Pozen plan.

Larger benefit cuts for retirees and survivors may not be part of the President’s plan. If so, the plan will not close anywhere near 70 percent of the 75-year Social Security’s shortfall. If that is the case and the remainder of the solvency problem is to be solved through other benefit cuts, substantial additional benefit cuts will have to be proposed on top of those the White House is now endorsing.

The Size of the Benefit Reductions Under the Pozen Proposal

The Pozen proposal would use price indexing to determine the benefits for “maximum earners,” people who currently make $90,000 or more a year. Lower-earners — the bottom 30 percent of earners, or those who make less than about $20,000 currently — would continue to have their benefits calculated under the current formula. Anyone whose annual earnings over his or her career averaged between $20,000 and $90,000 would get a benefit somewhere between the currently promised benefit and the benefit that would be provided under full price indexing.

Estimates of Mr. Pozen’s plan by the Social Security actuaries show that the plan’s benefit reductions (relative to the benefits scheduled under current law) would grow sharply over time.[9] These benefit cuts would grow from six percent for an average wage worker born in 1960 who retires in 2025, to 28 percent for an average-wage earner born in 2010 who retires in 2075.

As these figures indicate, the benefit cuts for someone at $59,000 a year are nearly as large as those for someone who makes $90,000, or $900,000, or even $9 million a year. (Note: benefits under the current benefit structure are the most appropriate frame of reference for a variety of reasons, as discussed in the Appendix. Most fundamentally, these are the benefit levels that are used to calculate the Social Security shortfall, which the President has said his proposals would help to close.)

President’s Plan is Not Balanced

Indeed, it may be argued that the President’s plan is not progressive enough. As noted, his plan would apply the same magnitude of benefit reductions to a worker whose annual earnings average $90,000 as to one whose annual earnings average $9 million. Someone making $60,000 annually would get about 85 percent as large a percentage benefit reduction as the individual who makes $9 million.

Other approaches would restore solvency with more balance between benefits and taxes, and also would take a more progressive approach to restoring solvency that ensures that people with very high incomes contribute significantly more than hard-pressed middle-class families. For example, the solvency plan designed by economists Peter Diamond of M.I.T. and Peter Orszag of the Brooking Institution would gradually raise the payroll tax cap from $90,000 to $105,000 and impose a 3 percent “legacy charge” on income above the payroll tax cap. It also would modestly raise the payroll tax rate. It includes several significant benefit reduction measures as well, but its benefit reductions are roughly half the size of the benefit cuts that Mr. Pozen has proposed. Moreover, the Diamond-Orszag plan, which also includes a poverty-level minimum benefit, closes 100 percent of Social Security’s shortfall, not 59 percent or 70 percent.

Similarly, a plan proposed by former Social Security Commissioner Robert Ball and introduced last fall by Rep. David Obey would raise the payroll tax cap gradually from $90,000 to $150,000 and preserve a scaled-back version of the estate tax, with the revenues from the estate tax being dedicated to Social Security. The Ball plan includes benefit trims, as well, but here, too, the benefit reductions for average workers would be much smaller than the benefit cuts such workers would face under the Pozen and White House proposals. These approaches ask instead for somewhat larger sacrifices from very high-income households, which have benefited extremely handsomely from the generous tax cuts of recent years.

APPENDIX: SHOULD BENEFIT CUTS BE COMPARED TO SCHEDULED BENEFITS?

The debate over Social Security is not improved by comparing benefits under various plans to current benefit levels adjusted only for inflation, or to “payable” benefits (the benefits that would be paid if no action were taken and Social Security became insolvent). There are several reasons why payable benefits, or current benefits adjusted only for inflation, are not the best standards to use in evaluating a proposal.

[1] All of these benefit reductions are relative to the benefits scheduled under the current-law formula. This measure is consistent with the benefit baseline used to describe the shortfall in Social Security that needs to be solved. This issue is discussed in more detail in the Appendix.

[2] The Center previously released an estimate that the President’s plan closed 59 percent of the solvency gap. That was based on the2004 Trustees Report, the report used to score the Pozen plan. This estimate is updated to reflect the assumptions in the 2005 Trustees Report.

[*] The White House appears to be defending its 70 percent claim by saying that its proposal would eliminate 70 percent of the projected deficit in the 75th year of the proposal. This is not the longstanding, widely accepted way of measuring the share of the long-term solvency gap that a Social Security proposal closes. The standard approach is to measure the percentage of the gap that a proposal would close over the next 75 years.

[3] The factors in question, known as the “PIA factors,” are set at 90 percent, 32 percent, and 15 percent and are applied to a worker’s average wages over his or her career when the worker’s Social Security benefits are calculated. The Pozen proposal would add a new factor and gradually reduce the 32 and 15 percent factors.

[6] Specifically, Table 2d of the actuaries memo shows that progressive price indexing would save $2.9 trillion in net present value over the next 75 years, or 1.36 percent of taxable payroll.

[7] Economists Peter Diamond and Peter Orszag have estimated that full price indexing would reduce benefits for disabled beneficiaries by 0.30 percent of taxable payroll over 75 years. This implies that the benefit reductions for disabled beneficiaries under “progressive price indexing” would save about 70 percent as much, or about 0.22 percent of payroll. The Social Security actuaries estimate that the Pozen proposal saves an amount equal to 1.36 percent of payroll over 75 years. Thus, roughly one-sixth of the total benefit reductions in the Pozen plan come from disabled beneficiaries. Peter Diamond and Peter Orszag, “Reducing Benefits and Subsidizing Individual Accounts: An Analysis of the Plans Proposed by the President’s Commission to Strengthen Social Security,” June 2002. 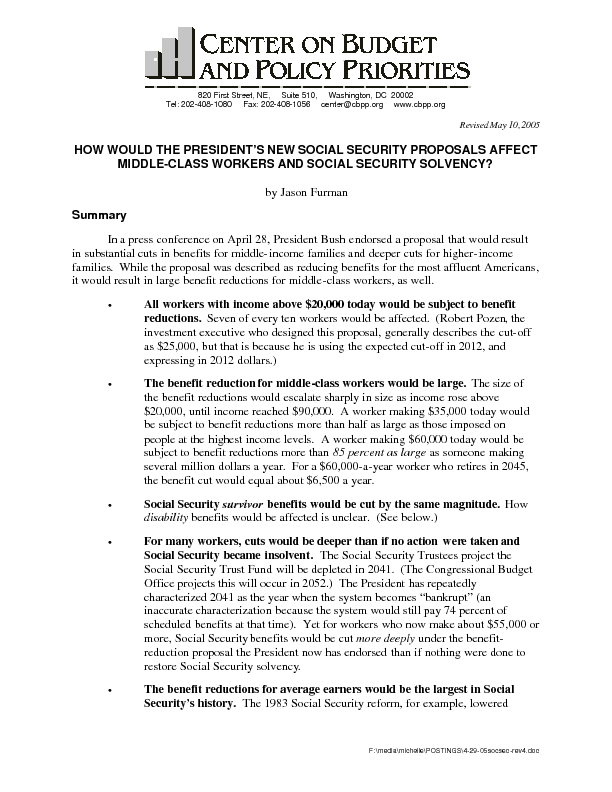