There are various indicators of how successfully an agency uses available Housing Choice Voucher resources to assist needy families. All of these indicators are important, but the significance and implications of each for families and agencies differ somewhat. Below is a glossary of key success and utilization indicators, followed by brief discussion of indicator data that are available, and how stakeholders may use them. (State and local housing agency data for some of these indicators are available on the Center’s “National and State Housing Fact Sheets and Data” web page.)[1]

Leasing: Voucher leasing is the measure of how many households an agency is assisting at any given time. It is the number of households that are using housing vouchers to rent units in a given month, or on average over the course of a year.

Lease-up rate: The voucher lease-up rate is the percentage of an agency’s “authorized housing vouchers,” whose number is set by the Department of Housing and Urban Development (HUD), that households are using to lease units (typically in a month or year). This number is the result of many rounds of new voucher allocations that HUD (at Congress’ direction) has implemented — some by a statutory formula and others by competitive award — over the more than 40 years that the program has been in existence. In recent appropriations acts, Congress has strictly prohibited the use of federal funds for vouchers that exceed an agency’s authorized cap (excepting agencies participating in the Moving to Work demonstration, which are exempted from this prohibition).

For instance, if a housing agency is authorized to administer 980 housing vouchers, and families are using 882 vouchers to lease units, then the agency’s lease-up rate is 90 percent (882 divided by 980). (Note: relatively few agencies lease up 100 percent of their authorized vouchers because it has been more than a decade since Congress provided them with sufficient funds to do so. As a result, this indicator has become less helpful in gauging agencies’ performance.)

Funds expenditure rate: Each year, HUD provides every housing agency an amount of budget authority to pay rental subsidies to landlords on behalf of participating households. An agency’s voucher funds expenditure rate is the share of its subsidy funding allocation that it spends to assist families with vouchers during the year. For instance, if, in a given year, an agency receives $2.5 million for voucher assistance and spends $2.4 million to assist families, its funds expenditure rate is 96 percent (2.4 million divided by 2.5 million). This indicator is the most important for assessing program performance in terms of how well funds are used to assist needy families because it measures the extent to which a housing authority received voucher assistance funds in a given year that it did not fully use.

HUD SEMAP utilization rate: HUD uses a combined indicator to assess agency performance under the Section 8 Management Assessment Program (SEMAP). This measure combines the voucher lease-up and funds expenditure measures: the SEMAP measure is the higher of an agency’s voucher lease-up and funds expenditure rates. In combining two factors, HUD’s SEMAP measure acknowledges several important realities about program administration. Frequently, for example, housing agencies do not receive enough funding to use all their authorized vouchers, and a performance measure that relied entirely on unit utilization thus would be unfair.

Reserve balance: Funding reserves are unspent voucher assistance funds that an agency received in prior years. The magnitude of an agency’s reserve balance is typically expressed as a percentage equal to the reserve amount divided by the agency’s annual renewal funding allocation. For instance, if an agency has $100,000 in funding reserves and received $1 million in voucher renewal funding in the current year, then its reserve level is 10 percent ($100,000 divided by $1 million). This is the best overall indicator of whether a public housing agency could assist more families by better utilizing existing funds; high reserve balances could be due to ineffective administration.

Under HUD’s financial management procedures, agencies hold a modest portion of reserves in their own account (“restricted net position” or RNP), and HUD holds an additional portion that agencies may draw on by request. It is prudent for housing agencies to maintain modest reserve balances as a hedge against unexpected events such as an atypical spike in rents or success rates (defined below) or an unexpected reduction in their annual funding allocation. The reserve level that is prudent depends in part on how large the agency is. For instance, high-performing, large agencies may maintain reserves equal to 4 to 6 percent of their annual funding, while it may be prudent for small agencies to keep larger reserve balances because small changes in leasing or costs can have a significant impact on their voucher budgets.

Success rate: An agency’s success rate is the percent of vouchers it has issued to families in a year that result in an actual lease and assistance contract with a landlord. When HUD last studied voucher success rates in 2000, the national average voucher success rate in metropolitan areas was 69 percent. This means almost 7 out of 10 families newly issued vouchers were able to lease a unit using their vouchers.[2]

The study also found that success rates differed significantly across the country due to differences in housing agency management and local rental markets: 9 out of 10 families successfully used their vouchers in about 12 percent of agencies, while at the other extreme only about half of families issued vouchers were successful in 15 percent of agencies. While these numbers may have shifted over time, there likely remains significant variation in voucher success rates by agency and location.

Recent and historical data for some of these indicators are available on the Center’s “National and State Housing Fact Sheets and Data” page,[3] including, for every state and local housing agency:

Those with a strong understanding of the housing voucher program may also wish to review the data that HUD makes available in its “HCV Two-Year Projection Tool.”[5] This tool is designed to assist housing agencies in administering their programs effectively, but it offers a range of data that are useful to others, too.

These data may be useful for answering basic questions of interest, such as:

[5] This tool is available at https://www.hud.gov/program_offices/public_indian_housing/programs/hcv/Tools. 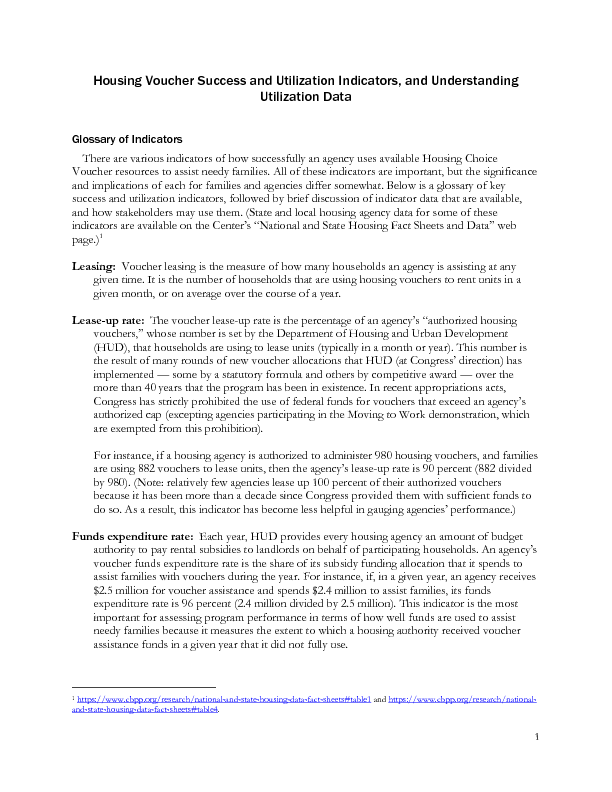