House Republican leaders announced yesterday the next steps in their plan to impose deep cuts in non-security discretionary (annually appropriated) programs.  Under the plan, non-security programs would shrink, on average, by 15.4 percent below current funding under the continuing resolution (which expires on March 4) and 19.4 percent below what President Obama proposed for fiscal year 2011.  Programs and activities that face the risk of such cuts include funding for K-12 education, the Federal Bureau of Investigation, the Centers for Disease Control, and food safety inspections, and a number of programs that serve low-income children, seniors, and people with disabilities.

House Budget Committee Chairman Paul Ryan announced that he will file (pursuant to the authority that the House gave him when it adopted its rules on January 5) a “302(a) allocation” limiting security discretionary funding (through the Defense, Homeland Security, or Military Construction-Veterans Affairs appropriation bills) for fiscal year 2011 to no more than $635 billion (not including funding for the wars in Iraq and Afghanistan) and limiting non-security funding (through the other nine appropriation bills) to no more than $420 billion. 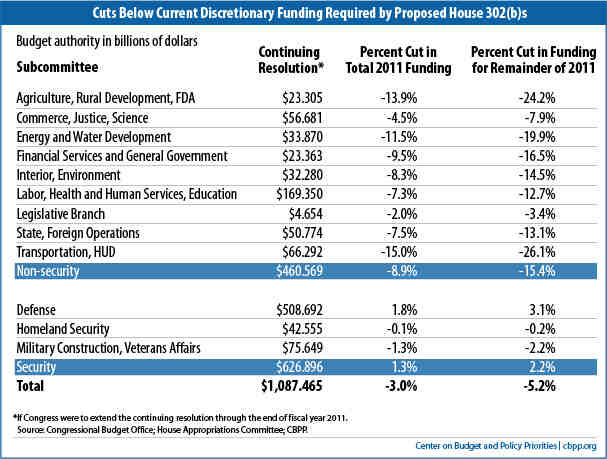 The $420 billion allowed for non-security programs is $41 billion (or 8.9 percent) below the Congressional Budget Office’s $461 billion estimate of the cost of simply extending the continuing resolution through the end of the fiscal year (which ends September 30).  But, assuming Congress adopts new appropriation legislation that takes effect on March 5, funding for non-security programs would have to shrink by 15.4 percent below the continuing resolution’s level for the rest of fiscal year 2011 in order to conform to the House plan.  (The arithmetic is simple: a 15.4 percent cut for the remaining .575 year [210 days/365 days] would produce funding for the year that is 8.9 percent lower.)

Since House leaders clearly do not intend to raise the rate of funding for non-security programs after the end of this year, the 15 percent reduction for the rest of this year represents a more accurate measure of the cut’s true effect.  (The Republican Study Committee and some other House members are calling for much deeper cuts either this year or in following years. [1])

Some media reports have incorrectly suggested that the cuts in non-security funding under Ryan’s allocations are much smaller than the $100 billion cut that House GOP leaders previously proposed.  Part of the confusion comes from comparing the $100 billion cut with the $32 billion to $35 billion reduction in total discretionary funding below current funding levels.[2]  But the $100 billion cut was to come in non-security discretionary funding alone, and it was measured from the level that the President proposed.  Under the new Ryan plan, the reduction in non-security funding for 2011 would actually be $63 billion below what the President proposed for 2011 (and $41 billion below what would be provided for the year if Congress extends the current continuing resolution).  This $63 billion in cuts would be squeezed into the final 7 months of fiscal year 2011.  If the reductions required to comply with Ryan’s allocation were in effect for all of 2011 (i.e., if five months of the fiscal year had not already gone by), funding for non-security programs for the year would be close to $100 billion below what the President proposed.

The $635 billion proposed for security programs represents a 1.3 percent increase compared to CBO’s estimate of extending the continuing resolution for the rest of the year.  To hit that level for the year, funding would have to rise 2.2 percent above the continuing resolution rate.  That higher funding rate would be 1.5 percent below what the President proposed for security programs for 2011.

Also yesterday, House Appropriations Committee Chairman Harold Rogers released his proposed “302(b) suballocations,” which divide Ryan’s aggregate total for discretionary funding among the 12 appropriations subcommittees. [3]  Not every non-security subcommittee would have to cut funding for the rest of the year by the same 15.4 percent (nor would every program within each subcommittee’s jurisdiction have to be cut by the same amount).  For instance, appropriations under the Legislative Branch subcommittee, which funds House and Senate staff and operations, would face only a 3.4 percent cut.  But, appropriations under the Agriculture, Rural Development, Food and Drug Administration, and Related Agencies Subcommittee, which fund food safety inspections, important conservation programs, and rural housing assistance, would face a 24.2 percent cut.

The largest amount of non-security funding falls under the Labor, Health and Human Services, Education, and Related Agencies subcommittee.  Its funding covers a wide range of important programs, including aid to state and local governments to help pay for improvements in K-12 education, Head Start, the Centers for Disease Control, medical research by the National Institutes of Health, meals-on-wheels, mine safety inspections, job training, and administration of Social Security benefits.  Overall, funding under its jurisdiction would face a 12.7 percent cut below what the continuing resolution is now providing.  While the subcommittee could cut some of those programs less, it would have to cut others more.  And it won’t be able to protect all of the important programs under its jurisdiction.

On another source of confusion: the fact sheet that Ryan released included the statement — one that House GOP leaders have often repeated in recent months to justify their non-security discretionary cuts — that the proposed cuts would just take “this category of spending back to pre-stimulus , pre-bailout 2008 levels….”   That suggests the cuts should come easily because current funding is “bloated” with stimulus and bailout funding.  That, however, is simply not true.  The funding for “bailouts” — presumably, Treasury Department efforts to shore up the financial system under the Troubled Asset Relief Program and other authorities — was mandatory funding.  It has nothing to do with discretionary funding.  And while the American Recovery and Reinvestment Act of 2009 included a large increase in discretionary funding, that funding was in fiscal year 2009 budget authority.[4]  ARRA’s expenditures (or outlays — i.e., what is counted when the Treasury writes checks to fulfill the obligations incurred through appropriations of budget authority) do affect fiscal year 2011 outlay levels, but none of the funding (or budget authority) under the current continuing resolution is due to ARRA.

In other words, despite the rhetoric about returning to “pre-stimulus, pre-bailout” funding levels, the current level of non-security discretionary funding — which the House plans to cut by 15.4 percent — does not include any stimulus or bailout funding that could be reduced to reach that target.  The proposed cuts have nothing to do with stimulus or bailout funding.

[3] The Appropriations Committee will apparently vote on these suballocations next week.

[4] An ARRA provision that increased Food Stamp payments was scored as having a discretionary cost in fiscal years 2009 through 2013 because the provision was included in the part of the bill that included discretionary appropriations; but the program is a mandatory one, and the current costs of that provision are not counted as discretionary and are not reflected in the discretionary funding levels in the continuing resolution, nor are they subject to Ryan’s proposed limit.