The Child Tax Credit (CTC) legislation that the House is slated to consider this week has misguided priorities:  it would make many relatively affluent families better off while letting millions of low-income working families become poorer.

The bill permanently alters the CTC by extending it higher up the income scale so that more families with six-figure incomes can benefit from it, while failing to make permanent a key CTC improvement for working-poor and near-poor families that is slated to expire at the end of 2017.  As a result, a married couple with two children making $160,000 a year would receive a new tax cut of $2,200 in 2018 under the bill.  But a single mother with two children who works full time throughout the year at the minimum wage of $7.25 an hour (which House leaders oppose raising) and earns just $14,500 would lose $1,725.  Her CTC would disappear altogether (see Figure 1).

The bill also indexes the current maximum credit of $1,000 per child to inflation, but that would benefit only those with incomes high enough to receive the maximum credit amount.

Middle-income families with children would get a small benefit from the bill’s indexing provision.  But the big winners would be the more-affluent families who would become newly eligible for the CTC.  The losers would be millions of low-income families who are doing exactly what policymakers often say they want these people to do — working, even at low-wage jobs.  Census data show that letting the Child Tax Credit improvement for low-income working families expire after 2017 would push 12 million people — including 6 million children — into or deeper into poverty.

The bill’s CTC expansions would cost $115 billion over ten years.[1]

Policymakers established the CTC on a bipartisan basis in 1997 to help defray the high costs of raising children and substantially expanded the credit in 2001 as part of the Bush tax cuts.  Yet the Child Tax Credit, as established by those pieces of legislation, had a large hole — most working-poor families with children were either ineligible for the credit altogether or received only a partial credit, because their wages were too low for them to qualify for the full credit.  The very working families that most needed the credit to help with the costs of raising their children were partially or entirely shut out.

Policymakers made substantial progress in addressing this flaw in 2009.  They did so by lowering the level of family earnings at which the CTC begins to phase in to $3,000, so that families with very low earnings could get a partial credit, and so a family with two children could start to receive the full credit when its earnings reached $16,333 (rather than a considerably higher level).  This enabled the CTC to reach more working-poor families while boosting the credit for many near-poor working families that had been receiving only a partial credit.  The 2009 law also increased the Earned Income Tax Credit (EITC) for families raising three or more children and provided more marriage-penalty relief in the EITC.

In 2010, policymakers extended these CTC and EITC improvements, along with the Bush tax cuts, and they thus were scheduled to expire together at the end of 2012.  As their price for agreeing to extend the CTC and EITC improvements for working families in 2010, however, Republican negotiators secured a hefty increase in the amount that the heirs of the wealthiest estates could inherit tax free.  This change benefited the heirs of the estates of the wealthiest one-third of 1 percent of Americans who die.[2]  The 2012 “fiscal cliff” deal then made this generous tax cut for the biggest estates permanent (along with the bulk of the Bush tax cuts), even as it extended the CTC and EITC improvements for low- and moderate-income working families only through 2017. 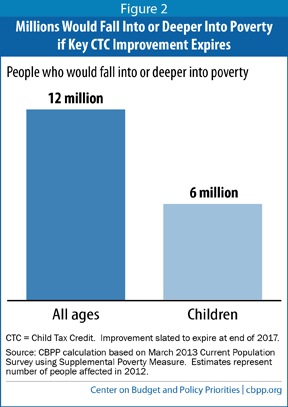 The CTC legislation coming to the House floor has three notable features: 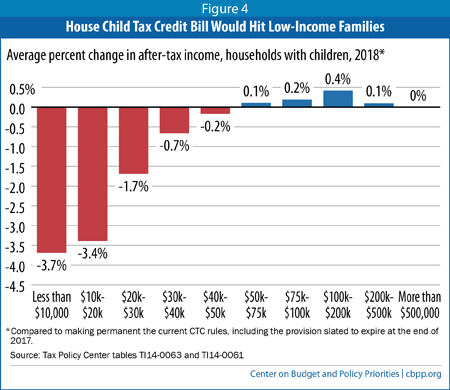 In sum, the bill’s big losers would be lower-income working families with children, even as its big winners are more affluent families, as Figure 3 shows.

[1] Joint Committee on Taxation (JCT) score of H.R. 4935 as voted on and passed by House Ways and Means Committee, https://www.jct.gov/publications.html?func=startdown&id=4625.  The bill the House is scheduled to consider adds an offset, not yet scored by JCT, which would decrease the net cost of the bill.