The President’s proposal to raise the federal excise tax on tobacco products and use the additional revenue to expand preschool education, which he included in both his fiscal year 2014 and 2015 budgets, could achieve the dual goals of reducing the number of premature deaths due to smoking and raising an estimated $78 billion over ten years to finance early childhood education.

Tobacco taxes are a proven strategy to reduce smoking, particularly among teenagers and low-income people.  Given the high health costs of tobacco use, reducing smoking rates would lead to substantial health gains.  Moreover, youth and lower-income people would benefit disproportionately from improved health, partially offsetting the regressivity of tobacco taxes, and lower-income children and families would be the primary beneficiaries of the expanded availability of early childhood education that these tax revenues would finance.

Smoking Causes One in Five Deaths in the United States

Cigarette smoking is the leading cause of preventable disease in the United States.  According to the Centers for Disease Control and Prevention, it accounts for about 443,000 deaths each year, or about 20 percent of all deaths.[2]  (Some 50,000 of these premature deaths are from secondhand smoke.)  The Surgeon General estimates that approximately half of today’s 44.8 million smokers will die prematurely from smoking-related diseases.[3] 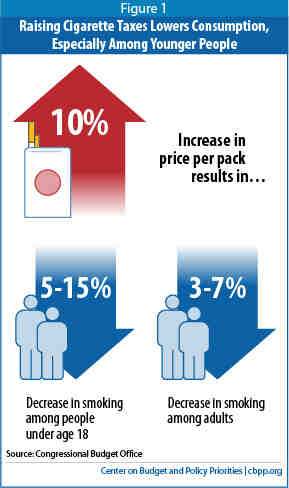 On average, a lifetime smoker will die about seven years before a non-smoker with similar characteristics, such as education level, income, and sex.

Smoking is a habit that tends to start early in life.  Four in five adult smokers started before they were 18; only one in 100 started after age 26.  A primary reason that cigarette taxes are so effective is that young people are particularly sensitive to price increases.  The Congressional Budget Office (CBO) summarizes the existing research and concludes that a 10 percent increase in cigarette prices will lead people under age 18 to reduce their smoking by 5-15 percent.  Among adults over 18, CBO concludes, the decline would be 3-7 percent (see Figure 1).  Taking the mid-point of the estimate for youth suggests that each 1 percent price increase leads to roughly a 1 percent decrease in youth tobacco consumption.  (Approximately half of the decline in smoking is due to fewer smokers (people either quitting or not starting to smoke), while the other half is due to fewer cigarettes consumed by people who smoke.)

The President proposes raising the federal cigarette tax from $1.01 to $1.95 per pack in 2015 and indexing it for inflation thereafter.  CBO has estimated that a $1-per-pack increase, which is similar to what the President has proposed, would result by 2021 in 8 percent fewer smokers aged 18-24, compared tocurrent law.  This implies that among 18-24 year olds who will be smokers if the tax is not raised, 4 percent fewer will die prematurely from smoking-related diseases if the President’s proposal is enacted. [9]

CBO also estimates that there would be 2.6 million fewer adult smokers over age 18 in 2021 as a result of a $1-per-pack increase, or 6 percent less than under current law.[10]

Impact of Tobacco Tax Is Less Regressive Than Many Believe

Some opponents note that a tobacco tax increase would be regressive.  They point out that low-income people have higher smoking rates:  29 percent of poor adults smoke, compared to 18 percent of non-poor adults.[11]  Also, expenditures for cigarettes account for a greater share of lower-income households’ budgets.

If tobacco only harmed smokers, and if people were fully aware of its health costs, the rationale for tobacco taxes would be less powerful.  However, several considerations support taxation as a mechanism to reduce tobacco use.  First, its numerous health risks impose costs on non-smokers as well as smokers, both because they raise overall U.S. health care spending[12] and because even secondhand exposure to cigarette smoke raises the risk of cardiac disease.[13]  In addition, evidence suggests that people do not fully account for the health risks of smoking and that many smokers would like to quit.[14]
Policymakers should therefore balance understandable concerns about regressivity with the following facts: 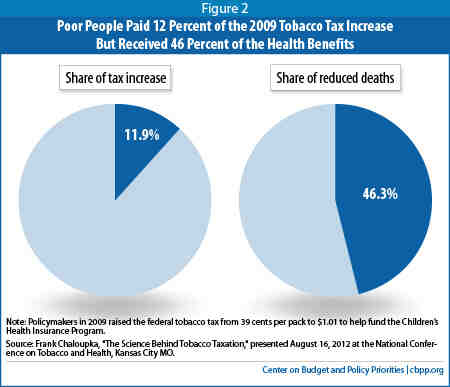 These three factors can help mitigate the reduced enjoyment from smoking that some low-income people facing an increased tobacco tax might experience.  It is also worth noting that on average low-income smokers tend to respond to tobacco tax increases by reducing their consumption of cigarettes, rather than by spending more on cigarettes and reducing their consumption of other goods.  One study found that, on average, the lowest-income quintile reduces cigarette consumption by 1 percent for every 1 percent price increase.[21]  This implies that when prices rise, this group would spend the same total amount for fewer cigarettes (rather than spend more on the same number of cigarettes).  Obviously, not all members of the group respond in the same way.  But to the extent that a person curbs his or her consumption or stops smoking altogether, his or her cash burden is smaller than it would be if he or she continued to smoke at the same level after the tax is imposed.

Decline in Tobacco Revenue Over Time Would Signal Policy’s Success

The ultimate goal of raising cigarette taxes is to improve public health and extend lives.  If tobacco revenues decline over time because fewer people are smoking, this would indicate that the policy is working.

Some have used the likely decline in tobacco revenues to argue against using them to finance preschool education.  For example, a tobacco industry representative said:  “With cigarette sales declining year to year, the stability of this funding source is unreliable and therefore will likely not produce the $78 billion the President needs to fund the preschool education program over the next decade.”[22]

However, the President’s proposal takes into account this positive behavioral response and assumes that revenue falls at the end of the ten-year budget window.[23]  Even so, the estimated revenue is sufficient to pay for the proposal over ten years.

Tobacco revenues are expected to continue falling beyond the budget window.  This, too, would represent a policy success and a public health gain.  Policymakers can revisit the financing mechanisms toward the end of the ten-year period.  They could elect to raise the tobacco tax further at that time (particularly given that incomes will likely be higher and, therefore, the cost of cigarettes per hour of work lower).  Or, policymakers may prefer to add another financing source.  But they should not let the projected decline in tobacco revenues tip the balance against a policy that will improve public health and extend lives, while helping to finance an important national need and thereby make a sound investment in the future workforce.

[1] Krista Ruffini co-authored the original version of this paper.

[9] CBO’s considered only how a higher cigarette tax would affect the number of smokers.  Its analysis did not model health and budgetary effects from smokers consuming fewer cigarettes.  Therefore, CBO’s projected health gains are likely a lower bound on overall health gains.

[10] Under current law, CBO projects that the fraction of adults who smoke will decrease from 19 percent to 16 percent by 2021.  Incorporating population growth projections, 16 percent of all adults in 2021 corresponds to 43 million adult smokers.