Millions of low-income adults with disabilities and serious illnesses get health coverage through Medicaid. Many qualify because they receive Supplemental Security Income (SSI), but millions more are covered under the Affordable Care Act’s (ACA) Medicaid expansion and longstanding coverage for low-income parents.

Now, the Trump Administration is allowing states to take away Medicaid coverage from beneficiaries who don’t work or participate in work-related activities (e.g., job training or volunteer work) for a specified number of hours each month, other than those who are 65 or older, pregnant, or qualify because they are receiving SSI. But nearly three-fifths of all non-elderly adult Medicaid enrollees with disabilities, or almost 5 million people, do not receive SSI. Thus, work requirements will still have severe — and likely disproportionate — impacts on people with disabilities.

The Administration has already approved work requirement policies in several states, and additional proposals are pending. Most of these policies require enrollees to document that they work or engage in other work activities for at least 80 hours per month, unless they prove that they qualify for limited exemptions. In Arkansas, the first state to implement such a policy, over 18,000 Medicaid beneficiaries lost coverage in 2018 due to the new requirements.

The Administration’s policy requires states to exempt people deemed “medically frail” and recommends exempting those with an acute medical condition that keeps them from working. But many people with disabilities likely won’t qualify for an exemption or won’t be able to prove that they do. That appears to be the case in Arkansas, where the number of Arkansans losing Medicaid coverage exceeds the policy’s presumed target population — namely, people who are neither working nor qualify for an exemption.

Many People With Disabilities Could Be Subject to Work Requirements

In states that have taken up the ACA’s Medicaid expansion, Medicaid coverage is now available to adults with incomes below 138 percent of the poverty line ($16,753 for an individual in 2018). This expansion has been critically important to millions of poor individuals with physical and mental disabilities and illnesses who are not receiving federal disability benefits, as well as some who receive Social Security Disability Insurance benefits but must wait two years for their Medicare benefits to kick in. A study of Medicaid expansion enrollees in Michigan, for example, found that 23 percent had physical impairments resulting in significant functional limitations, and 20 percent had such mental impairments.

The Administration’s policy explicitly allows states to include such individuals in their work requirement policies, noting: “[The Centers for Medicare & Medicaid Services] recognizes that adults who are eligible for Medicaid on a basis other than disability . . . will be subject to the work/community engagement requirements [but] . . . may have an illness or disability as defined by other federal statutes that may interfere with their ability to meet the requirements.”

Medicaid beneficiaries with disabilities or illnesses are far likelier than other beneficiaries to be unemployed, sporadically employed, or to work less than full time, which means many will lose coverage unless they can show they are exempt. In Michigan, these groups were much more likely to be unemployed than other enrollees. Nationally, studies estimate that about one-third of all non-working, non-elderly adult Medicaid enrollees not receiving SSI report that they are unable to work due to a disability.

The work requirements approved so far exempt people who are medically frail and those who can’t work because of a disability or medical condition, but these exemptions won’t keep beneficiaries from falling through the cracks. First, the exemptions are narrow, and many people won’t qualify as medically frail. Just 12 percent of Arkansas Medicaid beneficiaries who were subject to the work requirement in October qualified as medically frail. Yet nearly 30 percent of Arkansas beneficiaries who are not working and do not qualify for a non-health-related exemption (i.e., they aren’t 50 or older, a student, or a caregiver) report having one or more serious health limitations, and 17 percent report having two or more such limitations.

Second, even people with disabilities who should qualify for exemptions may struggle to prove that they do so. Obtaining physician testimony, medical records, or other required documents may be difficult, especially if beneficiaries don’t have health coverage while seeking to prove they are exempt. Red tape and paperwork requirements have been shown to reduce enrollment in Medicaid across the board, and people coping with serious mental illness or physical impairments may face particular difficulties meeting these requirements.

The experience of other programs shows that people with disabilities are disproportionately likely to be sanctioned for not complying with work requirements, even though many of them qualify for exemptions. Effectively, people with disabilities may become collateral damage in a state’s attempt — likely an unsuccessful one — to increase employment among the small minority of adult Medicaid enrollees who are not already working, or are ill or disabled, caregivers, or in school.

The Administration’s policy puts the onus on states to comply with the Americans with Disabilities Act (ADA) and other legislation protecting people with disabilities, including providing “reasonable modifications” to “ensure that individuals with disabilities are not denied Medicaid for inability to meet [work] requirements.” But it provides few specifics about how they must do so. The policy also makes clear that states need not provide any new services to support people facing work requirements, and if they do provide them, they can’t use federal Medicaid funds to help defray the costs. Arkansas is relying almost exclusively on exemptions to the work requirement to protect beneficiaries with disabilities, which puts the burden on people who have disabilities but don’t qualify for an exemption to request other kinds of reasonable modification without informing them that such modifications may be available.

Losing Coverage Will Worsen Health — and Could Impede Employment

Losing coverage worsens health for all groups, which is why physician groups like the American Medical Association, the American Academy of Family Physicians, the American Academy of Pediatrics, and others oppose Medicaid work requirements. But the resulting coverage losses will be especially harmful to people with disabilities and serious illnesses, who typically need regular care to manage their conditions. Coverage interruptions lead to increased emergency room visits and hospitalizations, admissions to mental health facilities, and health care costs, research has shown.

And by reducing access to health care, Medicaid work requirements will likely impede employment among people with disabilities. These policies set an “impossible standard,” explains The Arc, a leading advocacy organization for people with intellectual and developmental disabilities: “Many people with serious health conditions require access to health care services to . . . maintain their health and function. . . . Requiring individuals to work to qualify . . . would create a situation in which people cannot access the services they need to work without working — setting an impossible standard.”

In arguing that work requirements will advance economic mobility, the Administration cited Medicaid’s work support programs for people with disabilities, but the two approaches couldn’t be more different. Medicaid’s employment support programs are voluntary and give people who want to work the opportunity to do so by helping them gain the skills they need to find and keep a job. Medicaid buy-in programs likewise are voluntary and allow working people with disabilities to buy into Medicaid so they can stay covered after their earnings exceed Medicaid eligibility levels. The Administration’s policy on work requirements, by contrast, makes clear that states don’t have to provide supportive services such as transportation or job training, and work requirements will likely result in the loss of the support for work that health coverage provides.

This lack of work supports suggests that the Administration’s policy is not really aimed at improving economic mobility but instead reflects the Administration’s view that Medicaid coverage should not have been expanded to low-income adults in the first place. That’s a view that Congress rejected on a bipartisan basis last year — and one that would cause millions of people with disabilities, as well as other low-income adults, to lose coverage. 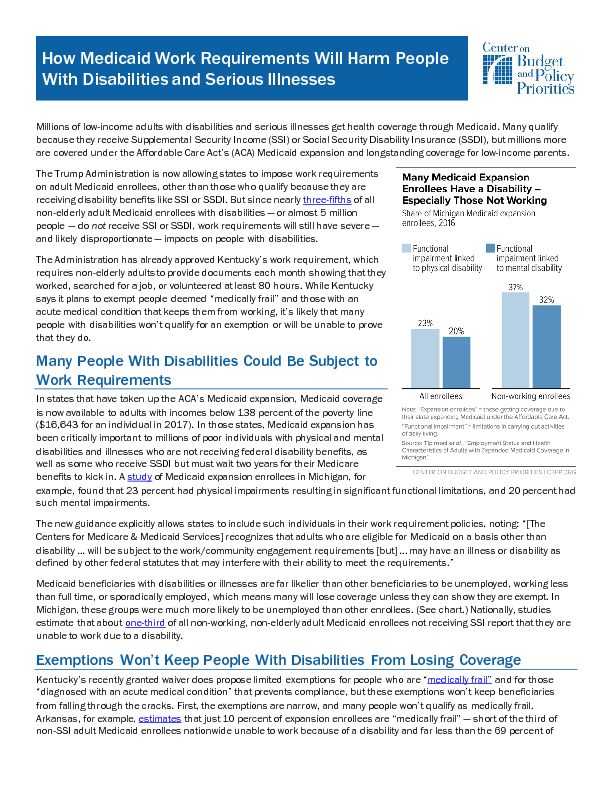