House Republican leaders plan to vote this week on a measure to raise the threshold for the Affordable Care Act’s (ACA’s) employer mandate from 30 to 40 hours.[1] The ACA requires employers with at least 50 full-time-equivalent workers to offer health coverage to employees who work 30 or more hours a week or pay a penalty.[2] Critics charge that the 30-hour threshold has caused employers to shave workers’ hours, but raising it to 40 hours would lead to fewer hours of work for employees and more part-time work — the exact opposite of what the rhetoric about “restoring” the 40-hour work week implies.

There’s no indication that the ACA has caused a significant shift toward part-time work, contrary to the claims of critics. The number of part-time workers who would rather be working full time has returned to pre-recession levels. And a review of the published literature finds that the ACA has had virtually no effect on hours of work.[3]

More important, raising the law’s threshold from 30 hours a week to 40 hours would make a shift toward part-time employment much more likely — not less so. That’s because only a small share of workers today (7 percent) work 30 to 34 hours a week and thus are most at risk of having their hours cut below health reform’s threshold. In comparison, 45 percent of employees work 40 hours a week, and another several percent work 41 to 44 hours a week. Thus, raising the threshold to 40 hours would place many more workers at risk of having their hours reduced. In short, it’s the proposed legislation, not the ACA, that threatens the traditional 40-hour work week the legislation’s sponsors say they want to protect.

Contrary to early speculation, the ACA has not caused a significant shift to part-time work. The share of part-time jobs rose sharply during the Great Recession, as it does in every recession; employers cut workers’ hours when demand for the firm’s products or services weakens. But that share has dropped again during the ensuing recovery, with the ACA having no discernable impact.

Since the ACA became law in March 2010, all of the overall increase in civilian employment has been among people who usually work full time.[4] Part-time workers now represent 17 percent of total employment — the same as before the recession and well below the post-recession peak of 20 percent.

The share of involuntary part-timers — workers who’d rather have full-time jobs but can’t find them — tells a similar story. If health reform’s employer mandate had distorted hiring practices in the way critics claim, we’d expect the share of involuntary part-timers to increase, or decline less than expected. Instead, as Figure 1 shows, it is down about four percentage points from its peak and has returned to its pre-recession level.

Finally, an analysis of data from the Current Population Survey, published in Health Affairs, finds little evidence that the ACA has caused increases in part-time employment.[5]

Raising the cutoff for the employer mandate from 30 hours a week to 40 hours would make a shift toward part-time employment more likely — not less so. Since 40 hours is the typical work week, employers could easily cut back many employees from 40 to 39 hours so they wouldn’t have to offer them health coverage.

The result would be less employer-sponsored health coverage — and thus higher federal spending for Medicaid and premium tax credits. In addition, the penalties collected from employers that fail to meet the requirement to offer coverage would fall. Raising the threshold to 40 hours would increase budget deficits by $18.6 billion over 2019-2028, according to the Congressional Budget Office.[6]

As Figure 2 shows, only about 7 percent of employees work 30 to 34 hours a week (that is, at or modestly above the health reform’s 30-hour threshold), but 45 percent of employees work 40 hours a week and would be vulnerable to cuts in their hours if the threshold rose to 40 hours.[7] The result would be fewer people with employer-sponsored insurance, more people seeking subsidized coverage, and more people uninsured.

[7] Bureau of Labor Statistics, Labor Force Statistics from the Current Population Survey, persons at work in agriculture and nonagricultural industries by hours of work, http://www.bls.gov/cps/cpsaat19.htm. 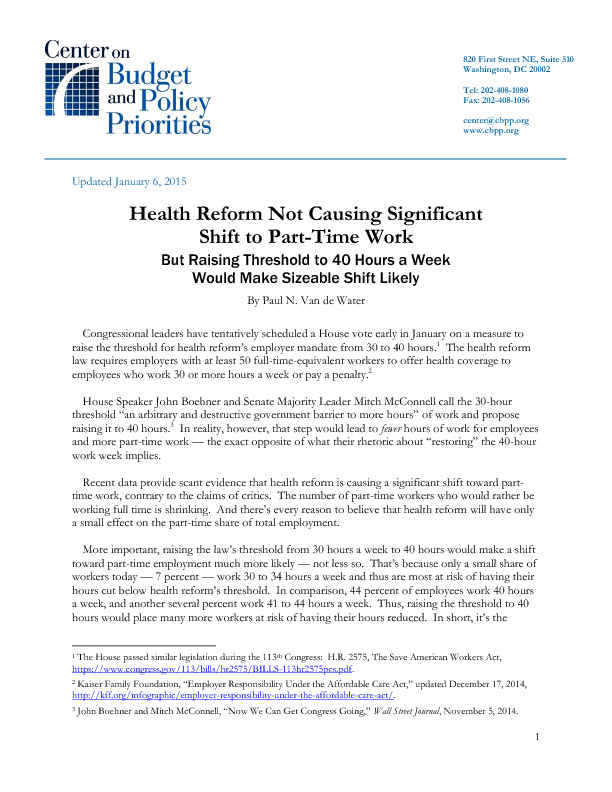