House-Passed Bill Would Apply to States with at Least 8.5 Percent Unemployment

PDF of this report (6pp.)
Image

On September 22, the House passed H.R. 3548, the Unemployment Compensation Extension Act of 2009, by an overwhelming bipartisan majority of 331 to 83. This legislation, which if enacted would provide additional weeks of unemployment insurance benefits in states with the highest unemployment rates, is an appropriate response to the continuing harsh conditions in the labor market.

The American Reinvestment and Recovery Act (ARRA) provides additional weeks of unemployment insurance (UI) benefits to workers who are unable to find a job before their regular, state-funded benefits run out (typically after 26 weeks). ARRA provides the greatest number of extra weeks in states with the highest unemployment rates, and where, therefore, it is likely to be hardest to find a new job. Under ARRA, all states qualify for a minimum of 20 weeks of Emergency Unemployment Compensation (EUC) for workers who have exhausted their regular benefits, but states where the unemployment rate is 6 percent or higher qualify for 33 weeks of EUC.

In some states, workers who exhaust their EUC qualify for additional weeks of benefits under the permanently authorized Extended Benefits (EB) Program, which the federal government and the states jointly fund. Thirty-six states and the District of Columbia have adopted an optional “trigger” for their EB programs under which workers qualify for 13 weeks of EB if the state’s unemployment rate is 6.5 percent or more, and for 20 weeks of EB if it is 8 percent or more.[2]

The House bill would provide an additional tier of 13 weeks of EUC for states with an unemployment rate of 8.5 percent or higher. It is deficit-neutral; the legislation would cover the cost by extending for another year the federal surcharge on the Federal Unemployment Tax Act (FUTA) tax collected from employers. The FUTA surcharge was enacted in 1976 and has been renewed regularly ever since.

Evidence is mounting that the recession that began in December 2007 is coming to an end (or might recently have ended ), but that is cold comfort to those struggling to find a job in a labor market that is likely to remain harsh until well after the recovery is underway. [3] As Federal Reserve Chairman Ben Bernanke said recently, “even though from a technical perspective the recession is very likely over at this point, it’s still going to feel like a very weak economy for some time as many people will still find that their job security and their employment status is not what they wish it was.”[4]

Recent monthly employment reports show little evidence that the emerging economic recovery is reviving the job market. To be sure, the labor market is no longer in free fall, as it was at the beginning of the year. But even as economic activity is picking up, employers remain reluctant to hire, and people who want to work remain discouraged about their prospects of finding a job.

Two statistics in particular highlight the plight of job seekers in the current labor market. 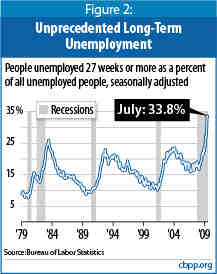 The extra weeks of benefits and other UI provisions in ARRA have helped millions of unemployed workers weather the recession better than they otherwise would have. The additional UI benefits are also one reason why ARRA has significantly lessened the decline in economic activity in this recession and will significantly boost the recovery over the next year or so.[5] Nevertheless, the recession has been long and deep. As a result, people are beginning to exhaust their benefits.

In August 2009, just over half (52 percent) of those receiving UI exhausted their regular benefits and became reliant on the first tier of EUC benefits available in all states. That is the highest exhaustion rate for regular benefits in the program’s history, according to NELP. The UI provisions of ARRA are scheduled to expire at the end of this year, but with the labor market still so weak and exhaustions of regular UI benefits at such a high rate, there will continue to be a strong need for emergency benefits in 2010.

But policymakers face an even more immediate problem than renewing ARRA’s UI provisions: the plight of people who are exhausting their regular and extended UI benefits. By the end of this month more than 400,000 people will have exhausted their federal extended benefits (EUC and EB), according to NELP; 1.3 million will have exhausted them through the end of the year. That is the problem the bill that just passed the House addresses.

[2] Because the EB program’s default triggers are relatively high, in past recessions the program has not activated in many states even with elevated unemployment. ARRA temporarily provided full federal funding for EB, which made it more attractive for states to choose an optional trigger that is more likely to activate the program.

[3] The widely recognized arbiter of when recessions begin and end is the Business-Cycle Dating Committee of the National Bureau of Economic Research, a non-governmental organization. The official announcement often comes many months after the official beginning or end of the recession. In an extreme example, the announcement that the last recession ended in November 2001 was not made until July 2003.

[4] “A Year in Turmoil: Fed Chairman Ben Bernanke Reflects on the Stabilization of the Financial System Since the Events of Last September,” uncorrected transcript, The Brookings Institution, September 15, 2009, p. 36, at http://www.brookings.edu/~/media/Files/events/2009/0915_financial_crisis/20090915_bernanke.pdf.

[6] South Carolina qualifies for 13 weeks of EB under a different trigger but would qualify for 20 weeks under the optional trigger most states have adopted.