The Toomey plan from Republican negotiators on the deficit-reduction "supercommittee" would produce only a modest increase in revenues — about $300 billion over ten years, relative to a baseline that assumes Congress extends all of the Bush tax cuts.  But it would accomplish this through what appears to be a substantial shift in tax burdens from households at the top of the income scale to low- and middle-income households.

That shift reflects the plan's two main components:  1) a 20 percent reduction in marginal tax rates below the levels under the Bush tax cuts (so that, for example, the top income tax rate would be 28 percent rather than the Bush 35 percent); and 2) a reduction in tax expenditures that is reportedly based on a plan advanced by Harvard economist Martin Feldstein and others.[1]  The first component — the large reductions in tax rates — would cut taxes disproportionately for high-income people; the second component would raise taxes disproportionately on lower- and middle-income people (that would be the effect of the basic Feldstein proposal, as Feldstein has acknowledged).  The combined result of such a package would be tax increases for lower- and middle-income people to finance further tax cuts (beyond those that the Bush tax cuts already provide) for wealthy people, with a small contribution to deficit reduction.[2]

Moreover, by locking in tax rates that are lower than the Bush rates and using most of the revenue from tax expenditure reform to pay for those rate reductions, the plan would effectively take both tax reform and the scheduled expiration of the Bush tax cuts off the table for the future rounds of deficit reduction that policymakers will need to make.[3]

Rate-Cut Proposal Would Disproportionately Benefit the Most Affluent

The plan calls for cutting all marginal tax rates by 20 percent below the levels established by the Bush tax cuts.  The rates would be as follows:

The fact that the plan would cut all rates by an equal percentage does not mean the cuts would affect all income groups equally.  In reality, the rate cuts would benefit high-income people much more than middle- or lower-income people, both in the dollar amount of their tax cuts and in the percentage increase in their after-tax incomes.  There are two reasons why. 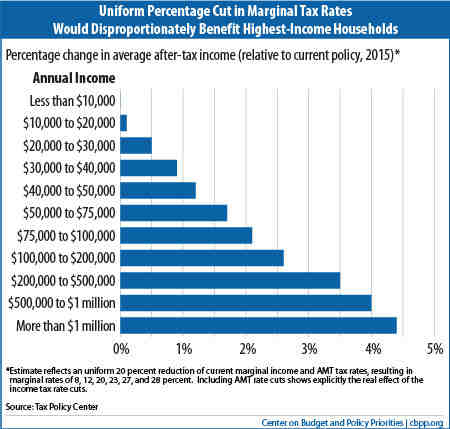 The Urban-Brookings Tax Policy Center recently estimated the effects of a 20 percent reduction in current marginal tax rates in the manner of the Toomey proposal.  (The TPC analysis examines the rate cuts by themselves; it does not include accompanying changes in tax expenditures.)  The Tax Policy Center found that the average individual who makes more than $1 million a year would receive an average tax cut of $92,000 — 100 times as much as the benefit that the average family earning between $50,000 and $75,000 would receive.  The proposal would boost the average millionaire's after-tax income by 4.4 percent, compared to a 1.7 percent increase for the average family earning between $50,000 and $75,000 (see chart).  (These amounts are in addition to the tax cuts that people would receive from extension of the Bush tax cuts.)

In short, the proposed tax-rate cut would be quite regressive, on top of the already regressive (and costly) Bush tax cuts.

Proposal to Limit Tax Expenditures Is Also Regressive Unless Modified

Compounding the troubling upward tilt of the rate cut, the Toomey proposal would apparently pay for the rate cut through a limitation on tax expenditures that is itself regressive.

Feldstein's estimates of his basic plan show that:

As an illustration of the equity problems the proposal would create, consider two taxpayers who have different levels of income but identical mortgages and the same amount of other tax preferences.  Under the Feldstein plan, the high-income taxpayer would get to keep more of his or her mortgage interest deduction than the lower-income taxpayer would be permitted to do.

An unnamed GOP aide told The Hill[5] that the tax expenditure limitation in the Toomey plan would apply only to people in the top two brackets.  This statement, however, does not square with the numbers.  The Tax Policy Center estimates that a Feldstein-like tax expenditure cap only for high-income people (those with incomes above $200,000 for singles and $250,000 for married couples, which is a close approximation to the top two tax brackets), would raise $519 billion over ten years, compared to the current-policy baseline, [6] and $48 billion in 2015.  But TPC also estimates that the Toomey rate-cut proposal would cost more than $150 billion in 2015 alone.[7]

Moreover, both of these numbers are conservative.  Take the $48 billion tax expenditure number first.  The revenue saved from reducing tax expenditures is directly tied to tax rates:  the higher the tax rates, the higher the savings generated from reducing tax deductions because the value of a deduction is determined in large part by the tax rate.  (A $1,000 deduction, for example, is worth $350 to a person in a 35 percent tax bracket but just $280 for a person in a 28 percent bracket.)  Eliminating the deduction tied to the 35 percent rate generates more revenue for the government.  The TPC score of savings assumes a top rate of 35 percent.  The Toomey plan, however, drops the rate to 28 percent.  This means the same cuts in tax expenditures would generate lower savings under these lower rates.

Now take the $150 billion number (the cost of the rate cut in 2015).  This revenue estimate, as TPC has highlighted, does not assume any change in Alternative Minimum Tax (AMT) rates.  This means that part of the promised rate cut is being assumed to be grabbed by the AMT.  If in the end, the plan sponsors wanted to deliver the fully promised rate cut, by correspondingly cutting the AMT rates, then the revenue cost would be much higher.

In other words, at a minimum, the rate cut would cost more than three times the amount of revenue that a Feldstein-like approach would raise if it were restricted to high-income households.  This strongly suggests that the Toomey plan's tax expenditure limitation, like the limitation in the Feldstein proposal, would not be limited to the top two brackets.  Otherwise, the numbers do not add up.

[1] Steven Ohlemacher, AP, November 17, 2011.  "The aide confirmed that Toomey's plan is closely modeled after a proposal by three experts at the National Bureau of Economic Research, a private research organization perhaps best known for deciding when recessions begin and end. The three experts are Martin Feldstein, a Harvard University professor who was President Ronald Regan's chief economic adviser; Maya MacGuineas, president of the Committee for a Responsible Federal Budget; and Daniel Feenberg, a research associate at the bureau."  For details of the Feldstein plan, see Martin Feldstein, Daniel Feenberg, Maya MacGuineas, "Capping Individual Tax Expenditure Benefits," NBER Working Paper 16921, http://www.nber.org/papers/w16921.pdf.  For other descriptions of the proposal (which are somewhat more explicit about what it caps and what is excluded), see Martin Feldstein, "Raise Taxes, but Not Tax Rates,"New York Times, May 4, 2011,http://www.nytimes.com/2011/05/05/opinion/05feldstein.html; http://www.taxpolicycenter.org/publications/url.cfm?ID=1001548.

[2] Even this modest deficit reduction requires an asterisk because it is compared to a baseline that assumes all of the Bush tax cuts are made permanent.

[4] Feldstein and his co-authors have recognized that their basic proposal is regressive and proposed a possible modification to it that would increase the burden on taxpayers with AGI above $500,000.  However, while that modification would ensure that the highest-income people (those with AGI over $500,000) pay at least as much as upper-middle income taxpayers as a percentage of income, it would do nothing to protect low- and moderate-income taxpayers and still hit many of them rather hard.

[7] Howard Gleckman, "A 20 Percent Tax Rate Cut Would Blow a Huge Hole in the Budget," TAXVOX, November 15, 2011.  Even the modified version of the Feldstein proposal would, according to Feldstein and his co-authors, increase the revenues that the basic proposal generates by only $17.5 billion in 2012, so would still fall well short of what is required to pay for the Toomey rate cut proposal.