The nutrition titles of the House- and Senate-passed farm bills are very similar over the first five years that the farm bill would be in effect (2008 through 2012).  The House bill invests $3.9 billion — and the Senate $4.1 billion — over five years in food stamps and the Emergency Food Assistance Program (TEFAP).  In addition, the policy changes that the two bills would make are very similar — ending erosion in the purchasing power of food stamps, supporting work and savings, and increasing federal support for commodity purchases for food banks and emergency feeding organizations.  The Senate bill also includes a few additional proposals, such as raising the asset limit and several useful program simplifications with modest costs.

There is, however, a profound difference between the House and Senate nutrition titles.  The House bill would make these provisions permanent law.  Under the Senate bill, all the major benefit improvements would terminate after 2012, and policies would return to today’s law, cutting benefits to millions of poor families, seniors and people with disabilities.  (See Figure 1.) 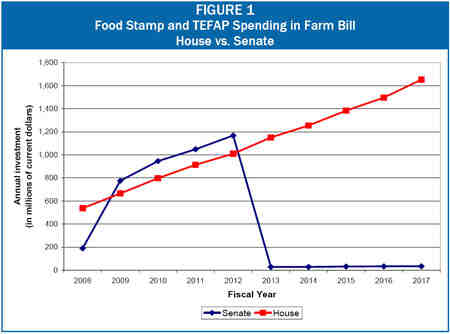 Unless Congress later took action to extend the policies, more than 10 million recipients would experience benefit cuts in 2013, and more than 300,000 low-income people would be cut off food stamps altogether under the Senate approach.

The budget context in 2012, when Congress would face these cuts, is not likely to make it any easier to extend the policies.  Either the Congress would still be following pay-as-you-go rules, in which case offsets would still be needed and likely would be even scarcer than today, or Congress and President would have broken the pay-as-you-go rules in order to extend or enact large, unpaid for tax cuts or spending increases, in which case the deficit would be larger and pressures to reduce spending greater.  Furthermore, in either case, the onset of the retirement of the baby boomers and continued increases in health care costs would likely result in more unfavorable budget environment.

Low-wage families, however, will be in no less need of help purchasing an adequate diet after 2012.  The highest priority for the farm bill conference in the nutrition area is to make the 2008 to 2012 benefit improvements permanent.

[1] Legislation enacted in 1996 froze the food stamp standard deduction at the 1995 level of $134 a month.   Food stamp benefits currently average only about $1 per person per meal.  As a result of this freeze food stamp benefits for most households do not keep pace with need.  For more information see Families’ Food Stamp Benefits Purchase Less Food Each Year, at https://www.cbpp.org/3-6-07fa.htm.

Topics:
Food Assistance, SNAP Basics
Stay up to date
Receive the latest news and reports from the Center