The current economic slowdown has coincided with a sharp increase in food prices, which has exacerbated hardship for many low-income families who also face high gas prices (and will face high home heating bills this fall and winter).  Food stamp benefit levels are supposed to be sufficient to enable households to afford the “Thrifty Food Plan,” a low-cost but nutritionally adequate diet established by USDA.[1]  Since 1996, however, when Congress cut food stamp benefits, the level of benefits has fallen short in almost every month.[2]  (See figure 1.)

Periods of rapid food price inflation — such as the last several years — exacerbate this problem because food stamp benefit levels are based on food price data that become increasingly outdated over the course of the year.  For example, the actual cost of the foods in the Thrifty Food Plan for a household of four was about $430 more over the course of fiscal year 2008 than the Food Stamp Program assumed would be necessary to purchase these foods.  Low-income households had to make up the entire difference on their own.  With food prices expected to continue rising in fiscal year 2009, food stamp benefits will likely once again be insufficient unless Congress enacts a temporary benefit increase. 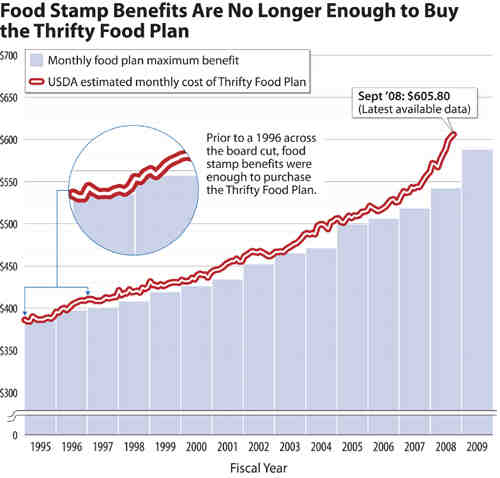 As a result of this lag, the rapid increase in food prices during fiscal year 2008 rendered food stamp benefit levels increasingly inadequate to enable households to purchase the Thrifty Food Plan.  By September 2008, the latest month for which USDA estimates are available, the cost of food had increased 11.8 percent since June 2007, and maximum food stamp benefits were $64 a month below the cost of the Thrifty Food Plan for a family of four.[4]  (See figure 2.)

On October 1, 2008, maximum food stamp benefits were increased by 8.5 percent for fiscal year 2009, a significant amount that reflects the large rise in food costs between June 2007 and June 2008.  It appears, however, that food prices will continue rising rapidly in the year ahead.  Just between June and September 2008 (the most recent month for which data are available), the estimated cost of the Thrifty Food Plan grew by 3 percent, or about $18 a month for a family of four.

USDA’s Economic Research Service projects that food price inflation over the next year will be 4 to 5 percent — higher than average, but less than the growth over the past year. [5]  If USDA’s projections prove correct, by December food stamp benefits will fall about $25 behind the monthly cost of the Thrifty Food Plan for a family of four; by next summer the monthly gap will approach $40.  If food inflation over the next year equals this year’s higher levels, the shortfalls will be close to twice as large. 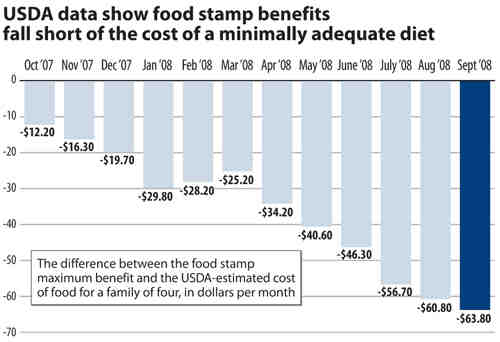 The food stamp improvements in the recently enacted farm bill will provide some relief, giving about half of all food stamp recipients roughly $1 to $5 a month in additional benefits in 2009.  (The farm bill changes become more significant over time.)  But that increase will not fully cover the increased cost of food over the fiscal year if food inflation remains high next year.  Moreover, many of the poorest families who struggle the most to afford sufficient food will not receive any of the increase.

The above discussion focused on maximum food stamp benefits, or the benefits for which households with no net income qualify.  Food stamp benefit rules assume that families will pay 30 percent of their net income toward their food costs, so most food stamp households receive the maximum benefit minus this 30-percent family contribution.[6]  However, rising food prices over the course of the year are forcing families to pay significantly more for food.

For example, consider a typical working family of four that received food stamps in fiscal year 2008.  Such a family earned about $1,150 a month and had about $700 a month in housing costs; to help pay for food, it received a food stamp benefit of $402 a month, or about $3.35 per person per day.  The cost of the Thrifty Food Plan for a family of four in June 2007 (the month on which food stamp benefits for the fiscal year were based) was $542, so to afford this diet, the family was expected to pay $140 ($542 – $402) a month out of its earnings.

However, because the family’s food stamp benefits stayed the same over the course of the year while food prices went up, it had to make up the entire price increase out of its earnings (or cut back on the quantity or nutritional value of its food purchases).  Over the federal fiscal year 2008, the family had to make up a total of about $430 out of its income in order to afford the Thrifty Food Plan; this brought its monthly contribution up from 30 percent of its net income to an average of 38 percent over the year, and as high as 44 percent by the end of the year.

Low-income families face stark budget choices — between affording an adequate diet and paying for rent and utilities, putting gasoline in their car, and meeting other household living expenses.  The goal of the Food Stamp Program’s benefit structure is to enable low-income families to obtain a nutritionally adequate, basic diet.  However, the program is falling short of this goal, and the problem is especially acute in years of high food price inflation.  If families manage this shortfall by buying less-nutritious foods, it can have negative health consequences for low-income children and adults, as research indicates that many low-cost, energy-dense foods that contribute to obesity are cheaper than nutritious foods, such as fruits and vegetables.[7]

Congress Has Opportunities to Act

The interventions Congress should consider regarding food stamp benefits differ for the long and short term.

Such an approach would carry a significant cost: setting food stamp benefits at 105 percent of the Thrifty Food Plan, for example would cost about $3 billion a year, according to CBO.  But addressing this problem is essential for the Food Stamp Program to maintain its core purpose of ensuring that all Americans have access to a nutritious diet.

In the short-term, however, more dramatic action is called for that would both ensure that food stamp benefits keep pace with rapidly rising food prices this year and provide a low-cost, highly effective economic stimulus.

Many economists are calling for another economic stimulus package in the face of what could be the deepest economic downturn since the Great Depression.  As part of such a package, Congress should include a large — perhaps 10 to 15 percent — temporary increase in food stamp maximum benefits.  Economists have ranked a temporary food stamp increase as one of the fastest, most effective forms of economic stimulus.[9]

A benefit increase in this range would cost $5 to $12 billion, depending on how long it remained in effect, but would generate even greater economic stimulus.  USDA’s Economic Research Service estimates that a $5 billion temporary increase in food stamp benefits would result in $8.2 to $9.2 in economic stimulus.  ERS has also written that using the food stamp program for economic stimulus would “result in increased demand and production in the agriculture and food sectors, stabilizing economic activities in these key rural sectors during downturns in the economy.”[10]

A temporary food stamp benefit increase would get money into the economy very quickly.  As CBO Director Peter Orszag and others have explained, food stamps could inject stimulus into the economy considerably faster than nearly all other options available to Congress, putting benefits into the hands of more than 13 million households who would spend the benefits almost immediately.  Because benefit levels are adjusted each year to reflect food inflation, state computer and operational systems are already equipped to make a relatively swift change in benefit levels.  And, eighty percent of food stamp benefits are spent within two weeks of receipt; 97 percent are spent within a month.

[1] Effective October 1, 2008, the 2007 farm bill renamed the Food Stamp Program the Supplemental Nutrition Assistance Program (SNAP).  The program rules are substantially the same (with improvements from the farm bill), but the name is new.  This paper uses the term “food stamps,” since the new name is not yet widely known.

[5] See USDA, Economic Research Service, Analysis and Forecasts of the CPI for Food, projections as of September 19, 2008, http://www.ers.usda.gov/Briefing/CPIFoodAndExpenditures/consumerpriceindex.htm

[6] This paper assumes that households can afford a sufficient diet with the amount of the Thrifty Food Plan and that no more than 30 percent of a household’s net income can be available to purchase food.  Some may argue that that the Thrifty Food Plan is more than sufficient and provides a cushion to absorb the increased cost of food, or that low-income families can easily pay more than 30 percent of their available income for food, but evidence points to the contrary.  Studies have found that the Thrifty Food Plan may not be sufficient for families to purchase an adequate diet, especially in urban areas where food prices are higher. See Julie Thayer et al., “Coming Up Short: High Food Costs Outstrip Food Stamp Benefits,” Children’s Sentinel Nutrition Assessment Program, September 2008, http://www.c-snap.org/upload/resource/RCOHD_Report_Final.pdf.  In addition, the 30 percent household contribution rate was set more than 30 years ago.  Since then the rate of increase in the cost of other items, such as housing, transportation, and health care, has outpaced the growth in food prices, calling into question whether most households can set aside 30 percent of their net income to purchase food.

[8] Many have recommended using a higher, more realistic, food plan as a means to ensure that food stamp benefits are adequate to purchase a healthy diet.

[9] The stimulus proposals the House and Senate Democratic leadership unveiled in September followed this approach.  The Senate plan called for a 10 percent increase in benefits for FY09, which would boost benefits by about $5 billion over the next year, while the House plan would boost benefits by 5% in FY09 for a cost of about $2.6 billion.  For more information on these stimulus packages, see Sharon Parrott, et. al., “Key Components of House and Senate Economic Recovery Packages Would Boost the Economy and Provide Needed Relief to Struggling Families,” Center on Budget and Policy Priorities, September 26, 2008, https://www.cbpp.org/9-26-08bud.htm.

[10] Mark Zandi, Chief Economist for Moody’s Economy.com, finds stimulus effects of food stamps would be in a similar range, generating $1.73 in increased economic activity for each $1.00 in cost, and says that a temporary increase in food stamp benefits is the most effective stimulus measure on the table.  Similarly, Martin Feldstein, a leading Republican economist who was chair of President Reagan’s Council of Economic Advisers, endorsed a temporary food stamp increase earlier this year because it targets low-income people.