SNAP Helps 1.3 Million Low-Income Veterans, Including Thousands in Every State

About 1.3 million veterans live in households that participate in SNAP (formerly food stamps), CBPP analysis of data from the Census Bureau’s American Community Survey finds.[1] In every state, thousands of low-income veterans use SNAP to help put food on the table. Florida has the largest number of veterans participating in SNAP (116,000), followed by Texas (97,000) and California (94,000) . In Oregon, Rhode Island, West Virginia, and Washington, D.C., at least 10 percent of veterans live in households that received SNAP in the last year. (See Table 1 for state-by-state data.)

"In every state, thousands of low-income veterans use SNAP to help put food on the table."

The 1.3 million figure, an annual average for the 2016-2018 period, represents veterans who received SNAP at any point during the previous year. For low-income veterans, who may be unemployed, working in low-wage jobs, or have disabilities, SNAP provides an essential support that enables them to purchase nutritious food for their families. Nationwide, SNAP is a powerful anti-hunger and anti-poverty tool: it lifted 7.3 million people above the poverty line in 2016, including 3.3 million children.[2]

While veterans are a diverse group, many veterans face challenges making ends meet. Evidence is mixed about how veterans fare overall in the labor market, but some evidence shows worse outcomes for some groups, particularly among the youngest veterans when transitioning from service. Young recent male veterans have higher unemployment rates and lower labor force participation rates than otherwise-similar civilians, according to a 2017 Congressional Budget Office report — a finding consistent with earlier research.[3]

Higher unemployment rates among young veterans may simply reflect the fact that they need some time to search for a job after leaving military service.[4] But young veterans may face barriers to employment such as little work experience beyond military service, trouble finding employment that matches their skills, discrimination by employers, or lack of support for those with disabilities.[5] Some evidence suggests that veterans struggling to find jobs that match their skills may experience more job dissatisfaction and turnover.[6]

Some veterans also face challenges from physical and mental health conditions related to their service that can affect their well-being. For example, some conditions that are more prevalent among returning recent veterans, such as traumatic brain injuries or post-traumatic stress disorder, have been linked to negative outcomes such as reduced labor force participation, increased risk of poor health and related health conditions such as depression, and worse quality of life.[7] More than two-fifths of veterans who served in September 2001 or later reported a service-connected disability in 2018, and nearly half of this group had a disability rating that was severe. Recent veterans with a service-connected disability have a lower labor force participation rate than those without one.[8]

Due to these and other factors, some veterans struggle to meet basic needs. About 38,000 veterans were experiencing homelessness in January 2018, or about 8.6 percent of all homeless adults, according to the Department of Housing and Urban Development’s annual point-in-time survey.[9] Another study found that about 1 in 4 recent veterans surveyed who sought health care through the Minnesota health care system reported food insecurity, or inadequate access to sufficient food; veterans who were younger, had lower incomes, or had been lower on the military pay scale (among other characteristics) were more likely to be food insecure.[10]

About 20 percent of households receiving help through the charitable food assistance network (which includes food banks, pantries, and shelters) include a veteran, according to a study from Feeding America.[11] Another recent study found that while veterans overall have similar rates of food insecurity as civilians, veterans who served since 1975 have a greater risk of food insecurity.[12]

On average, veterans are less likely to participate in SNAP than the overall population, but many veterans who are most likely to be food insecure, including those who are young, less educated, or unemployed, are more likely than other veterans to participate.[13] For veterans struggling to overcome obstacles to feed their families, SNAP makes a crucial difference.

Notes: Estimates are for veterans living in households that received any SNAP income during the past 12 months. Estimates of SNAP participation in a given month would be lower. Estimates use three-year averages due to small sample sizes in some states in one-year data; these three-year estimates are rounded to the nearest thousand and may not add up to totals.

CBPP analyzed the 2016-2018 American Community Survey Public Use Microdata Sample (ACS PUMS) for this state-level analysis. Veterans were identified as individuals who indicated that they had ever served on active duty in the U.S. Armed Forces. The figures presented here represent our best estimate of the number of veterans living in households that receive SNAP at some point during the year.

The analysis combines data for three years (2016 through 2018) to improve the reliability of the state estimates. The figures, which total 1.3 million veterans nationwide for the three-year average, refer to veterans living in households where anyone received SNAP benefits at any time in the past 12 months. The ACS surveys housing unit addresses and residents of group quarters facilities, including shelters. It omits any homeless individuals who are not staying at an address (e.g., with friends or family) or at a shelter at the time of survey. Given the transient nature of this population, the ACS likely undercounts the homeless, including homeless veterans.

[1] We defined veterans as those individuals who indicated they have ever served on active duty in the U.S. Armed Forces.

[3] Congressional Budget Office, “Labor Force Experiences of Recent Veterans,” May 2017, https://www.cbo.gov/system/files/115th-congress-2017-2018/reports/52418-laborforceveterans_0.pdf. Recent veterans here refer to veterans who left active-duty service since September 2001. This report compared labor force outcomes among veterans to predicted rates among civilians based on demographic characteristics. While this report found similar labor force participation rates and unemployment rates between veterans and civilians ages 22 to 44 in their analysis, they found greater differences between the youngest veterans, ages 22 to 24, and similar civilians. Jennifer Humensky et al., “How Are Iraq/Afghanistan-Era Veterans Faring in the Labor Market?,” Armed Forces and Society, June 19, 2012, http://journals.sagepub.com/doi/abs/10.1177/0095327X12449433 found a greater odds of unemployment among veterans ages 18 to 24. 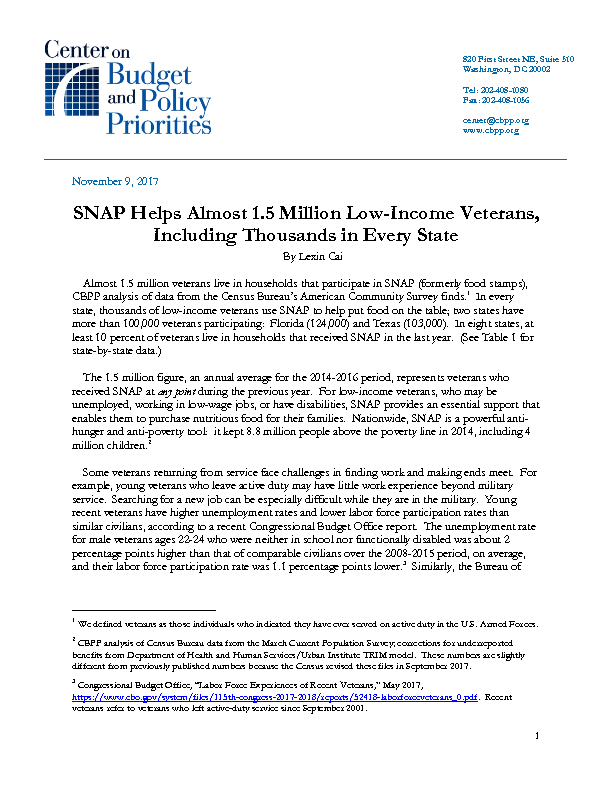