Misunderstandings about two different types of tax rates often create confusion in discussions about taxes. A taxpayer’s average tax rate (or effective tax rate) is the share of income that they pay in taxes. By contrast, a taxpayer’s marginal tax rate is the tax rate imposed on their last dollar of income.

Taxpayers’ average tax rates are lower — usually much lower — than their marginal rates. People who confuse the two can end up thinking that taxes are much higher than they actually are.

Under a Progressive Tax System, Marginal Rates Rise With Income

Average Tax Rate Is Generally Much Lower Than Marginal Rate

As an example, the graph below shows a married couple with two children earning a combined salary of $110,000. They face a top marginal tax rate of 22 percent, so they would commonly be referred to as “being in the 22 percent bracket.” But their average tax rate — the share of their salary that they pay in taxes — is only 6 percent, as explained below.

An individual’s average tax rate tends to be much lower than his or her marginal tax rate for three main reasons.

1. Because of deductions, not all income is subject to taxation.

2. The top marginal tax rate applies only to a portion of taxable income.

The couple’s resulting tax liability — before credits are taken into account — is $10,324.

3. Credits directly reduce the amount of taxes a filer owes.

Taxpayers subtract their credits from the tax they would otherwise owe to determine their final tax liability. In our example, the couple can claim the Child Tax Credit for both children, further reducing their tax by $4,000.

Our example couple is left with a final tax liability of $6,324. Dividing that amount by the couple’s total income ($110,000) results in an effective tax rate of 6 percent. 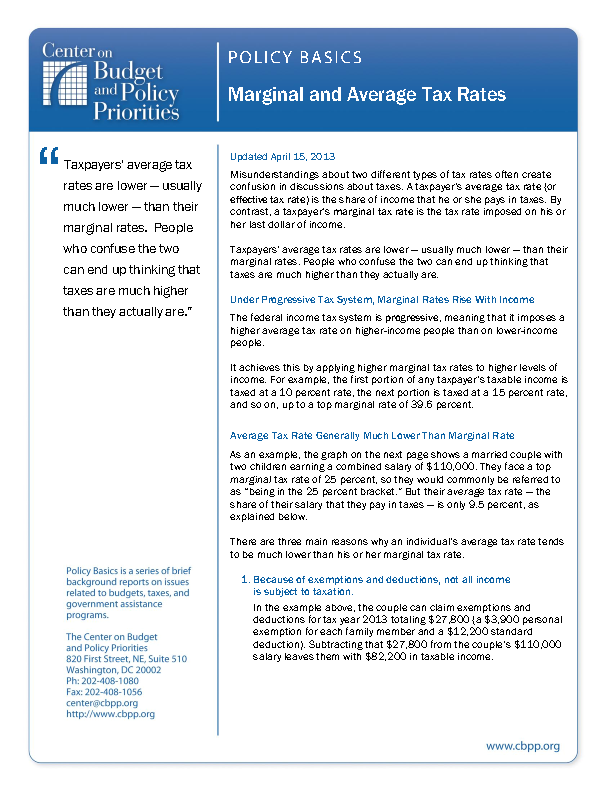