A centerpiece of the 2017 tax law is a new, 20 percent deduction for certain “pass-through” income, or income from businesses such as partnerships, S corporations, and sole proprietorships that business owners claim on their individual tax returns.[1] Before the 2017 law, this type of income was generally taxed at the same individual tax rates as the business owner’s labor income. The new deduction effectively reduces the marginal individual income tax rate on this income by one-fifth, to well below the rate on labor income, such as that from wages and salaries.

The pass-through deduction is a prime example of the 2017 tax law’s three fundamental flaws: it is heavily tilted toward the wealthy, loses significant revenue at a time when we need to be raising revenue, and makes it easier for wealthy people to game the tax system. It also promotes “workplace fissuring,” which could threaten wages and workplace standards.[2] For these reasons, former head of the Joint Committee on Taxation (JCT) Ed Kleinbard recently called it “Congress’ worst tax idea ever.”[3]

The pass-through deduction effectively cuts the marginal individual income tax rate on pass-through income by 20 percent. While the 2017 law’s proponents have said the deduction is designed to help “small business,” it is heavily tilted to the wealthy and big business: 61 percent of its benefits will go to the top 1 percent of households in 2024, JCT estimates (see chart). A mere 4 percent will go to the entire bottom 67 percent.

This regressive impact is baked into the deduction’s basic structure, for three reasons:

The 2017 tax law will cost $1.9 trillion from 2018 to 2027, according to the Congressional Budget Office (CBO). This estimate accounts for the additional economic growth that CBO estimates the law could generate, as well as the interest costs from the new debt that the law will incur. The pass-through deduction is a major contributor to this revenue loss. JCT estimates that the deduction will cost more than $50 billion per year and will make up more than a fifth of the law’s overall cost beginning in 2021. Like other elements of the law, it is set to expire after 2025, but leading Republicans want to make it permanent without offsetting the cost.

These large revenue losses are irresponsible given the nation’s fiscal challenges over the next several decades, such as the aging of the population, health care costs likely continuing to rise faster than the economy, interest rates returning to more normal levels, potential national security threats, and challenges such as large infrastructure needs that cannot be deferred indefinitely. The nature and magnitude of these fiscal pressures will require revenue to rise as a percent of the economy to prevent an unsustainable increase in the nation’s debt ratio over coming decades.

The pass-through deduction could wind up being even more expensive and delivering larger tax cuts to high-income filers than current estimates show. That’s because it creates a significant gaming opportunity: high-income individuals may be able to secure very large tax savings by converting their labor income into pass-through business income to take advantage of the deduction. Indeed, a recent study found that about three-quarters of high earners’ pass-through income is a form of labor income and thus should be taxed at ordinary income tax rates.[4]

The 2017 tax law includes complex “guardrails” that are supposed to prevent this and other types of abuse, but they are arbitrary. For instance, a last-minute change to the tax bill excluded architects and engineers from the list of “professional services” that cannot receive the deduction. The law’s drafters provided no rationale for the change and simply appeared to favor some industries over others. As New York University law professor David Kamin noted, the deduction “represents the very worst kind of tax policy, picking winners and losers haphazardly in a complex tax provision, and then generating significant incentives for people to rearrange their businesses to try to get on the right side of the line.”[5]

The guardrails are not only arbitrary but can also be avoided. For example, assume a bank earns roughly equal shares of its income from collecting deposits, making mortgage loans, and giving financial advice to clients. The first two forms of income can qualify for the deduction, but the third can’t. If the bank keeps its current structure, all of its income would be ineligible for the deduction because the disqualifying activity constitutes too large a share of the bank’s income. Yet, if it moves the financial advice business into a new company and keeps separate accounting records, it can likely qualify for the deduction on the other two-thirds of its income.

For two reasons, the pass-through deduction may also contribute to “workplace fissuring,” in which firms obtain the services of workers without hiring them directly. First, it provides a tax break to workers hired as independent contractors, so employers can use it to entice new hires to accept positions as contractors — meaning they wouldn’t have the legal protections and employer-provided benefits (such as the minimum wage and health insurance) that traditional employees have. Second, the deduction could encourage firms to outsource work, since the owner of an outside contractor (such as a janitorial firm) is eligible for the deduction while an in-house manager is not. The owner can share these tax savings with the lead firm by offering to do the same work at a lower price. Rank-and-file workers would now work for a contractor firm, which tends to pay lower wages and offer fewer benefits. 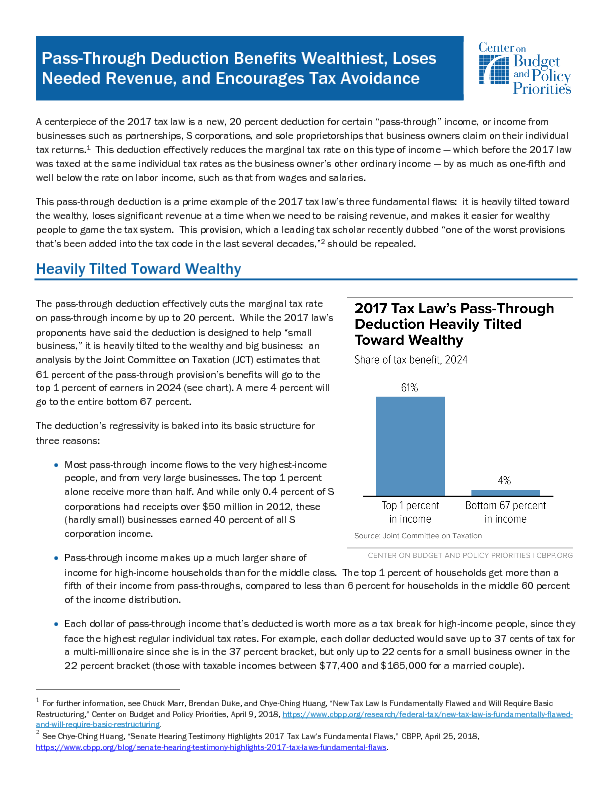