The latest projections from the Congressional Budget Office (CBO) confirm what we already knew:  the federal budget is on an unsustainable path. [1]  If we continue current policies — including a further extension of the Bush tax cuts, which policymakers recently extended through 2012 — deficits will remain high throughout the decade and the debt will rise to 95 percent of Gross Domestic Product (GDP) by 2021.  If instead policymakers let the Bush tax cuts lapse after 2012, as economists such as Martin Feldstein and Peter Orszag have suggested — or pay for any elements of those tax cuts they want to continue — the debt would barely grow as a share of GDP over the rest of the decade. (Substantial additional steps would be needed to keep the budget from returning to an unsustainable path in the decades after that.)  The choice belongs to Congress.

Huge Deficits and Buildup of Debt Will Continue Under Current Policies

If policymakers continue current policies, deficits will total nearly $13 trillion in the decade between 2012 and 2021.  That figure is larger than the “headline” number in CBO’s report (which shows deficits of $8.5 trillion over that period) because of the rules CBO uses in constructing its baseline.

Those rules, which the George H.W. Bush Administration and Congress agreed upon in 1990, state that the CBO baseline generally should reflect:  (1) a continuation of current laws that govern taxes and mandatory (entitlement) spending, and (2) a continuation of funding for discretionary (appropriated) programs at the current year’s level, adjusted for inflation.

Sometimes, however, current laws fail to reflect current policies.  That has been especially true in recent years because of Congress’s growing tendency to enact legislation on a temporary basis.  In those cases, CBO generally must assume in its baseline that such temporary provisions will expire as scheduled by law, even if Congress’s regular policy has been to extend them.

As a result, CBO’s new baseline assumes the following: 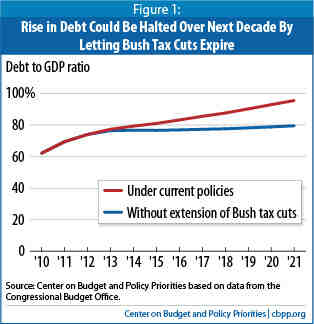 Adjusting the baseline to paint a clearer picture of what will happen if current policies are continued — using CBO’s own estimates for the cost of such policies (including CBO’s scenario for war funding under the planned drawdown of troops) — shows that we are on track to run deficits of nearly $13 trillion over the 2012-2021 decade.  Deficits would run around 5.5 to 6 percent of GDP even after the economy recovers, and debt would climb to 95 percent of GDP.  (See Figure 1.)

There’s nothing novel about adjusting the CBO baseline in this fashion.  Although they differ in details, many other independent budget analysts and institutions — including the Brookings Institution, the Concord Coalition, the Committee for a Responsible Federal Budget, and a recent National Academy of Sciences panel — adopt very similar assumptions in order to depict the budget outlook under current policies.

The 2001 and 2003 tax cuts, enacted in President George W. Bush’s first term, were slated to expire after 2010.  Faced with high unemployment and a fragile economic recovery, policymakers in December extended them for two years, through 2012.  (The legislation also included a two-year extension of some tax cuts included in the 2009 recovery legislation, a one-year reduction in the Social Security payroll tax for employees, a one-year extension of

When these tax breaks expire again, Congress should do the right thing and either let them lapse — for everybody, not just upper-income people (those with incomes over $200,000 for an individual or $250,000 for a couple) — or pay for those tax-cut measures it wishes to extend.  (It would, in fact, be desirable to continue some elements of the tax cut, while offsetting their cost.)  By late 2012, the economy should have recovered sufficiently to absorb that reduction in purchasing power.  And by that one simple step, Congress would put deficits and debt close to a sustainable path for the next decade.

By itself, of course, that action wouldn’t solve our fiscal challenges.  Congress ought to tackle fundamental tax reform in order to make the tax code simpler and fairer while also ensuring that it raises more revenue than the federal government would collect under permanent law (that is, without the Bush tax cuts).  In addition, Congress will need to use findings from demonstrations, pilots, and research on cost containment conducted under the health reform law to take strong steps to slow the growth of health-care costs throughout the U.S. health care system, in public-sector and private-sector health care alike; these rising costs are the greatest threat to the nation’s fiscal future.  And Congress needs to address the long-term imbalance in Social Security, which poses a smaller but still significant challenge.

Any changes in eligibility or benefits in Medicare and Social Security will need to be designed very carefully and phased in gradually, with ample notice to workers and recipients.  Letting the Bush tax cuts lapse would stabilize the debt quickly and give policymakers time to get the rest of the job done right.