A needed extension of federal emergency jobless benefits was absent from this week’s budget agreement, potentially leaving almost 5 million jobless workers in the lurch over the next 12 months, according to Department of Labor estimates.[1]  Failure to extend the Emergency Unemployment Compensation (EUC) program would affect jobless workers in every state.

In all, an estimated 4.9 million workers would lose out on EUC benefits by the end of 2014. 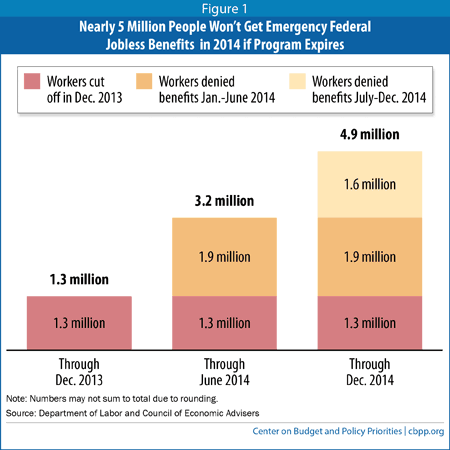 Emergency federal UI programs like EUC are designed to phase down as the labor market improves and eventually expire.  The phasing down is underway — the maximum number of weeks of EUC plus regular UI has fallen from 99 to 73, and that maximum is available in only a handful of states — but it is too soon to let the program expire.

While the unemployment rate has fallen from its recession peak to 7.0 percent, this measure alone provides too optimistic a picture of the overall health of the labor market:[3]

Table 1 shows the Department of Labor’s estimates of the number of people in each state that would be affected over the next 12 months if EUC is allowed to expire.  In 11 states, more than 100,000 people would lose access to benefits.

[1] The Council of Economic Advisers and the Department of Labor, “The Economic Benefits of Extending Unemployment Insurance,” December 2013, Figure 7, p. 18,  http://www.whitehouse.gov/sites/default/files/docs/uireport-2013-12-4.pdf.

[2] Adapted from the Council of Economic Advisers and Department of Labor report.

[3] Chad Stone, “On Emergency Jobless Benefits, Don’t Be Fooled by November’s Drop in Unemployment,” Off the Charts blog, Center on Budget and Policy Priorities, December 10, 2013, http://www.offthechartsblog.org/on-emergency-jobless-benefits-dont-be-fooled-by-novembers-drop-in-unemployment/.